It’s no secret that Game Revolution has a tendency to be tougher on games than
most other sites. This is a source of pride for us, though people often assume
that since we’re harsh, we must be pessimists. Not true whatsoever. In fact, we’re
better described as optimists…disgruntled, misled optimists, to be precise.
Allow me to explain.

You know all that hooey on the back of a game box? You know, the list of amazing features and breakthrough technologies highlighted with hyperbole? While most tend to gloss these things over, we read every single line. Why? Because that’s what the publisher is promising. That’s what we expect to play. In this sense, almost every single game that shows up in the GR office starts off with an “A” grade.

And nine times out of ten, it’s downhill from there. Item by item, the incredible
features listed on the back of the box are slowly disproved. No, those graphics
are not “stunning.” No, it’s not “ultra-realistic.” And no way in hell is that
“revolutionary gameplay,” buddy.

So when a game comes along that fulfills the promises on the back of the box,
we know it’s something special. We know it’s a good buy. And in the case of
NFL2K1, we know it’s a must-have. From its incredible multiplayer to
its fantastic options and gameplay, this is the premier sports title for hardcore
and casual gamers alike.

To better illustrate why you should stop reading this review, click on the big red “Shop” button and slap down some cash on this puppy, I thought it would be nice to go through each of the promises laid out on the back of the game CD. Does Sega hold true to their word?

True. The graphics rock, mainly because they’ve barely changed a thing since
the first one. Extensive mo-capping has led to a game that looks as close to
the real thing as possible. Player-specific accessories – wristbands, shaded
facemasks, etc. – give every player of every team a distinct look. The field
looks great; wear and tear appear in the grass and remain there for the course
of the game. The hit detection is excellent, though occasionally a hand will
poke through a helmet (which looks really freaky on a replay). From the intricate
details to the burly framerate, this is a beauty. In every sense, it’s a gorgeous
game.

You betcha. Perhaps the biggest flaw in the original NFL2K
was the poor running game. You just couldn’t run well, which led to a game of
aerial assault, time and time again. Well, that’s all changed. Developer Visual
Concepts fixed the broken wheel by implementing a collection of new moves. Via
the “power up” (hold down the Turbo button), jukes, straight arms and spins
become more effective and powerful. Running backs are also harder to take down,
as opposed to the one hit kills in the original. Very nice. 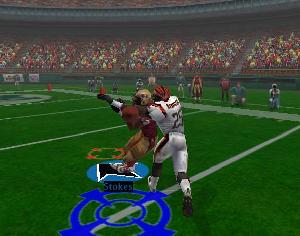 Franchise
Mode – be the general manager and coach of any NFL team with salary caps, retirements,
draft picks and rookie signings.

Yes indeedy. In addition to Season, Exhibition, Practice, and Tournament modes,
you can at last live out your GM dreams through multiple seasons, trading players,
scouting the league and trying to turn your team into a dynasty. This was sorely
missing from the first game and is welcomed with open arms.

Yup. I combined these two because normally these are just staple features in
every sports game under the sun. The gameplay is still amazing, and the AI seems
to have been tweaked a bit. Be forewarned – stepping up from Rookie difficullty
to Pro is a BIG step. It’s a good challenge for a single player football game,
though, and will give you plenty of time to hone those skills for….

Multi-player Dreamcast to Dreamcast network play over the Internet for up
to eight total players.

Historic. For the first time ever (the Netlink does not count, Sega junkies),
you can play a console system online. Go ahead – throw your hands in the air,
and wave ’em like you just don’t care. That’s what I did.

“So does it work, Ben? Is it all it’s cracked up to be?” Before walking headfirst
into that headache, let me first say that this is not a review of SegaNet. That
will come later. But here’s the gist.

One of the options is “Network” play. Right out of the box, you can click
on a few buttons, get a free SegaNet account (no credit cards needed) for 50
hours of online football. You can also use your own ISP…er…wait…no you
can’t. Using any ISP other than SegaNet results in horribly choppy, unplayable
nonsense.

But get two people using SegaNet accounts playing, and it’s unreal. Just connect
to the servers, pick a region and a lobby and you’ll find an opponent in no
time. Despite the limited speed of the built-in 56k modem, lag is rarely an
issue. It’s just like they’re sitting on the couch next to you, except you can’t
punch them in the nose when they run back your kickoff for a TD. 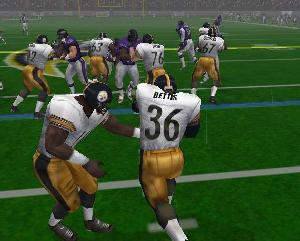 You may not be able to punch them, but you can taunt them via the Dreamcast
keyboard. Frankly, playing NFL2K1 online without a keyboard is FAR less
fun than playing with one. SegaNet doesn’t give you much info about your opponent
(again, most of my gripes with SegaNet itself don’t truly belong in this review),
so occasionally you get one guy with a keyboard and one without. One dishes
out trash talk, the other has to sit and take it. Likewise, you can’t be sure
if your opponent has SegaNet or not, and occasionally you get one guy on SegaNet
and another using a different ISP. This, again, just doesn’t work at all.

I should also note that currently SegaNet does not work in Alaska, Hawaii, or Canada. So anyone named Nanook, Kamehameha or Jean Lemiuex will have to stick with the kick-ass single player.

And there’s even more. You’ll find excellent Player/Play Creation, the return
of the tremendous audio (though those stupid announcers screw up every so often),
and perhaps most importantly, a much better use of the VMU. Now you don’t have
to take up a whole card with one saved game.

Honestly, the occasional clipping error is probably the only noticeable flaw
in NFL2K1 Taken as a whole, the plethora of features included in the
game lead to perhaps the easiest A I’ll ever give. This is an all around
improvement over what was already a stellar game, and the revolutionary multi-player
is something every Dreamcast owner needs to see firsthand.

Don’t believe me? Just read the back of the box. 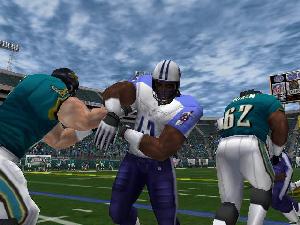 "It's not just another drug show."
Originals 4 weeks ago
9