At first glance, Iggy’s Reckin’ Balls (IRB) may look like one of those sickeningly
cutsie Nintendo games. Well it is, though there’s still a pretty good game amidst
all that cuteness.

The game takes place in the Cho-Dama kingdom where the inhabitants have “no
worries and no bills to pay.” Where is this place and how do I get there? Oh yeah,
there’s also these Sacred Towers there, too. Enter Iggy and his friends, whose sole
purpose is to race up each and every one of these towers therby destroying (reckin’)
it.

Iggy’s Reckin’ Balls is sort of a cross between a cute racing game like DK
Racing and a platform/puzzle game. You’ll need to run and jump your way up the
towers, avoiding traps and hazards while trying to figure out how to get to the
next platform and staying in the lead. You have at your disposal the use of a grappling
hook that allows you to climb up ledges as well as grabbing your opponents and
throwing them off the track.

There are 10 races in each level with the standings based on a point system.
Whoever has the most points at the end of 10 races wins that level. The individual
track design is excellent, keeping the pace of each race really frantic. Modes
include regular racing, a battle mode which is kind of a free-for-all brawl where the
last ball standing … er, rolling…wins, and a time trial mode.

Graphics are first-rate. There’s some incidental pop-up during the game, but nothing really
blatant. The track textures look good, but you’ll be begging for some variety after
a few levels. The backgrounds are fabulous and everything else looks clean and is
drawn beautifully.

Music comes courtesy of a pseudo-techno soundtrack which isn’t all that bad but
gives the game more of the cutsie-kiddie feel. Sound effects are decent, much like
Diddy Kong where each character’s speech is limited to whoops, cheers, and
taunts. And like Diddy Kong, the female character’s taunts get really annoying
after a while and you wish you could go into the game and grab that silly wench
and…well, you get the idea. (Been watchin’ a little too much South Park, Tim? – Ed.

The depth in this game is surprising and welcome. First off, mastering special
grappling techniques requires a bit of practice as well as some fancy joystick-
twirling. There are loads of cool ways to grab, toss, spin, and throw your opponent
off the towers, but most of these take practice, practice, practice. The tracks
themselves can be tricky too, with numerous shortcuts and hidden paths to find in
order to gain an advantage. Add to this nine secret characters and six hidden
tracks and you’ve got quite a formidable game on your hands. 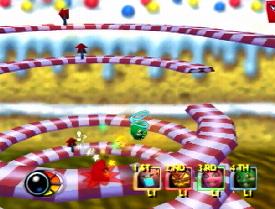 Iggy’s Reckin’ Balls is a lot more difficult than it looks. Part of this is because the
game has a lot of depth with loads of special moves and powerups. Also
contributing to IRB‘s difficulty are the weak controls. Basically, the analog stick moves your
character as well as aiming your grappling hook. This pretty much rules out
moving right to advance your position and grappling left to slow down an
opponent. The controls aren’t absolute so you’ll have to do a lot of adjustments on
the stick as the camera pans to different perspectives as you scale the towers.

Multiplayer is a bit more fun than solo play, but the controls are so unintuitive and
the gameplay so challenging that novice players may give up in frustration easily.
Perhaps the best part of multiplay is throwing an opponent off the track at a
particularly difficult section of the course, thus insuring victory. However, a lot
of games end without you ever getting close enough to the other player to screw
them up. Pretty much a mixed bag here.

Acclaim has done an excellent job putting out first-rate titles for the N64 recently.
WWF War Zone, NFL Quarterback Club, and Bust-a-Move 2 are just a few of their recent successes.
However, Acclaim is running the risk of experiencing “Midway Syndrome” –
when a company puts out an average game and puts so
many secrets in that you end up shelling out a lot of extra money just to
try and find them all. In the arcades, I’ve seen people shell out $20-$30 a day on a
game just trying to find all the secret characters and power-ups and for home
systems you get gouged with those “strategy guides.” But I digress…

Iggy’s Reckin’ Balls is one of those games you’ll either love or hate. I suggest a
rental first and if you like it, IRB will provide you with hours of enjoyment and
solid gameplay.

Another win for PC users.
Games 3 months ago
6