Look at those abs! He must be working out. Review

Look at those abs! He must be working out.

Fame can do funny things to the mind, often convincing celebrities that they’re
talented in something that they’re not. For instance, famous actors often think
that they’re also great musicians. The result? This.
Or this. Or even this.

Likewise, Mario doesn’t consider himself a one-trick pony. So over the past
few years, the lovable mustachioed plumber has gone out of his way to prove
his diversity as an entertainer. He’s raced karts, played tennis, beaten up
other mascots and thrown not one but two major parties. For some reason,
he’s avoided the very things that made him famous in the first place – eating
mushrooms and jumping on turtles.

It’s been about 4 years since Mario explored the world of 3D in Super
Mario 64. Now, Nintendo brings us a Jenny Craig version of the chubby
do-gooder in Paper Mario, marking Mario’s return to his gameplay roots.
With enough role-playing depth to satisfy even the most jaded N64 owner, Mario
has rarely looked this good.

The plot is classic Mario. Evil dino-baddie Bowser has stolen the holy Star
Rod from Star Haven and has captured the seven Star Spirits. With rod in hand
(er, claw) he kidnaps Princess Peach and her palace. As Mario, you must travel
around Mushroom Kingdom freeing the Star Spirits in an effort, once and for
all, to put an end to Bowser’s hi-jinks.

Yeah right. That goddamn overfed turtle has been screwing things up for well
over a decade. He was off the hook for a while when freaky Wario was running
amuck, but like any lifelong criminal he just couldn’t stay out of trouble.
If you ask me, they should really look into the death penalty.

Paper Mario is essentially a classic RPG. You’ll roam the land talking
to the inhabitants, collecting items and solving puzzles. Eventually, you’ll
gain some allies and engage in tons of combat.

The whole “paper” thing really just describes the unique graphical style. Mario and crew are all flat objects, though they exist in a 3D world. The result makes the characters look as if they’re made out of paper. It’s actually quite cool and lends itself well to the limitations of the N64. Hats off to the creativity.

The battle system is turn-based and hearkens back to the epic Super Mario
RPG for the SNES, involving both strategic decision-making and timing. While
you can have up to 7 other party members, only one of them will join you in
battle. You can switch allies in the middle of a fight, but it’s always just
Mario and one other versus the enemy.

The combat is pretty fun, if a bit easy. Mario’s two main stats are Heart Points, which represent your health, and Flower Points, which are used to perform power-up battle moves. The strategy really boils down balancing your power-ups and knowing which of your allies is useful in which situation. By defeating enemies, Mario gains star points. Every 100 star points lets Mario level-up, increasing his stats. Again, very typical RPG stuff. 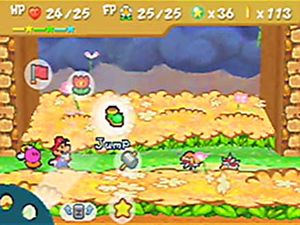 Adding
to the depth is the Badge system. Mario can find over 50 Badges, which he can
equip to boost his stats and gain extra combat moves. Only a certain number
can be equipped at once, so again some strategy is involved in figuring out
which one’s are the most useful for which situations.

Your party members have specific abilities to help you out even when you aren’t in battle, including blowing open walls, carrying you over gaps, and ferrying you across water.

Like any good Mario game, there are plenty of secrets stashed away. Reminiscent
of the legendary Super Mario Bros., every block can hide a treat. Uncovering
every single secret item can take a LONG time.

The puzzles are easily the weakest part of the game. Most puzzles can be solved in a matter of seconds by even the most clueless gamer and really just exist to break up the game flow.

The side-quests are equally pointless, often just leading you from point to
point around the world with a crummy reward at the end. One of your allies is
a mailman, and you actually help him deliver mail by shuffling letters
to and fro. This sort of wild goose chase thing gets annoying and is hardly
worth the effort.

On the flipside, Paper Mario excels where other RPG’s fail due to it’s
terrific world. Anyone vaguely familiar with Mario’s past will instantly recognize
the cast of characters and items. You intrinsically know that mushrooms are
good, that flowers spout fire, and that pipes lead to warp areas. The levels
are colorful and smartly designed. The story is delivered with a good dose of
humor, taking occasional potshots at Mario’s past. The familiarity of the world
is one of the game’s greatest assets, and Nintendo does a great job keeping
its tradition alive.

This also means that there is very little in the way of surprise here, as
the game still relies on just too many tired clichés. If you’re surprised
by a plot twist in this game, you’re probably eating mushrooms again and should
have your head examined.

Still, Paper Mario is a fun game and stands head and shoulders above
most of the dreck the N64 offers these days. Though it gets a bit cute at times,
most gamers should find hours of satisfaction in Mario’s homecoming. Let’s just
hope he doesn’t let it get to his head…the last thing we need is Mario eating
too many mushrooms and singing about LSD,
like Captain Kirk… 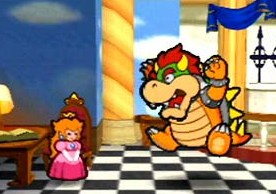 Come on, it's time to go.
Originals 2 months ago
9

Trek to Yomi Review: ‘Like a Samurai With a Dull Sword’

A beautiful game marred by narrative missteps.
9 months ago