Fox Sports College Hoops ’99 could very well be a contender. A contender for the
longest title in video game history, that is. All that’s missing is the ’64’ tag at the
end (see Gex 64) to bring the total up to an impressive eleven syllables.

This game’s not bad if you’re looking for an N64 NCAA basketball game, as it’s the only one. But true b-ball fans will get bored with the simplicity real fast. Couple this with crummy graphics, weak AI, and shoddy gameplay, and you get a game that just can’t compete.

FSCH ’99 is fully licensed by the NCAA, meaning authentic team logos and uniforms.
Actual player names aren’t represented and they’re replaced by fictitious ones or
the programmers’ own names. This seems rather bizarre to me; why not just leave
names out altogether? It’s bizarre playing UNC players named Samson and Houser.

Although the gameplay is easy to pick up, it has its share of problems. Passing is
tricky at best as you only have two options; pass to the player nearest to you or
make a long pass to someone else. Most of the time, passes end up going to
everyone except the player you want.

Steals always end up in a loose ball, making those wonderful steal-fast breaks non-existent. But then again, that pretty much goes with the slow pace of the game.

Although there’s some interesting gameplay options in FSCH 99, they’re really not
all that great. You can choose offensive and defensive plays on the fly, but more
often than not the plays break down before you get a chance to do anything, thanks
to the game’s passing problems. Most of FSCH 99‘s gameplay options don’t do
what they’re intended to. For example, you can do a “first-step” to juke your
opponent as you drive to the basket. This hardly ever works and your player
moves so slowly I doubt he could even juke my granny. I’d gladly give up half of these
options for a turbo or sprint function to speed up the game a bit and make things
more interesting on a fast break. 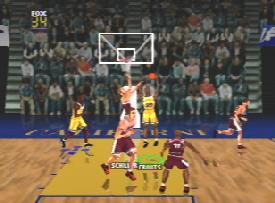 Computer AI is bizarre at best. It seems like every shot you put up has a random
chance of going in no matter how good of a shooting team you’re playing. At other
times, getting five or six treys in a row isn’t completely out of the question.
Naturally, if your team holds the lead in the second half, the computer starts
cheating, such as stealing the ball more frequently and with a greater degree of
success. In close games, the computer never fouls intentionally and would rather
watch you burn out the clock on your way to a 1-point victory.

Graphics are horrendous. Player movements don’t look realistic and all the
players have a dorky way of running. Dunks are hardly ever lined up with the
basket and taking off from the free throw or even the three-point line isn’t unheard
of. Layups look extremely out of place, since your players will sometimes drive
past the basket and then throw up a behind-the-back prayer shot.

In-game commentary would’ve been nice especially since this game is an
unabashed marketing ploy by FOX Sports. There’s some speech in the game
provided by your teammates, who’ll say things like “Pick left!” if they’ve got the
screen set up. It’s pretty useless, since you usually see the screen before
he says it.

In the end, FSCH ’99 isn’t the NCAA game we were waiting for. Besides, why would you shell out fifty bones for this game when you could get something like NBA Live or even Kobe Bryant?

He says the "mistake" won't ever happen again.
News 12 hours ago

Forza Motorsport 8 Xbox One Version Will Be Cloud-Only

Is the next Forza Motorsport coming to Xbox One?
News 3 days ago
8