I hear he still lives with his parents. Review

I hear he still lives with his parents.

First came the Doctor. Julius Erving literally took the game of basketball to new heights and inspired an entire generation of acrobatic hoopsters. Then came His Airness. Michael has done more for the sport than any of his predecessors, and has continued to amaze with his total domination of the game. And now…there’s Kobe.

The not-yet-legal Kobe Bryant has stormed the NBA with an energy and talent
not seen since Jordan’s first flight down the key. His array of moves and skills
has already become the talk of the town. While it isn’t for me to say whether
the man (boy?) will flourish or flop, you just can’t argue with his popularity.

Oddly, there have been few basketball titles for the N64. In fact, the marginal In the Zone ’98 is the only other basketball sim for the N64. While the Playstation boasts a strong list of hoop games (the strongest being NBA Live ’98), someone must have decided that only soccer and football were worthwhile for the N64. But when it comes to timing, few have a better sense than the guys at Nintendo. Just in time for the 1998 NBA Playoffs comes Kobe Bryant’s NBA Courtside, a game featuring the hottest player on the hottest team at the hottest time of the year. Unfortunately, the 19 year old Kobe knows b-ball better than gaming, and while Courtside has some nice new features, it just can’t match the completeness of the top-notch PSX games.

Thankfully, NBA Courtside tries to stay true to the real thing with
5 on 5 simulation ball. All 29 teams are here with full licensing… except
Michael. Though once again Jordan has to be created, every other player in the
league is here in beautiful textured-mapped glory. Rodman looks like Rodman
(scary, but true), Iverson looks like Iverson, minus the corn rows, and Kobe
looks like Kobe (duh). Close-ups look great, and you’ll be hard pressed to find
many polygonal errors. The N64’s graphical power is definitely felt here….

Though not when it comes to movement. Players move stiffly and awkwardly. Where other games boast motion-capture, Courtside boasts some really stupid looking animations. I’ve never seen anyone use their elbows so much when jogging. However, this is only really evident when players run around the court – dunks and rebounds look great, as does shooting. But frankly, NBA Shootout ’98 on the PSX had a better look. Overall, this is a strange mix of good and bad graphics.

Good news/bad news persists in other aspects of the game as well. Take control, one of the most important elements in a sports game. The only way to play Courtside is with the analog controller, which has both merits and faults. For starters, basketball is a game that relies heavily on precision, something that analog control just doesn’t do as well as digital. It gets hard positioning yourself for a rebound or driving the baseline with the dinky Nintendo thumb stick.

On the other hand, analog control allows for varying degrees of movement. Just press lightly to walk the ball up court if you’re trying to kill time, or press harder to blow by the defender and drive the lane. This is an innovative feature, even with it’s faults. You’re basically trading precision for realism. The D-pad is used solely to call offensive sets – there is no way to change the pre-set button configuration. In other words, it’s analog or bust, like it or leave it. 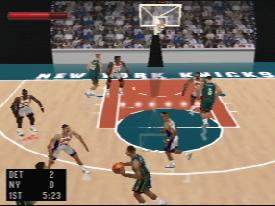 Like its namesake, NBA Courtside definitely has some new stuff to strut. Free throws are no longer based on the ‘T’ meter – again, the analog control comes into play. The new mechanism is intuitive and easy to learn. Another new addition is the ability to spin off defenders. Using the ‘protection dribble’ (ie. backing someone down), you can play with your back to the basket. At the press of a button, you’ll try a spin move towards the basket, though it’s up to you to finish it off when you’re up at the iron.

And finish you can. Kobe won the 1996-7 Slam Dunk contest for a reason, and
all you have to do is play his game for a few minutes to see why. While not
nearly as dunk happy as NBA Jam/Space Jam, NBA Courtside is at
times a high flying dunk-o-rama. I don’t doubt that Kobe can get up there, but
some of these dunks are a bit much (ie. take off at the free throw line, through
the legs, and over Olajuwan). But who cares – this is a video game, not a TNT
broadcast.

Other additions help make this a more defined game. A fatigue/ability meter for each player is depleted when you pull certain moves. For instance, dribbling behind your back takes off some energy, as does holding down the ‘speed burst’ button. This makes it more important to time your juke moves and drives and is a worthy addition to the b-ball genre.

The AI is equal parts excellent, stupid, and irritating. CPU controlled teams play good enough defense to keep you out of the paint, though some players (like Kobe) can make it to the basket almost every time. Games usually take on a realistic feel – no blowout 250 point score fests like NBA Shootout ’98. But like Shootout, blocks and steals are too common while rebounding is sloppy. In all, the good and bad tend to weigh each other out.

The sound is pretty bad. There’s no play-by-play at all, and the announcer only pipes up when people score. The in-game music is dumb and sounds out of tune. The background sounds are okay, but it’s just too little in the wrong place. This is one reason why CD’s are better than cartridges…

A standard feature in most sports games these days is Player Creation, and indeed you’ll find that here. But unlike other games that give you a set number of skill points to use in building a character, NBA Courtside lets you decide how good of a player you want to make. I made a 7’10”, 350 pound point guard with 30 foot range and maximum ability in every category. Basically Godzilla in a Laker uniform. Sort of defeats the purpose (but can crush Tokyo).

Hey, I love Kobe. I love the Lakers. They’re my favorite team and have been for years. But Kobe Bryant’s NBA Courtside just isn’t as good as it could have been. Considering what’s out there, this is the best choice for the N64, but not the best choice overall. Much like the player, this one could use a few more months in the oven.

Mixed graphics Cool new features Variety of minor flaws Sound sucks Can he even grow a mustache yet?
Friday

Mixed graphics Cool new features Variety of minor flaws Sound sucks Can he even grow a mustache yet?
February 10

Mixed graphics Cool new features Variety of minor flaws Sound sucks Can he even grow a mustache yet?
February 21

Mixed graphics Cool new features Variety of minor flaws Sound sucks Can he even grow a mustache yet?
February 24

A mixed bag for Mario fans.
Games 2 years ago
10

A whale of a time.
Games 3 years ago

Thankfully this does not feature Frequency Vibrations.
Games 3 years ago