Clive Barker has been relatively quiet since his days as the mastermind behind
the Hellraiser flicks. He did a few Candyman films and recently
had a hand in the arthouse hit Gods and Monsters, but for the most part
this master of the macabre has kept a pretty low profile.

I suppose it was really only a mater of time before Pinhead’s daddy hopped
on the gaming badwagon. Thankfully, he decided against doing a game remake of
one of his movies, opting instead to throw together a brand new frightfest to
scare the Underoos off gaming geeks the world over.

The result is Undying, and while it’s chock full of disturbing moments,
not all of them are good.

You’re Patrick Galloway, expert in the supernatural. It seems that your close friend Jeremiah Covenant had been tinkering with the forces of evil and accidentally pushed the wrong button. Now, his estate is being haunted by an ancient horror, including the ghosts of his dead siblings. Your job? Clean up the mess!

The first thing you’ll notice about this first-person shooter is the impressive
visuals. Undying runs on a tweaked version of the Unreal
engine, and it’s really pretty. The crisp textures and gloomy atmosphere
lend a tangible sense of realism to the environments. The NPCs look fantastic,
with changing expressions and mouths that actually match the speech. Walk through
a puddle of blood and you’ll leave incriminating, bloody footprints. From the
lighting to the explosions, this is a beautiful game.

Like any fragfest, the weapons are essential. The choices range from the typical
pistol and shotgun to the wicked scythe and the ‘tibetan war cannon,’ which
shoots balls of ice. Though there are only 8 to choose from, they suffice.

Since you’re a paranormal expert, you also have at your disposal a bunch of
neat-o spells. The most useful is the Scrye, a sort of sight-beyond-sight that
lets you look into the past. This leads to some really freaky gameplay moments
– a seemingly empty courtyard is suddenly filled with the spirits of long dead
priests, who vanish when the spell wears off. Most other spells are offensive;
the skull storm in particular is great fun, allowing you to summon flaming skulls
out of the ground to fling at enemies.

Sadly, the enemies will pretty much always get hit, since they’re total morons.
They either beeline straight towards you or run about in some kind of badly
scripted pattern. It’s really not much better than Doom, and it makes
combat a little tiresome.

The somewhat paltry enemy types is also a letdown. For the first few hours
of gameplay, you’ll almost exclusively fight ‘howlers,’ or as I prefer to call
them, ‘monkeys.’ Really. It’s just wave after wave of monkeys. Didn’t know Mr.
Barker was such a Wizard of Oz fan.

Eventually you’ll fight other baddies, and as the game wears on things get creepier. The bosses are a little tougher and look pretty cool. Each can only be killed in a specific way, despite how many rounds you pump into ’em. 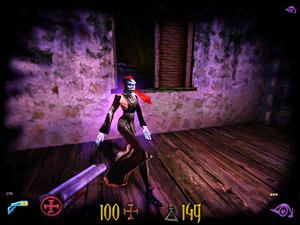 Aiding
the terror is some of the best sound I’ve heard in ages. The main theme is hauntingly
similar to the classic Carmina Burana.
The general voice acting is solid, particularly Jeremiah’s dead siblings, and
the ambient noises do wonders for the atmosphere. If the visuals don’t freak
you out, the audio will.

Indeed, this is a violent and scary (if sometimes a bit hokey) game. From
the fountains of blood to the plethora of otherworldly demons, there’s enough
horror here to please fans of the genre. But while it succeeds in its scare
tactics, it shows some wounds as a game.

Undying is incredibly linear. Much of the game takes place in Jeremiah’s
gorgeously rendered mansion, which is filled with tons of hallways and rooms.
However, doors magically lock and unlock to suit the design. One moment you’ll
be able to open a door to enter a random room, then five minutes later that
door will be locked or jammed because you’re ‘supposed’ to go somewhere else.
And no, you can’t blast open a door with your big ass shotgun.

This linearity worked in past games like Half-Life
and the more recent No One Lives Forever
mainly because it just made sense. You never really questioned why you couldn’t
go back the way you came. In Undying, there is simply no explanation
for constantly “stuck” or “jammed” doors, and it only serves to remind you that
you’re playing a game.

The outdoor levels painfully nail this home. You are unable to climb even the slightest incline if it’s off the beaten path. Again, this kind of strict rail only works if it makes sense. Not allowing me to take a few steps up that hill to get a better view of the landscape reeks of cheap level design.

For that matter, the design in general falls prey to cliché after cliché.
Hey look! There’s a health pack and some bullets in this deserted bathroom!
What luck! Hey! There’s another health pack and some shotgun shells sitting
atop that crate in the mausoleum! My stars must be in alignment, because
right when I needed another health pack, I found one! Folks, at one point I
had accumulated 37 health packs, each of which heals a quarter of my health.
Sort of takes the terror out of the game. And speaking of terror…

You better get used to seeing a loading screen, because Undying‘s got
a ton of ’em. It seems that the game can only handle a few rooms/areas at a
time. You’ll open a door and see freaky blackness beyond. Thinking you’re in
for a fright, you’ll cast your Scrye and slowly enter…only to get a big fat
LOADING. Then you suddenly reappear in a well-lit room with no enemies in sight.
Ack.

Undying is also strictly single-player. In this day and age, it’s a
little tough to swallow a first-person shooter that doesn’t come with multiplayer.
The shelf life is cut short.

There is some genuine fun to be found in Undying, but in the grand
scheme of first-person shooters it’s a bit too formulaic. It might do a great
job at raising the hair on the back of our necks, but it doesn’t do much to
raise the gameplay bar. Who knew mediocrity could be so scary?