The Evolution will not be televised. Review

The Evolution will not be televised.

It was somewhere in the mid-nineties that Japan introduced us to a little gizmo
called a Tamagotchi. America quickly fell in love with these little electronic
“pets.” Fights broke out in malls; kids were humiliated if they made the wrong
choice of orange or blue. Teachers had drawers stuffed with confiscated dogs,
cats and monsters, and the national GPA dropped a full grade level as the students
were obsessed with raising virtual pets from a pixilated egg on through a natural
digital death. As time moved along, more and more toys had the ability to learn
and grow, becoming more of a friend than a toy. The death of Furby was glossed
right over with the birth of Pokemon, and the trend continues…

Playing Evolva is sort of like raising a team of Tamagotchi, with a
bit of a malevolent twist. Your pets don’t just grow – they destroy.

The overall premise of Evolva is as if Raziel had joined Greenpeace;
you must save a planet from a humongous parasite that attaches itself to the
surface and proceeds to suck the life out of it. The parasite has a nasty habit
of spawning guardians, hostile creatures with more bite than bark. The guardians’
sole purpose is to protect the parasite by any means necessary; namely, slay
any and all life forms on the planet until all energy sources are exhausted,
and move on to the next unsuspecting planet.

The irony of your mission is that in order to save the planet, you must also
slaughter some of the indigenous creatures in order to absorb their DNA. As
you do so, you are able to mutate your 4 special units (Genohunters) and help
them adapt to the natural surroundings. Now, the more adept you are the better,
right? So stomp as many of the poor little creatures as you can in the name
of saving them. On the plus side, slain guardians “contribute” their DNA to
your cause, allowing you to utilize the brute firepower that they bear.

To add to the drama, you aren’t even fighting these battles yourself. You
play as an “Evolva,” one of an elite group that can control the Genohunters while sitting in the plush cockpit of your orbiting spaceship,
sipping dry martinis and laughing as you direct the Genohunters, like a king barking orders to some pitiful serfs who must do your every bidding.

Controlling the
Genohunters is intuitive. Set in a third-person perspective, Evolva plays
like a first-person shooter. The interface is nicely streamlined, which is particularly
noticeable in the different camera views of the Genohunters not under your current
control.

The unique vision is more than entertaining. With varied missions and the ability
to deploy the Genohunters independently or as a group, the opportunity for serious
tactics is strong. Evolving your team can also be a thought provoking process;
each indigenous creature you mercilessly butcher gives a new physical trait,
like jumping higher or running faster. Hostile guardians expel weapon genes,
allowing you to develop your genetic arsenal by adopting traits like huge, sharp
claws and breathing fire. Since you can mutate your Genohunters often, you can
really steer the evolution of each member to benefit the team, and endless outcomes
are possible.

The graphics are superb, drawing you into the worlds that you must save. The
textures of the landscape are very sci-fi with green and blue swirls and waving
trees. The creatures are incredibly creative, from the docile frog-like habitants
to the awesome parasite itself. You half expect Rod Serling to step out at any
minute and explain that you have just crossed into the Twilight Zone.

The gameplay itself is pretty cut and dry. You spend most of your time completing
various mission objectives, almost all of which include killing as many guardians
as you can. Until you develop the more interesting weapons, the game plays like
a punch-fest – just run up to things and whack ’em.While the different evolutions
lead to varied gameplay, the whole thing gets a bit repetitive.

The biggest problem I encountered was compatibility with my system. I was
on the phone with tech support more than once trying to fix one problem or another.
The end result was that the game still crashes every twenty minutes or so, so
I save often.

Despite this, I definitely recommend Evolva. The cheesy 80’s Sci-Fi
cover (in “action 3D,” no less) says nothing about the game other than “create
your own genetic warriors.” However, beyond the mutation there is a fun game
based in solid game play and backed by an interesting plot and set in a beautiful,
creative world. A refreshing break from the endless lists of clones that plague
gaming today. 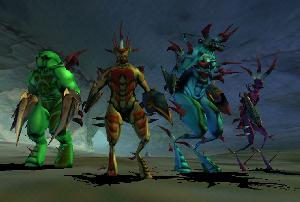 It’s been a long time coming, but Season 2 of Alice in Borderland is finally about to arrive on Netflix.…
TV 2 months ago