“Happiness, is a warm gun…” Review

“Happiness, is a warm gun…”

If only our dear departed Mr. Lennon knew just how right he was. Just one
thing: shoot it very, very quietly. You don’t want to alert the others to their
imminent peril.

Rainbow
Six is a game that all of us, I suppose, have been waiting for. A game that
seems so idiomatic, so obvious, that it is almost puzzling that it took so long
to get here. A game of realistic, commando style combat.

You control the elite, ultra secret, multilateral, anti-terrorist unit, Rainbow
Six. It is a force composed of the best, most skilled anti-terrorist operatives
of all the nations who participate and receive its protection.

You are assigned a mission. You read all the intel. You assemble your strike
team out of the pool of operatives. You give them weapons, items and armor.
You break down your operatives into teams (max 8 operatives, up to 4 teams).
You assign each team objectives and waypoints on a map of your mission. Finally
you jump into one of the team leaders’ bodies and play the most intense first
person action strategy game ever created.

You see, much like real life, in this game one shot is very, very lethal. (Take
heed, Quake junkies!) Even if you are wearing the heaviest body armor, you wont
survive one shot to the head or more than 2 to any other area, especially if
your enemy is using a heavy machine gun like an M-16 or a CAR-16. To add to
the peril, if one of your operatives dies, they are gone for the duration of
the game and you may have to use inferior reserve operatives.

This makes you truly fear for your safety. Sweat beads and tension builds as
you turn each corner. Restrict your urge to constantly hold down the trigger
in the pathetic hope that by the time you see your opponent he will already
be dead. More likely you will jump like a startled rabbit when you fail to see,
aim at, or eliminate your terrorist enemy, and he puts a bullet through your
soft, fleshy, and mortally frail body.

The game plays much like other first-person action games. You control you operative
either with the keyboard or a combination of mouse and keyboard as in Quake
2 or Jedi Knight. The main difference is that while
you only occupy one operative at a time (you may switch between teams and team
members) you still have control over the other teams.

In the planning stage you can give the others a waypointed battle plan with
4 go points at which they will wait until you tell them to proceed. It is absolutely
essential that you plan your strategy well. Very often stealth is required.
If hostages are present, then the terrorists must be taken out quickly and quietly
so that the other guarding the hostages don’t get freaked and splatter their
hostages’ mental muttons.

The weapons and equipment in the game are all real world and quite authentic.
They include such powerhouses as the M-16 or CAR-15, lightweight silent killers
like the HK MP5SD5 and HK MP5-A2, side-arms like the old dependable 9MM Barrette
92F, and the usual assortment of flashbangs, frag grenades, lockpics, and other
tasty toys. Each operative is assigned a primary weapon, a secondary sidearm,
and then there are 2 equipment slots that may be filled with either tools, grenades,
flashbangs, or extra ammo. 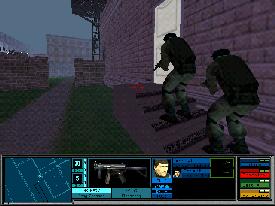 Using D3D,
the graphics are also roughly equivalent to Quake 2
or Jedi Knight. The texture maps are good and lend a
feel of authenticity to the game, as does the modeling of the environments.
There are some nice colored lighting effects to make you go gaga over, although
they only effect the environment, not the characters. The units in the game
are molded well, if a little bit angular. However, the character animation present
in this game is second to none, the human commandos in the game move, shoot,
and breathe so convincingly that you’d swear they are moving, shooting, breathing,
and for the moment, living humans.

The multiplayer is incredible. Just try to imagine a LAN party in which you
break up into teams of 4, plan your strategy carefully, select your equipment,
meticulously plan out how you will provide cover for each other, and finally
get into the game and get your ass kicked by the team who thought a little smarter
than you. This game really shines over a network but, alas, as you can probably
guess, the netgames aren’t quite as spectacular when you are playing with blokes
10,000 miles away from you.

First, grenades do not do enough damage to the environments. That’s pretty
straightforward.

Second, the AI has some problems. Think of a corner: there are your boys and
girls running towards it about to make the turn, there is a terrorist around
the corner with an AK-47 who mows them down in succession as each one blindly
runs into his line of fire. It makes you wish that your AI squadmates would
have enough sense to deal with this problem intelligently after the first one
was whacked. Also, it forces you to go back to the planning phase and even more
closely tune the paths of your naive squadmates. While it is nice to have such
precise control over the others in your battle scarred team, it would certainty
add to the authenticity of this game if they weren’t so damn stupid.

This is simply one of the coolest games ever to grace a monitor screen. The
action is intense, the feel is authentic, and the multiplayer is great. Hell,
I’ve already told you this, so just get out there and strike a blow for god,
country, and the love of shooting human beings with hollow-point ammo.

It's finally falling this May.
News 5 days ago

Do you wanna build a snowman?
News 5 days ago