Alice was finally beginning to feel much more at ease in this strange looking-glass
world. As she strode up the path, her step acquired a jauntier, livelier bounce.
When far ahead two figures poured into distant view.

As she approached, Alice could not quite make them out.

“My, they are very roundish sorts of figures, like Humpty Dumpty, only moreso.”
Alice thought. Suddenly, the round thing on the left leapt upon the right one
and seemed to be trying to unscrew the other’s head.

By
this action, it became clear that she had come upon her acquaintances Tweedledee
and Tweedledum once again. As she neared them, they spotted her and immediately
untangled their small battle and began furiously straightening each other’s
clothes and hair. More presentable, they waited, standing at ragged attention.

Alice knew from prior experience that they were not much for courtesy, no
matter how hard they tried, but she would certainly not let that spoil her manners.
She stopped and curtseyed low.

“Good morrow to you, fine sirs.” she said.

“Hello! Hello!” they cried, abandoning their momentary stillness and running
around with excited abandon.

“We’ve been looking for you!” Tweedledee exclaimed.

“No we haven’t!” argued Tweedledum.

“But we have found her,” explained Tweedledee, “so we must have been looking
for her.”

Unable to argue with his twin’s flawless logic, Tweedledum merely nodded enthusiastically.
Then, suddenly, as a thought struck him, “Let’s play a game!” he burbled.

“I quite like games.” responded Alice. “I often play with my sisters at Jacks
or Trapple or Bonker Jerks.”

“A game of me?” asked Alice. “Whatever does that mean? I imagine I
should be quite good at it.”

“Watch watch watch!” said Tweedledum as he ran off to the side of the road
and began gathering objects from a large bag that Alice had not noticed before.
Tweedledee, on the other hand, was so excited that he could only run in circles
shouting “Wooooooooooooo!”

“Aha!” cried Tweedledum, brandishing a sloshing bucket of red paint. “The
Queen of Hearts never even noticed I took it.” With that, he reached his hand
into the bucket and started throwing paint on everything – the road, the bushes,
the rocks. Tweedledee got a big handful right in the face and it dripped down
him, leaving a circle of red footprints as he continued to run. Some of the
paint splashed on the hem of Alice’s dress.

“What are you doing?” she asked, backing away so as not to get any more paint
on her dress. She was sure it would be difficult to clean. 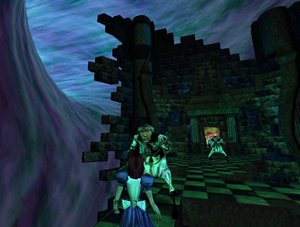 “I don’t know
about that.” replied Alice. “Seems to me that this looking glass world was wonderfully
strange to begin with. You haven’t done that much to make it stranger, although
I do admit that things do look a lot creepier.” It reminded her of a very odd
haunted house indeed.

“Time to start!” the two exclaimed in unison. “Follow us!"

And they began to waddle furiously down the road.

“Is that a giant tongue on that building?” asked Alice. “Eeeeeewwww!”

“To play properly, you must play pretend.” lectured Tweedledee. “Instead of
being a little girl, you must be a surly teenager. Try to be disturbed and full
of angst, if you can manage it.”

“What? You mean like my sister Edith? She sneaked out one night last week
to meet her friends at the graveyard. I didn’t tell.”

Alice tried to think like her sister, and found that she could. She gawked
at the sights around her as she followed the roly-poly brothers. She saw buildings
that dissolved into vortices, plenty more big pink squirming tongues, enormous
clockworks, giant chess pieces, disgusting looking emaciated children with nails
in their heads. Everywhere she looked, the scenery was quite astonishing, if
a little gross. “It really is most impressive…if you enjoy that sort of thing.”
said Alice.

“Exactly! Here, take this kitchen knife.” (Since Alice had been staring at
the world around her, she was not sure which one had handed her the knife.)

“Oh my, whatever is this for?” she asked.

“And hacking and throwing and stabbing! Snicker-snack!” piped in Tweedledee,
obviously excited by the prospect.

“Ahem, yes,” said Tweedledum, “and later you’ll get more weapons for shooting
and bashing and rending and maiming. What else would you do with enemies?”

“This sounds more like a game for boys…” ventured Alice.

“Are you saying we aren’t boys?” demanded Tweedledum, looking quite miffed.
“What are we then? Fish?”

“Yeah.” added Tweedledee, turning to face her. “If we’re fish, then we must
all be underwater, which would make you a fish too. So there!” 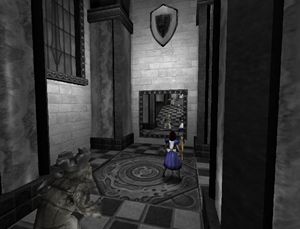 “Oh my no! I
didn’t mean anything of the sort.” Alice quickly looked for a way to change
the subject. “Goodness, look at that interesting thing over there. I wonder
what it is.”

And she began to walk away from the path towards it.

“Stop!” the brothers shouted, “No going off the path. You can only move
along the path.”

“But what if something else looks interesting?”

“Well, that’s too bad,” explained Tweedledum, “because it’s not in the rules.
You can’t have a game without rules. Path only. Things must be done in
their proper order.”

“What sort of things?” asked Alice.

“And jumping!” Tweedledee threw in, “I love jumping.”

“Jump!” cried Tweedledum, and the pair of them began jumping up and down madly.
“Jump!” he told Alice, who found she could jump much better than either one
of them.

“Isn’t this rather a lot of jumping?” asked Alice.

“You can never have too much jumping!” explained Tweedledee, jumping on an
oversized daisy as if it were a trampoline.

Alice was just about to argue that, in fact, you certainly could have too
much jumping, and that this was perhaps the time to consider it, and that even
‘blasting enemies’ or ‘pulling levers’ sounded preferable to her at this point,
when a grin materialized on the road in front of them. 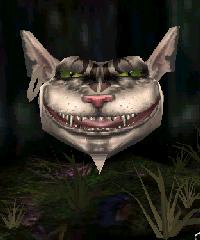 Used
to this sort of behavior by now, Alice curtseyed low and said, “Good morrow
to you, cat,” even before the beast had finished fading in to sight. “Oh my,
you’ve gotten quite skinny since I last saw you. Is that a new earring?”

Tweedledum hit the cat squarely with a big glob of red paint.

The cat looked at the three of them rather disdainfully and replied in a sinister
baritone, “Ah, dear Alice. Didn’t you know that a book can have a cover, but
still might be missing some pages?”

Alice was trying to think of a response to this that sounded better than “What?”
or perhaps “Huh?”, so she said instead, “You look quite good, though. At least
my sister would think so. You fit right in with these new surroundings. Very
maliverous.” Alice was pretty sure that was a word.

The cat was about to respond when Tweedledum interjected, “In our game, you’ll
meet many of your old friends. However, you may find them rather changed. You
may even have to kill some of them.”

“Oh dear.” worried Alice. “I hope it doesn’t have to come to that. It seems
to me that there didn’t have to be quite so much killing in this game. I’m not
certain my friends will enjoy that.”

“Stuff and twaddle.” said Tweedledum. “That hardly matters. Your friends cannot
play with you; this is a game for you alone. So what do you think?”

Alice thought very carefully, as her teacher had instructed, before she replied.
“I rather like it, I must say. Although, my sister Edith may have liked it more.
‘Tis a pity she is not me. I especially love the new scenery, your bucket of
paint…”

Tweedledum glared at her.

“…I mean blood, worked much better than I would have guessed. I would have
liked a bit more story to the game, and a bit less of killing things, and quite
a lot less jumping, thank you.”

Alice continued, “But what I would really like is to leave this path, and see
what that interesting thing is over there. I wonder what happens if I jump on
this big red button marked ‘The End’?"

Bigger and best.
Tech 7 days ago

There's a lot to digest.
Originals 1 week ago
10