Everybody in the pool! Review

Everybody in the pool!

Ahh,
if only that were the case with Chef’s Luv Shack. Chef’s original plan
was to use his gameshow idea to give young, vivacious, uninhibited swimsuit models
a taste of his salty chocolate balls. Due to unforseen circumstances, no swimsuit
models were available, so he had to make do with Stan, Kyle, Kenny, and (the reason
the show is so popular) Cartman. Pity for Acclaim that they didn’t get those models,
because those crass-talkin’ kids just aren’t enough to make this gameshow a hit.

Since the animation in South Park is crude, you just can’t expect much out
of the graphics for Chef’s Luv Shack. However, I expected a little more
than I got. While the mini-games are well done, the main gameshow leaves a lot
to be desired visually. Basically, it looks like a South Park episode, except
that all the characters have a total of about 5 animations. The PC version is
even worse than the others. Whenever Chef tilts his head to the side, it becomes
very pixeled and badly drawn. How can you make animation worse than South Park?

Thankfully, the sound is great. From Isaac Hayes’ smooth-as-silk voice to
the high pitched whining of Cartman, it’s all here. They even threw in the occasional
beeped-out tirade. There are a good number of guest appearances from other South
Park favorites as well. The game even opens with a quick rendition of “Simultaneous
Lovin" by Chef himself. Ooh, baby.

The gameplay is split into two parts: the gameshow and the mini-games. The
gameshow aspect is your basic trivia game. Playable with up to four people,
you have to ring in before anyone else and answer the question correctly. The
questions are categorized in much the same way as they are on Win Ben Stein’s
Money. With humorous categories but fairly serious trivia questions, Chef’s
Luv Shack is a bit reminiscent of You
Don’t Know Jack (the paradigm of PC trivia games).

Unfortunately, that’s the only similarity between Chef’s Luv Shack
and YDKJ. Where YDKJ had 800 questions in its original incarnation,
Chef’s Luv Shack has significantly fewer. You can only play through the
game about two or three times before questions that you’ve seen before return
like the plague. The obvious lack of questions really hampers this game’s replayability.

Where the gameshow fails, the mini-games shine. There are a TON of mini-games
in Chef’s Luv Shack. In between every round of questions, all the players
play a mini-game to earn more points. On top of that, random single player mini-games
will pop-up in the middle of question rounds. From tame pie-eating contests
to the aptly named “Spank the Monkey with Mr. Mackey”, to giving Cartman an
anal probe, the mini-games are pure South Park. They even mimicked some classics
(such as Championship Sprint, Asteroids, Donkey Kong, and Warlords), making
the mini-games easily the best part of Chef’s Luv Shack. M’kay? 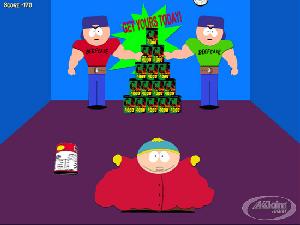 If you’re playing with a friend and are beating them handily, the game starts
giving your opponent mini-games that you can’t play in order to help them catch
up. While a close score is a good thing in most cases, excluding a player from
the game just to even the score is a lame tactic. You know, I could beat Kasparov
at chess if he just didn’t move for a couple of turns. Sheesh!

While the load time on the PC is better than the Dreamcast version, the PC
version has some major bugs that should have been eliminated. For example, while
the manual tells you the correct controls, the game itself will tell you incorrect
ones. Think that "Insert" is your buzz-in key? Think again.

On the two computers this game was tested on, there were graphical and programming
errors. On one, the top of the screen kept flickering. On the other, the entire
ending was always skipped. While it may work perfectly on some computers, it
might have some major problems on others. Can anyone say, "Rushed to Market?"
Good, I knew you could.

When Chef’s Luv Shack was first announced, I was expecting something
along the lines of Austin
Power’s Operation Trivia (ie. with trivia based on the show). Thankfully,
they tried to use actual trivia, although not enough questions. The mini-games
are great, but since you can’t choose which one you want to play, you often
play the same ones over and over. Chef’s Luv Shack is a decent attempt
with some cool elements, but the game just doesn’t have enough depth. When push
comes to shove, Chef just doesn’t make a very good gameshow host . . . maybe
they should look into hiring Regis Philbin. 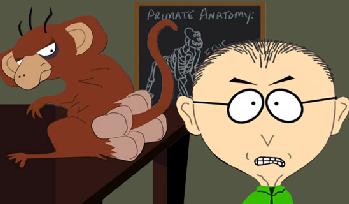 Do you agree with the list?
Originals 1 month ago
9

It’s been a long time coming, but Season 2 of Alice in Borderland is finally about to arrive on Netflix.…
TV 2 months ago
8