Marilyn Manson comes to mind. His sad, sorry face occurs to me every time I see
the rendered visage of Baal, the primeval protagonist of this little piece of
work, the Diablo 2 Expansion Set. Perhaps the connection is even more substantive
than aesthetic. After all, what is Manson if not a faking, morbid, unoriginal
bastard marketed by the record companies for the sole purpose of making money?
And then what is Diablo 2 if not an unoriginal follow-up
to a megahit that not only was destined to become one of the most successful games
in history, but one that, at it’s heart, is about nothing else than greed and
killing?

Personal issues with capitalism aside, Diablo 2 Expansion Set: Lord of Destruction,
is rather good. Scratch that, it is very good. But I should clarify that
it is a very, very good expansion to a merely decent game. Lord of Destruction
accomplishes something impressive – it gives players a reason to go back to
Diablo 2, even if they’ve already beaten it several times.

Lord of Destruction is based on the game expansion theory which states
that in expanding a game, you don’t just add more to it, but you enrich what
existed before. While there is a new act added to Diablo 2, of greater
importance are the two new character classes and host of additions and improvements
to the existing game.

Players may now assume the mantle of the Druid or Assassin. The Druid can
call upon or become certain animals, while the Assassin makes use of fast attacks,
traps, and martial arts to great effect. Neither of the characters play quite
like any of the older ones, and both make for some very satisfying play, even
if one of the Assassin’s skills is way, way too useful.

But all types of characters can make use of the many new improvements. Most
of these revolve around socketed objects. In Diablo 2, socketed items
may have items inserted into them to add attributes. Only gems were available
to insert, and they mostly just added elemental damages. Lord of Destruction
adds Runes and Jewels.

Jewels are more unique and add a greater variety of effects, but the Runes
are more interesting. There are about 25 types, each of which has a monosyllabic
name. If you insert Runes in the proper order into the proper item with the
proper number of sockets, you create a “Runeword” object with some really impressive
abilities.

Hirable NPC companions now play a greater role. They can be outfitted with
weapons and armor, be resurrected when they die and they can accompany you through
the entire game.

Beyond these improvements are other more subtle changes, such as the addition
of Ethereal (non-reparable) items, a much larger personal stash and a huge number
of new kinds of items, many for the new character classes and final Act.

Speaking of which, the new Act steals the entire Diablo 2 show. Diablo
is dead, but one of his brothers, Baal, Lord or Destruction, is trying to cause
some major badness, unleash hell, etc. You go to kill him now. Set in the “Barbarian
Highlands” this snowy stage makes for some of the best gameplay ever to grace
the Diablo franchise. 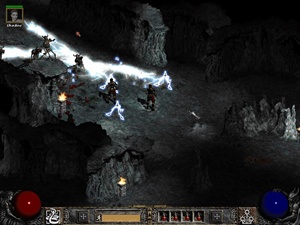 After
the mostly non-interactive and chaotic Acts preceding, it is a great joy to
storm military embattlements, burn catapults and kick down doors. Your base
of operations is a city under siege and much of the action puts you on the front
lines of a military campaign. The sense of immersion is greatly increased. It
is a nice feeling, for example, to come across a Barbarian warrior, fighting
to save his city, protect him from harm and use him like a football blocker
to carve a path.

The aesthetics of the new scenario deserve mention. While the expansion pack
finally includes the option to view the graphics in 800×600, the new Act takes
better advantage of it thanks to some really lush rendering.

The music, however, should get the most honorable mention. In a time when really
good game scores are extremely rare, the score for the Barbarian Highlands is
an evocative mixture of at least a dozen of my favorite film scores, from Conan
the Barbarian to Star Trek: First Contact to the Princess Bride
and far, far more. After the stale, repetitive tunes of Diablo 2‘s four
Acts, the audio in Act V really lets you know you’re in for something a little
more special.

In order to get to Act V you have to complete the game, as the way only opens
after you slay Diablo (in a ham-fisted segue to boot). I vowed never to play
Diablo 2 again after the great chore it was to review a year ago. It
is a testament to the quality of this expansion that while playing again a game
I had sworn off, I had a far better time of it than I did in those grueling
four days last summer (6 days this time around).

All is not completely rosy, though. Runeword objects are not totally functional,
only working in multiplayer. One patch has already been released but it appears
at least one more is one the way. While it is safe to say that the issues with
Lord of Destruction are temporary and therefore will be negated by the
staying power this expansion is sure to have, the curse of incomplete software
makes another lamentable appearance.

Still, Lord of Destruction is a great example of what an expansion
pack can be. Not only does it add length, but it improves the quality of the
entire experience. If not for the bugs and the hefty $40 price tag, I would
wager that a better expansion to a game will not be seen for some time. If you
like Diablo 2 and have any interest in spending some more quality time
with it, or if you just love to augment your capitol worth with plenty more
new virtual loot, you cant go wrong with Lord of Destruction. 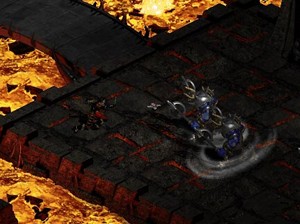