Every once in a while, a game comes along that was exactly what I was waiting
for, even though I had no idea I was waiting for it. Kohan is just such
a game. Technically a real time strategy game, Kohan replaces a number
of the more frenetic norms of that genre with more elegant, refined gameplay.
Consequently, it is a game that will appeal to almost any category of strategy
gamer, whether they prefer turn-based or real-time, military or fantasy.

The real beauty of Kohan is that it manages to be a complex and engrossing
real-time strategy game without being a hyperactive clickfest. RTS developers
are often excited about how many individual units you can have on the screen
for their game. According to that line of thinking, more is better and a whole
lot is best. That’s certainly true if you’re Akira Kurosawa and are filming
a samurai epic, but the whole point of a strategy game is to challenge you to
think about and plan complex solutions to problems. This is hard to do when
gameplay is something to the effect of, “Click on all the archers…wait, not
those three archers…oh shoot, I got the pikemen too…wait, where’d
my cavalry go…oh, they died while I was trying to click on the archers.”

Kohan solves this problem by using a company model where your individual
units on the screen represent whole companies of units going off to battle.
Companies are composed of a main unit (which will fill four of the six “slots”
in the company), two support units and a leader. Consequently, a company will
be represented on the screen by 7 icons, rather than the 300 units that they
represent.

Combat is handled (very effectively) by the AI. If your company’s zone of control crosses another company’s, they fight, each unit acting according to its scripted AI. This means that victory is not determined by who can click on and command their units the quickest. Instead, the challenge lies in designing company combinations that can deal with certain units or situations with the highest efficiency.

This is quite a lot of fun, and the diversity of units available mean that there are several different possible combinations that might be equally effective if they are employed with appropriate strategies. In addition, the complexity of the scenarios and the elegance of the game balance ensures that you will not be able to create a single í¼ber-unit that will be usable in all circumstances. You will be constantly changing and refining your companies throughout the game’s lengthy campaigns.

The campaigns themselves reflect the thought and polish that pervade the game.
The short version of the backstory is that you are part of an immortal race
(the Kohan) that has lain dormant for centuries. Now that you are being revived,
you are leading armies to reclaim your world from the “shadow.” As you move
through the game, you will acquire new Kohan who can fill the leader slots in
your companies. The Kohan gain experience (as do your units), and higher level
Kohan can add considerable bonuses to veteran companies. Like the heroes in
Heroes Of Might & Magic, Kohan
move forward with you through the scenarios in a specific campaign. This additional
role-playing element is a nice touch, and adds depth to the game’s storyline. 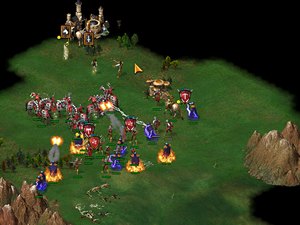 Another nice touch
is the resource model, where buildings and units draw resources on a per-minute
basis from your production. Since there are only four resources, and they are
dynamically offset by your treasury (you will automatically buy more of a specific
resource if you are not producing enough of it), resource management is not
a headache and requires only a small amount of attention to keep balanced. The
cities themselves have unique upgrade trees that essentially force you to choose
between producing more resources or more gold, as well as narrow down the types
of advanced units you wish to create.

The graphics for those units, like the graphics throughout the game, are very
nice. Kohan only plays at 1024×768, and the terrain, cities, and units
look appropriately appealing and detailed. Combat units have over 400 frames
of animation with multiple attack visuals to break up the monotony. I spent
several more hours than I should have playing this game, and I never got tired
of looking at it.

I also never ran out of things that impressed me. Another well-implemented
feature in Kohan is the real-world military concept of zones-of-supply
and zones-of-control. Every unit has a zone of control. Enemies outside that
ZOC will not be engaged. Likewise, every city or outpost has a zone of supply.
Units outside that ZOS will not be able to heal damage or replaced fallen troops.
This simply makes sense from a real-world perspective, and forces you to expand
your empire at a reasonable pace.

On the surface, keeping up with the various zones (there are also guard and
population ones) would seem like a daunting task. Fortunately, the interface
in Kohan is simply flawless. If you take advantage of the outstanding
tutorials that come with the game (which hopefully will set a new standard in
the industry) you will have no trouble navigating the many options available
to you as the new Kohan leader. The layout of the robust scenario editor is
equally intuitive, and even the most casual designer should have no trouble
creating new maps if they desire.

It’s really hard to find something to dislike in this game. In fact, my only complaint is that the pacing sometimes feels a little unbalanced. Often times I would play with my fingers resting on the “speed game up” and “slow game down” buttons. Additionally, players used to creating huge armies and simply plowing over their enemies may be disappointed to find that the structure and balance of the game will force them to actually use strategy rather than brute force. Imagine that.

Despite those minor exceptions, Kohan is a real gem. It offers carefully
balanced, elegant gameplay that will challenge your brain rather than your double-click
speed. In addition, the large campaign, outstanding editor and random scenario
generator (the absence of which will cost most games a letter grade with me)
provide tremendous value for your gaming dollar. If you are any kind of strategy
gamer, I cannot think of a single reason why you would not want a copy of this
title. 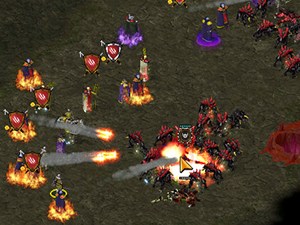