Since the time of its release, Myth has
kept up as one of the most advanced and innovative real-time strategy games
on the market, wielding some of the most impressive graphical effects that the
strategy genre has ever seen. Now, about a year later, Bungie has returned
with Myth II: Soulblighter, a game that is both one of the best sequels
to hit the scene and one of the finest titles on the RTS market. This, my fellow
gamers, is what sequels are all about.

Sixty years have
passed since the first Great War against the Fallen (the original Myth),
and the people have returned once again to peace and tranquility. After responding
to complaints of grave robbing in a small town called Willow Creek, you must
lead another struggle against the Fallen, who are now led by Soulblighter, the last
of the Fallen Lords. Like the original, each mission is preceded by a diary-style
monologue that reveals the plot up to that point, as well as a brief cartoon
about every four missions.

Myth II does an excellent job of varying all 25 of the missions and
their settings. There is a huge variety of backdrops, from the open daytime
of a castle to the stormy bow of a ship to the dark depths of a haunted dungeon.
Like the original, environment has a huge affect on the game. For example, rain
and snow will extinguish a dwarf’s explosives, and upper ground gives a huge
advantage over those below. In the end, Myth II offers some of the
most creative and immersive environments in the industry.

Bungie made a few important adjustments when designing the control system in
the sequel, but kept the overall idea the same. As a result, fans of the
original Myth should feel extremely at ease with the controls in Myth II.
While the keyboard can still be used to move, rotate and zoom the camera, players
can now perform these tasks using only the mouse as well. A helpful control bar
at the bottom provides easy access to “commonly used features,” the most important
being troop formations. Movement orders can now be given at both the overhead map
and the main battlefield. And lastly, the two most important changes since the original are
the use of the keyboard arrows to rotate characters (replacing the damn gesture
click) and the availability of clear mission objectives at any time during a
mission. 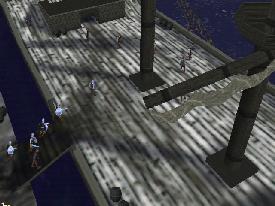 Simply put, Bungie
did an excellent job at reading the faults of the original by making change
where change was needed and leaving the successful areas alone.

Like the controls, Bungie made a few tweaks to the game’s awesome 3D engine.
There are more polygons and more frames
of animation, an impressive feat given the low minimum system requirements.
The excellent landscape design, smooth and detailed texture maps and sweet
terrain effects are all still there, but with greater variation. The terrain
has many more highs and lows, meaning deeper canyons and higher plateaus.
In addition, improved water, shadow, and particle-based fire effects all help lead to the overall sense
of awe that you experience when playing the game.

Probably the most aggravating aspect that plagued the original Myth
was the nearly inexcusable lack of unit intelligence. Dwarves were
quick to throw explosives into a crowd of their own allies and archers would shoot
warriors in the back. Most of these annoyances have
been addressed in the sequel and, as a result, the game is much easier and more
enjoyable.

One of the most stressed aspects of the original Myth was extensive
multiplayer support, and the sequel is no exception. Bungie’s Myth network,
Bungie.net, offers unlimited free Myth and Myth II network play
with a nice, user-friendly interface. Like Myth, there are a huge number
of different multiplayer modes.

In the end, whether playing single player or multiplayer, Myth II
offers the best real-time strategy experience in the industry. It has everything
that made Myth one of the best games of last year, plus a free set of
steak knives. Like Star Control 2 and Godfather II, Myth
II is simply one of the best sequels ever designed.

XLR is the new USB?
Tech 1 month ago

Here are all of the bug fixes and new additions.
News 1 month ago
7