You gotta hand it to Interplay, 14 Degrees East and Taldren – in many ways, the
Starfleet Command experience gets the Star Trek brand of naval starship
combat down cold. You may well wonder what the hell the phrase ‘naval starship
combat’ means; basically, it means giving starships the kinetic respect they deserve.
These aren’t zippy little T.I.E. Fighters whining around with the skeletal nimbleness
of gnats on crank; these are hulking, lumbering, big-ass capital starships that
turn like cows on a cold morning.

Starfleet Command II, like its predecessor Starfleet
Command, is a computer translation of the massively complicated 80s hex-board
wargame Star Fleet Battles. At the time of this writing, it’s still the
only way to go for Trek-flavored ship combat despite its problems…which are
considerable.

For you pointy-eared, tricorder-carrying geeks who know the drill, the Organians
have returned from Roddenberry-knows-where, bringing their special brand of
enforced galactic peace in the form of the Interstellar Concordium (ISC), a
new race charged with promoting amity throughout the galaxy by beating any and
all potential combatants into submission. Can’t we all just get along? Also
new to SFC2 is the Mirak “Don’t Call Us Kzintis” Star League, brought
in to counterbalance the Lyrans (hard-core SFB fans, don’t get too happy
– we’re two games into the franchise now, and there still aren’t any playable
Tholians, an unforgiveable crime).

The threatening reappearance of the less-kind, less-gentle Organians and their
extragalactic ISC muscle has thrown the galaxy into a state of total military
chaos, conveniently like that occasioned by the General War in the first game.
Only this time, the constantly-evolving online campaign universe promises to
give the player a real sense of scheme and purpose. At least, that was the plan.
We’ll chew that turd in a few paragraphs, so we will.

Players take real-time, follow-cam control of individual starships in isolated
tactical engagements or through the (very) loosely linked missions of sprawling
campaign games. Visually, SFC2 is a stunner. Deep-space battles take
place on a vast, scaleable, scrolling Einstenian space-grid with flaring nebulae,
tumbling asteroids and screen-filling planets as dramatic backdrops. Explosions
are among the most gratifying to be currently found in computer gaming. We’re
talking spectacular fusion fireballs and expanding rings of debris. Chunks of
superstructure everywhere. You can almost see the little flying bodies,
but of course in space no one can hear them scream. Maybe next sequel.

True to the game’s Star Fleet Battles roots, SFC2 gives players
almost intimidatingly detailed control of every last system and subsystem on
board their ships. If you’ve seen it on the TV show or the movies, you can probably
use it: Traditional weapons like phaser-beam bursts, photon torpedoes and disruptor
salvos make up the bulk of the shots that are exchanged. There are also exotic
alien weapons systems, like the Lyran Expanding Sphere Generator (which throws
a shell of dangerous, crackling energy around the generating ship, damaging
any object which comes too near), the vicious Hydran fusion beams (which can
absolutely lacerate a ship at short range), and ‘gatling’ beam weapons which
rapidly whiffle off numerous low-intensity beams (very handy for point-defense
anti-missile purposes).

Ships are composed of more than just guns, however, and a plethora of subsystems
encourages armchair starship captains to Kirk-worthy levels of resourcefulness.
You can jam a superior starship’s targeting computers with electronic countermeasures
(or jam the jamming with counter-countermeasures!), catch and hold off incoming
guided missiles with tractor beams (rather like a long-armed bully keeping a
rabid smaller kid at bay by grabbing his face) or even dump nuclear space mines
directly in the face of a hotly-pursuing ship. Feeling desperate? Then pack
shuttlecraft with antimatter suicide bombs, jerry-rig scientific probes with
impromptu warheads, or even push offending vessels into minefields, asteroids
or black holes, if you’re in that kind of mood.

SFC2 is engineered to bring out the crotch-kicking, eye-gouging dirty-fighter in PC gamers. Done properly, a starship duel turns into a kind of high-tech sailing-ship war, the players methodically maneuvering vessels for long, raking broadsides, devastating, all-guns-forward alpha strikes or repeated bouts of irritating, long-range sniper fire. If you were really into the old hex-board game and want the closest approximation to the experience (in which a single turn could last hours if shots were fired), you can crank the game-speed way down until it approaches a turn-based crawl. Aren’t you glad you paid through the loaf-pincher for a high-end gaming machine? 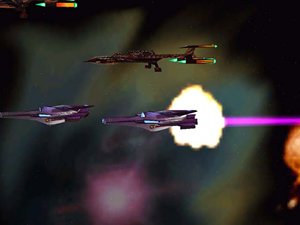 As
ships take damage, available energy for movement and weapons dwindles and the
situation gets desperate indeed – two crippled ships, s-l-o-w-l-y circling each
other like punch-drunk brawlers, each keeping the tattered remnants of their
shields toward each other, each looking for that final cheap opening where one
finger boink in the eye can be the straw that cracked the camel’s antimatter
core. Tactically, it’s brilliant…tactically.

On the strategic level, alas, it’s the same hastily-assembled crap we saw
in the first SFC. The campaign structure simply falls apart. Theorectially,
you’re a budding young officer of one of the various races, starting off with
a lowly patrol ship and working your way up to greater prestige and bigger,
tougher ships through contiguous missions as you patrol a constantly-evolving
game universe. Yet sadly, all the nice immersive touches that make the actual
tactical, ship-to-ship action so fun are absent from the structure of the overarching
‘campaign’ game.

Players can and will wander aimlessly from sector to sector, choosing to ‘accept’
missions or not. Hello? It’s called Starfleet Command? More often
than not you’ll be running into lamely-explained scenarios which replace the
tutorial’s audio dialogue (done by George Takei) with dashed-off silent text,
repetitive goals (presented with exactly the same static-screen briefings) and
arbitrary assignments.

Speaking of which, here’s some surreal fun: turn off the wonderful, soaring
music, get a streaming-audio comedy routine from Live365
running in the background, then flip back to SFC2 and fight your space
battle with George Carlin riffing about farts in the background. Highly illogical,
but fun!

Still, the game is worth the attention of Trekkies, due in part to the fact that the multiplayer action quite simply kicks alien ass. When two players of relatively equal skill go at each other, each carefully bringing their ship’s unique abilities to bear, each misering the last nanojoule of energy for best effect, the experience is unparalleled…and oddly, very faithful to the tense, armrest-gripping feel of a Star Trek duel.

Now, if only we had hotkeys for the pithy ship-to-ship Shakespeare references…. 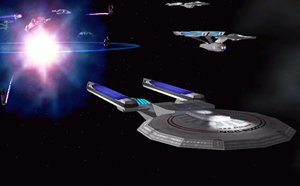 LEGO Star Wars: The Skywalker Saga Review: ‘Not Quite the Star Wars Game You’re Looking For’

It's no Rise of Skywalker, but it's also no Empire Strikes Back.
Games 10 months ago

The Force reawakens...
Originals 10 months ago

Newbies is a series where we look at how friendly long-running MMO and GaaS titles are for beginners. There aren’t a…
Originals 2 years ago