I like my racing games with lots of crashes. It falls somewhere between a passion
and a fetish.
I don’t care what any dystychiphobic
gamer says – there’s nothing like snatching the gold from a smug first-place
racer at the very last minute by driving up to one of his blind spots and giving
him a well-placed tap that sends him spinning out of control, causing a massive
pileup that you just narrowly escape.

So
why is it we few, proud and reckless drivers are given the more comical, less
serious gaming swill that ferments at the bottom of the racing game barrel?
The Playstation version of Vanishing
Point comes to mind, as do countless other arcadey throwaways. Why is a
game that incorporates good crashing considered unrealistic and arcadey, while
games where you barely spin out and never leave the ground are considered simulations?
If there’s no impending threat of being trapped in two tons of reticulated steel,
then your game is doing a piss-poor job of simulating some of the more exhilarating
aspects of real-life driving.

Burnout is Acclaim’s attempt to satisfy the Jackie Chans of the racing
game scene. The game offers some great crashes, but many are so forgettable
it’s nerve-wracking. So buckle up and hold on tight – it’s sure to be a bumpy
ride.

The game places you in everyday speedy sports cars, little compact numbers
and trucks – None of which are actual cars. The game’s difficulty setting is
determined by which vehicle you choose.

You are offered six different modes of play: Championship, Single Race, Head
to Head, Time Attack, Face Off, and Survival. Most are self-explanatory, but
a few deserve mention. Fight your way through Championship against three other
CPU controlled racers and place first or second to open other courses that can
be used in any mode. Face Off is opened once you finish the Championship mode.
Here, you go against one other CPU racer who’s driving a locked car. Beat him
and the car is yours. Survival mode is essentially an endurance race. How long
can you go without crashing?

Taking place in the U.S. and Europe, you’ll race across realistic streets and
roads in 14 courses packed with dense rush hour traffic. The streets have been
sectioned off, though, meaning absolutely no deviations or detours. I would
have liked a few point-to-point tracks instead of the strict laps you find in
Burnout. Besides, point-to-point makes more sense when you’re racing
on everyday streets and roads. Looping around the same section of a city for
three laps at speeds in excess of 100 mph just seems like it would attract the
attention of said city’s finest. Incidentally, there are no cops in this game
at all. How convenient!

Also convenient is the inclusion of the ever sought after racing game crashes.
Burnout purports to be all about crashes, but it takes them to an annoying
level. Indeed, the crashes can be spectacular, with several cars flying end-over-end
causing glorious pileups. However, these prime moments are very rarely seen.
What you usually get are minor, uneventful fender benders and mild scrapes.
No problem, you say? Yeah, well, you haven’t played it yet, then.

Let me explain. Every time you crash, no matter how severe or wimpy, you are
forced to watch three consecutive replays of that crash (a sort of triple
take ala Bloody Roar). That’s fine
if it’s one of the monster crashes, but it could also be a boring fender-bender
that resulted in your car coming to a complete stop. Nothing to see here, you’d
think. Wrong! The developers feel that whenever cars collide, the game should
come to a complete stop while you watch a series of replays.

It gets worse. Hooray! – the game has damage modeling, and it’s pretty
good, too. Booo, hissss! – your car’s damage is completely repaired after
you crash. Allow me to embellish. You’re driving along just fine and a car moves
in front of you forcing a rear end collision. Your front end crinkles up, the
stupid replays start and when they’re done the car is magically fixed like new.
Huh? 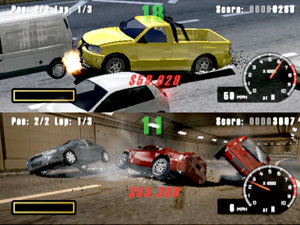 There’s
more. Those annoying replays that totally break up the game’s flow wind up being
totally unnecessary, because at the end of each race you are treated to a decent
full race replay. You can’t customize the camera or the play speed, but it goes
through a bunch of predetermined camera angles that are, for the most part,
fine (except for the first-person view).

You’re also able to access a group of replays that just show the different
crashes that occurred in that particular race. Oddly, here you can move the
camera in any position and you can speed it up or have it play at two different
slow motion speeds. So with all these replays, why the heck do you need the
retarded in-game replays that completely stop the game flow and throw off your
rhythm, resulting in many more uninspiring crash replays?

Continuing down the road of uninspiring design is the overall look of the game.
The graphics could use some serious touchup work. Grainy textures, jagged edges
and a general lack of detail run this game’s aesthetic appeal right into the
ground.

But maybe this is why the game speeds along without a hitch. The framerate
is smoking and solid and I never experienced any slowdown or chugginess. This
is the game’s crowning achievement. Weaving in and out of thick traffic, trying
to find sizable gaps for you to slip through is pretty exciting and easy to
accomplish (thanks to the spot-on control) until you crash, which you will be
doing a lot.

While the control is tight, the camera angles you play from are few; actually,
to be exact, there are two. The standard is the butt-cam, which places the camera
right behind the car, making it very hard to see what is in front of you and
impossible to see what’s over a hill. There’s also the famous first-person view
for all those gamers who’ve wondered what the life of a hood ornament is like.
It’s not particularly a good way to drive.

At least Burnout rewards risky driving by giving you a turbo boost meter.
Drive in the oncoming traffic lane, narrowly escape collisions and utilize long
drifting power slides to add boost to the meter. Kinda cool, but there is so
much uncool stuff here it outweighs the good.

Burnout has so much potential it’s threatening to burst at the seams.
Too bad Acclaim has made sure those seams were made with super-fortified industrial
strength steel tension cables. There will be no bursting. This game’s potential
is locked in tight, never to see the light of day. Excessive replays, an overemphasis
on watching uneventful crashes, terrible camera perspectives, lame stop &
go gameplay and weak presentation make this one little more than a rental 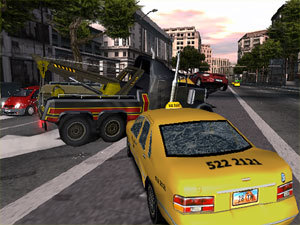 Embarrassing for all involved.
News 18 hours ago

He says the "mistake" won't ever happen again.
News 13 hours ago

A touching moment.
TV 22 hours ago

It's remarkable at one things, lackluster at others.
Tech 4 weeks ago