Speed, gimme what I need. Review

Speed, gimme what I need.

It feels like I haven’t slept in days. The bags under my eyes and the blisters
on my thumbs are a testament to the countless number of hours I have spent doing
battle in the horseless chariots of steel. Even now, the squealing of tires and
roaring of engines continue to echo in my ears. When people see my ragged facial
expression, sore thumbs and Transformers boxers, they ask me why I spend
so much time racing. I tell them it’s not about the hype, it’s not about the cars,
and it’s not even about the review. It’s about the freedom found in high-speed
racing. And the chicks.

With more wins to my name than the great Dale Earnhardt and more cars in my
virtual garage than the entire city of Detroit, I feel it’s time to tell you
all the story of a game that will seize your attention and never let go. Sit
down, shut up, and hold on for “the drive of your life.”

Gran
Turismo 3 is Sony’s latest monster title to be unleashed upon the unsuspecting
gaming public, though they’re not really unsuspecting anymore due to the immense
hype around the game. Developed once again by the amazing team at Polyphony
Digital, GT3 marks the series’ entrance into a new generation of video
gaming. With true-to-life physics and the perhaps the most phenomenal graphics
in video gaming history, Gran Turismo 3 is easily the premier title in
the console racing category. But while the game has reached new heights, it
is still far from racing heaven.

Unless you’ve been living in an ice cave at the far corner of the Earth playing
patty-cake with a yeti for the past year, you’ve seen a screenshot or two of
this awesome game. Ladies and gentlemen, it is no joke. What you’ve seen is
exactly what you get. And what exactly do you get? Well, how does 4,000 polygons
per vehicle, full weather effects (including heat waves, rain soaked streets,
and more), a blazing framerate and the best looking replay ever to grace a console
sound? If there’s one thing that GT3 deserves a cookie for, it’s the
eye crack. Even non-racing fans will stare in slack-jawed silence at the incredible
reflections and eerily realistic cars. Every gamer needs to have a taste of
this graphical wonder.

The audio tracks also perform well. During your drive you’ll get an earful
of tunes from a wide variety of artists. Familiar names such as Snoop Dogg,
Lenny Kravitz, Judas Priest, and BT are just some of the big names assembled
for the soundtrack. Choose only your favorite tunes or take them all out – it’s
totally up to you! Not a bad aural experience in the least.

True to its predecessors, GT3 contains some of the most realistic physics
in a racing game. If you plan on being a successful driver, you’ll have to treat
each race like you’re driving a real car. Don’t even think about taking the
90 degree turn at 300mph, ‘cuz it just won’t happen. Gran Turismo 3 is
indeed the “real driving simulator.”

Actually, GT3 stays a little too true to its past with the exact same
tracks that were in Gran Turismo
2. A mere two new tracks are included and many of you will instantly be
familiar with the seventeen others. Sure, they look MUCH better, but considering
the leap from the PSX to the PS2, the lack of new tracks is a letdown.

Like before, gameplay takes place in two modes: Arcade and Simulation. While
Arcade is great for a quick spin or a friendly match, Simulation mode is definitely
where the real action is. It is here where you’ll gain massive amount of credits,
build up an army of cars and become the greatest racer ever to sit on your couch.

The idea is basic. Buy a car, race a car, tune a car, repeat. You’ll also have
to earn the proper licenses to enter some of the bigger and better races along
the way. 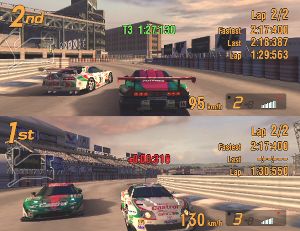 While
the premise is simple, the execution is not. GT3 is not the kind of game
you’ll be done with in a weekend of hardcore playing. There’s even a good chance
of not completing it in a month of hardcore gaming! With five different
leagues and a ton of different class races, you’ll be racing ’til you can’t
race no more. This is definitely a game that will last the long haul.

But for those of you with little patience, GT3 will definitely be a
serious test of willpower with some excruciatingly long races. Naturally, you
start off with just enough money for a soapbox racer and it’ll take some time
for you to earn even the most basic of raceworthy cars. Even when you finally
get into a decent ride, the pace does not quicken. The more advanced leagues
can run 15 laps or so for a normal race on a course you’ll take about 2 minutes
to run. So you’re looking at a half-hour for a single race. ONE RACE! Can you
imagine the frustration of losing (or even second place)? It’s pretty heinous.

Endurance races are even worse. One race has you running the oval for 100
laps. Let me repeat that. One” hundred” laps. If you plan on completing
this game 100%, you’re in for a really long drive.

At least you’ll be able to relive your moments in a glorious replay. GT3‘s
replay is second to none and you’ll be able to check out the race from almost
every dramatic angle know to man. It’s truly impressive.

Although slightly improved, the AI of the other cars still lacks. Opponents
are about as aggressive as Miss Manners and don’t seem to respond much to player
actions. They just seem to follow their pre-programmed driving instructions
to the letter. Try to push computer-controlled cars out of the way and they’ll
just push right back until they’re on course. Then they leave you alone. Wussies.

While the majority of the game has been improved, two notable features of
GT2 are downgraded. While GT2 features over 500 cars, GT3
contains only a fraction of that number. In fact, the
original Gran Turismo holds more cars (166) than the advertised 150+ cars
of GT3. Enthusiasts will be sorely disappointed, but trust me, 150+ cars
is still pretty hefty. Also missing is the used car lot. Each and every car
must be bought new at MSRP- no discounts!

A few features that were on the wish list of GT gamers everywhere continue
to remain missing in action. There is no place to drag race and you still can’t
damage your car no matter how hard you try. And contrary to the advertised “fully
customizable” cars, you cannot modify the exterior of your car beyond the wheels.
So all you customization freaks out there are just plain out of luck. No fat
GReddy tip, no ground effects from C-West, no spoilers – nothing. Surprisingly,
you can’t even change the color of the car once it’s selected. If you win the
pink car, it shall remain pink forever. At least you can still sell it.

All things considered, Gran Turismo 3 is definitely the kind of game
you’ll use to show off the power of your PS2. GT3‘s amazing graphical
achievements and life-like physics result in one of the most advanced racing
games on the market. There are a few things holding it back from perfection,
but anyone that loves the excitement of a good race should certainly check this
one out. Now if you’ll excuse me, my supercharger just came in. 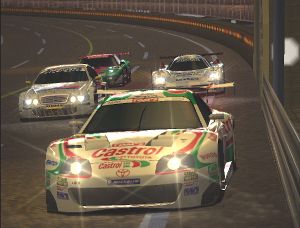 His story has come to a head.
News 3 weeks ago