It’s A Squall World After All. Review

It’s A Squall World After All.

Sora, Riku, and Kairi have lived their whole lives on Destiny Island. The dream
of exploring what lay across the waters has always filled their minds and wracked
their souls. Then one day, their world was torn apart.

Out
of the darkness come the Heartless, soulless and shadowy forms that seek destruction
– destruction that takes Sora’s two best friends away from him. As his friends
are pulled into the void, Sora tries to clasp Riku’s fading hand…but Riku
is drawn into the black. Sora’s hand emerges, grasping at something else altogether.
A strange sword, shaped like a key…

Elsewhere in the universe, another kingdom has its own problem. The King has
gone missing, leaving the Court Magician, Donald, and the Royal Knight, Goofy,
to tally forth and find the sovereign. Their only answer is to seek the one
who holds the Keyblade…

The collaborative efforts of Disney and Squaresoft, Kingdom Hearts
is the emulsion of Disney imagination and Final Fantasy pathos. The first
glimpses of Sora sharing the screen with the duo of Donald and Goofy is like
a brain fart of incomprehension.

But it works. Beautifully. The Disney elements are surprisingly sincere and
charming, and the meshing of this with Square’s classic, dramatic role-playing
bend makes for an enjoyable story that pays homage to both source materials.

You take on the role of Sora, searching the lands for your lost friends while saving the day over and over again. I don’t even want to reveal any of the Disney movies that encompass Sora’s dimension-spanning voyages – part of the fun is just the surprise of where you end up next – but know that you’ll see many, many familiar characters along the way.

Just don’t get into Kingdom Hearts expecting Final Fantasy.
While Sora’s adventures are interspersed with several classic Final Fantasy
characters, their involvement is limited compared to Uncle Walt’s ilk. Yet seeing
some of these characters alive and running again is very, very cool for Square
fans.

The combat revolves around button mashing, so for the most part, you’ll be
running around, targeting, and striking a few hits. There really should have
been a charge move among Sora’s different attacks, at least to curtail the mashing.
While there are also magic spells and summons, whittling away with your keyblade
will be the norm. There are selectable shortcuts for up to three magic spells,
but no shortcut method to quickly access items.

The big problem with Kingdom Hearts is the camera. It’s awful any way
you cut it, whether you choose the Automatic Camera that swings around drunkenly
or the Manual Camera that requires too much babysitting. When you lock-on to
an enemy, the camera takes its sweet time to center the view. 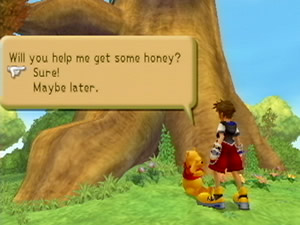 Fending
off a frenzy of swarming shadow beasts, Sora tends to get lost in the menagerie
of the dizzying swoops of the camera. The camera gives enough to get a sense
of the battle and enough to keep it playable, but it’s far from pleasing.

Donald and Goofy comprise Sora’s backup crew, both controlled by the computer.
Certain denizens of the explored worlds will offer a helping hand, temporarily
replacing Donald or Goofy. The actions of the computer-controlled buddies can
be adjusted through selectable constraints that control how they attack, cast
magic, and use items. You can also direct your teammates to attack a specific
enemy. Mostly, these guys work as cover fire, dampening the heat of battle.
Thus, keeping them alive is to your best advantage.

The boss characters and the one-on-one tournaments of the sword force a more
strategic fighting approach, closer to a Zelda:
Ocarina of Time experience as you figure out how to work around the enemy’s
patterns and find openings to attack. Plus, since you are only fighting one
character, the camera is much less wily and crazy.

When you aren’t fighting, the camera remains at a constant distance from Sora, direct and low to the ground. The camera’s range of controllable motion is limited to left and right. A more easily adjustable viewpoint with variable distances and alternate angles would have gone a long way towards improving the caustic camera.

Despite its emphasis on real-time action, Kingdom Hearts carries a
strong sense of statistical involvement nested in RPG roots, which operates
as the backbone behind battles. It’s rewarding in the Phantasy
Star Online sense when you realize how much stronger your character has
grown. A big, chubby Heartless that used to take ten hits to beat down can now
be struck down in two.

The only equippable items are one weapon and a varying number of rings that
can alter different aspects of your characters, such as raising Elemental Defense
or increasing your HP and MP. As Sora and his posse level up, they gain points
that can be rationed out to different abilities accumulated along the way, similar
to Final Fantasy IX.

Kingdom Hearts can’t really be thought of as an outright action game;
it’s more like an adventure game with active battles and platforming bits. Speaking
to NPCs offers critical clues and triggers the next event, and interactive objects
can be found and selected via the lock-on camera. 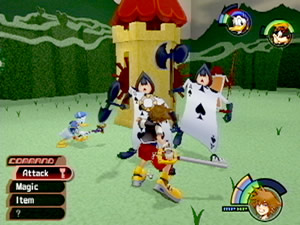 Initially,
the various goals are less than thrilling. The very first task involves an uninspired
item hunt. Later, another world doesn’t offer clear direction, leaving you to
wander around attempting to trigger the next flag. Thankfully, later worlds
improve on this and eventually the game find a great flow.

In order to traverse the universe, Sora has access to the mythical Gummi Ship. This has absolutely nothing to do with the Gummi Bears and it’s far from being sweet and delectable. Rather, the Gummi ship offers a simple arcade style mini-game. The ship is also customizable, but manipulating the blocks in a 3D workspace isn’t naturally intuitive. The Gummi Ship isn’t horrible and doesn’t demand that you put a huge effort in, but it’s just out of place in a game already packed to the brim.

Visually, Kingdom Hearts is resplendent in bright colors that capture
the cartoon characters perfectly. The textures aren’t the most detailed and
lighting tends to be consistently sunny, but the look is still there. What really
takes center stage is the fluid character animation, from the waggle of Donald’s
fluffy tail to Goofy’s tall lank. Thankfully, the character’s mouths have all
been synched to the voices, strengthening the storytelling and keeping it “real.”

Kingdom Hearts boasts probably the most talented pool of voice actors
ever collected for a video game, from several star-studded notables to Disney’s
fantastic stable of character actors. These voices vividly bring the characters
to life, reviving old friends from movies long ago. Even though the high-profile
Haley Joel Osment voices lead character Sora, you don’t think of him as the
“I see dead people” kid. His voice just comes out as Sora.

Fortunately and unfortunately, none of the characters suddenly break out in
song. The closest thing to a musical number is Kingdom Heart‘s theme,
Utada Hikaru’s Simple and Clean. It’s wistfully beautiful in the same
teary vein of Final Fantasy 8‘s
Eyes on Me, but I really wish Simple and Clean had gotten more
play. Perhaps if the song’s melody were threaded into the other musical arrangements,
the game would have felt more aurally unified. Instead, the general music tends
to be short and looped. Some tracks take music samples from their source movie,
while others are simply in the spirit of their respective worlds.

I think your enjoyment of Kingdom Hearts will weigh heavily on how
much interest you have in old memories of Disney, or at least how willing you
are to allow your inner child out for a while. The action does take a backseat
and the camera should be locked in the trunk, but the story and art at the helm
can be very moving. I almost wish that Kingdom Hearts was an animated
movie.

But what sets Kingdom Hearts apart from the movies it captures is that
it IS a game. Interacting with all these characters that previous only existed
on the silver screen is, in a word, magical. 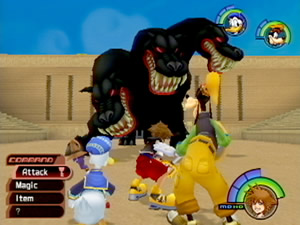 Don't forget about these incredible games.
Originals 2 months ago

Was That Red Hulk in the She-Hulk Finale Trailer?