Rebirth of the Cool. Review

Rebirth of the Cool.

The Cool Boarders series is one of the oldest around, spawning a whopping
5 iterations for the original PSX. That’s a lot of sequels for a snowboarding
game – and considering the poor quality of the last one, at least one too many.

Now that the PSX is on its way out and the PS2 is on its way in, Sony and
Idol Minds have churned out yet another one in Cool Boarders 2001, which
represents a balance between the fun and the insufferable…with a bit more
of the former, thankfully.

CB 2001 is very similar to its
PSX predecessor. Many of the racers are the same (which makes sense, since
none of the real people they’re based on have died or anything), many courses
are the same, and the gameplay is largely identical. If you’re a fan of the
CB series, this game will definitely deliver.

Especially since this latest is also the greatest. The differences between
this CB and the last one are nearly all positive.

The most noticeable (and obvious) improvement is graphical, due mainly to the system upgrade. The boarders are all well sculpted, the environments are very smooth and pleasing (no grainy snow here), and the animations match the gameplay like a case of beer matches the GR headquarters. Even the static animations, like the subtle waving of arms during a rail grind and the unsteady bobbling after the completion of a terrific jump, are done accurately and thoughtfully.

Coupled with the quality animation is a swell framerate that never lets you
down, even in hairy spots like wooded areas and obstacle courses. CB 2001
is a relatively speedy game. It’s not necessarily fast or daunting, but there
are some exciting moments and the pace accelerates as your player gains speed
points.

However, the pace of the game slows down a bunch when you start to get into the tricks. The basic tricks come in more flavors than a pack of Skittles, but they’re too easy. By the time you get a quarter of the way through the game (if that far), they become as bland and dull as an old wad of pre-chewed bubble gum.

The game tries to compensate for this via complex Special Moves, which involve
some combination of the L and R buttons while charging up for the jump. While
a few of them are pretty awesome and require some wildly dexterous skills, many
of them just require luck. Even though they score about 5,000 points a pop,
they’re far easier to pull off than, say, a 720 stalefish, which only racks
up half the points. The less valuable moves are cooler because you’re in control
of them while they’re happening, as opposed to the specials which occur completely
on their own once you enter the sequence and press ‘jump’. 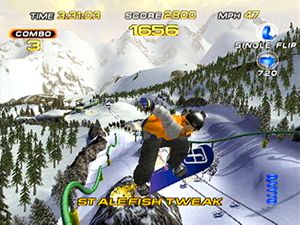 The
psychology seems to be that when you execute a really difficult sequence, you
then get to sit back and watch the awesome results. However, the specials don’t
get difficult until later in the game, and the brief loss of control ironically
stunts your enjoyment of the trick.

The levels themselves are a pretty mixed bag. Some require you to haul down a mountain without missing more than three gates, while in others you’ve got to rack up points and/or sequences. The racing levels are probably the least frustrating, with the tutorial (called challenges) levels being the worst.

The tutorials are frustrating because each contains about 10 parts, 4 of which are usually pretty tough, and you can only miss three. You’ll be jumping the same jumps and doing the same tricks over and over and over again in these levels, and they really take the steam out of the game.

Cool Boarders 2001 plays out through a Career mode in which you beat
levels to unlock players and other levels until you’ve finally unlocked everything
and beaten the game. With nine different event types, there’s a lot here. There
are also Quick Race options and multi-player options, neither of which offers
anything new. Still, playing against a friend can up the replay value.

The environmental sound effects, like the snowy-swoosh of your powder-dicing board, are top notch, while the mundane and often irritating comments of the boarders grate on your nerves. The only guy who says something remotely interesting is Trent, who says “Jackelope,” but he says it all the time. Jackelope. Doh.

Cool Boarders 2001 has the unenviable task of competing with SSX,
hands-down one of the best games for the PS2 and one of the best snowboarding
games ever. While it doesn’t hold up in a side-by-side comparison, it still
offers a solid snowboard experience that’s certainly worth a look. 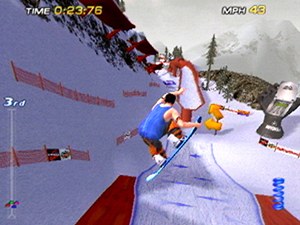 Raised by devout and strict Raelian parents, Joe Dodson's goal in life is to prove that aliens do exist, and want to eat us. He is currently honing his writing skills by writing and editing video game reviews about, you guessed it, aliens that want to kill us all.

In his spare time, Joe likes to watch scary movies and pwn nubs as Holyhank the evil dwarf.