It got game. Review

You couldn’t get through 20 minutes of watching the NBA Playoffs this year without
seeing at least two of those Nike commercials with the fancy shmancy dribbling.
Not that this was a bad thing; if you’re into handles, those commercials are virtual
clinics.

It was really only a matter of time that we’d see some of this stuff incorporated
into a b-ball title, and in EA’s new NBA Street, fancy juke moves and
over-the-top action is the name of the game. But unlike the played-out NBA
Jam series, this new entry is tons of fun, looks great and will have you
trash talking louder than Gary Payton in a room full of rookies.

If you’ve played any of the NBA Jam games (I think there are 4 million
versions so far), you’ll be instantly familiar with the concept. It’s three-on-three
arcade style hoops, featuring all 29 pro teams and a few fantasy squads. Games
go to 21 and (of course) you have to win by 2. It’s just like the schoolyard,
except you’re on the couch, you sweat a lot less and chances are no one will
try to shoot you if you foul them too hard.

The main game mode is Circuit City, which lets you take a team across several regions and a bunch of street courts, challenging other NBA teams as well as 6 special street legend characters. You start only with access to the normal NBA teams and, believe it or not, His Airness, Michael Jordan. Guess they’re trying to make up for those ‘license problems’ years when Michael wasn’t in any NBA games.

When you beat a team you can either grab one of the five players available from that team to include in your roster or opt for more development points for your created character.

The player creator is solid and the scheme of gaining development points by
playing the Circuit City mode strikes a good balance. You get rewarded for playing
well, which is great. There’s nothing worse than a creator that just hands you
all the points you’ll ever see. Oddly, the loading times for the player creator
sucks. Makes it hard to want to wait to see the different kinds of shoes.

When you beat Circuit City you can always move on to Hold the Court, a sort
of survival game that rewards you with more player creation options, like new
skins. You can also learn the basics in Street School, which is actually a helpful
and pleasantly short tutorial, though you’ll only do it once (if at all).

NBA Street is part of the burgeoning EA Sports “Big” line, alongside
the excellent SSX. While basketball and snowboarding don’t have a lot in common,
the two games share similar control schemes by relying on the four trigger buttons
as a means to pull off tricks, or in this case, amazing juke moves.

Tricks actually play a bigger role than just looking cool and shaking off defenders.
The burlier the tricks and the cooler the combos you pull off, the quicker the
‘Gamebreaker’ meter fills up (akin to the boosts in SSX). The Gamebreaker does
just that – breaks the game open. If you make a Gamebreaker shot, you’ll gain
a point (or two) and your opponent will lose a point (or two). This 2 or 4 point
swing can quickly change the face of a close game, and while it sometimes feels
a little cheap, the fact is that pulling off tricks and burly combos is risky.
Again, it’s nice getting rewarded.

For that matter, the overall control in NBA Street is tight, responsive
and simple. Even a non-sports gamer will hop on and score a few in no time,
though there is certainly a learning curve when it comes to mastering the tricks.

NBA Street is a good-looking game, featuring some of the best motion-capture
seen in any b-ball game to date. It’s hard enough getting a guy to bounce a
ball realistically. Imagine getting him to dribble behind his back, pull off
a side step juke, do a Hardaway crossover into a ground roll only to elevate
into a 360 reverse tomahawk. It flows, baby, and it looks really cool.

Add to that plenty of nifty particle effects, great shadowing, accurate player faces and a framerate that keeps up and you’ve got the graphical equivalent of a Jamaal Wilkes baseline fadeaway. Smooth. 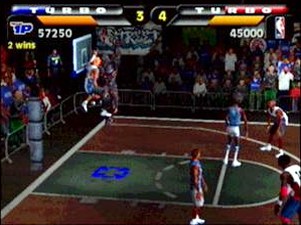 The
game is chock full of ‘tude, basically a time capsule of current slang. 20 years
from now, you’ll be cracking up when you hear things like “What up, playa?”
and “Pick yo’ team, dawg!” from announcer Joe The Show. Most games that try
to pull this off sound like old people trying to be hip. NBA Street actually
manages to sound authentic… if a bit silly.

NBA Street soars as a two-player game. Remember all that fun you had
with NBA Jam in the arcades when it came out so many years ago? Well,
be prepared to relive the glory days. This one is tailor made for late night
smack talking with the boys (or girls).

Unfortunately, there’s no support for more than 2 players, despite the fact
that there are never any split screen issues to worry about. This game could
have warranted actually buying a Multitap adapter to play with more than one
friend…but alas, we’re not so lucky.

While the control is great when you have the ball, you don’t have enough control over your teammates. Alley-oops mean big points, but they happen randomly, only when your teammates decide to jump towards the basket. You cannot call them out yourself, and sometimes you’ll pass to the wrong guy.

You can block shots like its no one’s business, but steals are sort of random and harder to pull off. In fact, the emphasis on shot blocking means that the taller players have something of an advantage over shorter guys. Since there’s no goaltending, you can spend most of the time controlling your giant center just waiting for someone to throw up a shot. Smaller players can come in handy on offense, but are often defensive liabilities.

NBA Street doesn’t claim to be any more than an arcade game, but it
could use more depth or options in certain areas. You can’t change the number
of points (it’s always 21) or play with, say, only two guys per side. The game
could also benefit from player-specific moves. As it is, the only thing that
differentiates one guy from another is his look and stat levels. How about giving
Iverson a nasty proprietary crossover or something? This would have greatly
extended the life of the game.

Still, these are all relatively small problems in a big game. NBA Street
is a hugely fun b-ball game that hoop fans can’t do without. It’s got tons of
character and solid gameplay. While the depth of sims like the NBA
Live series is missing, NBA Street manages to capture the excitement
and energy of the street ball most of us are far more familiar with. A good
buy. 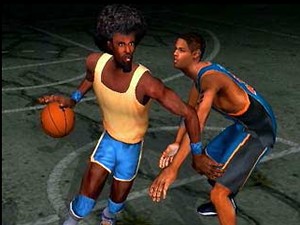 It's finally falling this May.
News 4 days ago