When Bushido Blade 2 showed up in the office, I was curious whether or not the kids over at Square had kept the ‘if it ain’t broke, don’t fix it’ credo in mind. The original Bushido Blade took the gaming world by storm with a revolutionary fighting system, not to mention the most ‘traditional’ and honest game we had seen in a while. All faults aside, the original really did some cool stuff and pointed the genre in a new direction. Would its sequel just be another serving of the same, or would it try and fix what wasn’t really broken to begin with?

In a word, it does both.

Bushido Blade 2 takes all the elements that made the original so unique, throws them into a hat, and almost randomly chooses which ones to keep and which ones to toss into the furnace. In the end, we have a game that is both disappointing and remarkable, a sequel that is a step in a…uh…slightly ‘hipper’ direction.

The plot revolves around two samurai families, the Narukagami (the good guys, sort of) and the Shainto (the bad guys, in a way). The two have been bitter enemies for hundreds of years, and at long last their entwined fate must be decided. Of course, things get much more complicated and confusing along the way – after all, this is a Square game.

Bushido Blade 2 embraces the same basic principle that either made you love or hate the first game. As in the original, this is a 3D fighting game with the ultra-neat gimmick of real-life health meters. In other words, there are no health meters – get stabbed in the stomach, and you die. Get poked in the head, and you die. There are no fireballs, no 75 hit combos, no hour-long Tornado kicks. Simple. Effective.

And different. The combat system in Bushido Blade 2 is different from the original in several ways. For starters, there’s no longer a ‘block’ button. In order to bat away an enemy’s advance, you have to deflect his attack with your weapon. There are five possible outcomes, ranging from the perfect block to the unfortunate fatal hit. Instead of a damage meter, body parts can be weakened by successful strikes. In effect, you can disable your opponent without killing him/her. But unlike the original, you can’t disable someone’s legs – only their arms can be affected. This is a strange and unfortunate omission. I personally liked having to fight from the ground every once in a while. It added to the realism.

The lack of a block button, however, creates even more tension. Standing toe to toe against your rival, waiting for the first strike and knowing full well that either of you can die at any moment, is just fantastic.
You can’t just sit back and tap the ‘parry’ button until the other guy gets bored. This really spices things up and increases the pressure.

Those of you familiar with Bushido Blade will remember the at times irritating,
at times brilliant aspect of Bushido Laws. In a nutshell, certain things are
considered a no-no in fighting, such as stabbing someone in the back or when
they are on the ground. In Bushido Blade 2, the code of Bushido has disappeared.
Smack ’em when they’re down, when they’re running away, whenever you can get
in a good swipe. So much for honor. 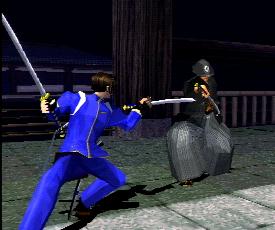 Also missing is the ‘free roaming.’ In the original, you could literally run off the screen to a new location to continue your fight. While not really adding anything to the gameplay, it definitely showed promise. Well, forget about it – you can’t just run away anymore. Each battle is fought on one and ONLY one battlefield.

Other aspects of the gameplay are the same. You have three distinct stances, each of which leads to a new set of attacks. Different moves are accessible to each character AND each weapon, and certain characters perform better with certain weapons. The ‘second’ weapon notion is back, but is much more effective. In the original, all special weapons were thrown and none could cause a fatal hit. In this game, some special weapons can kill, some can be thrown consecutively (to throw your opponent off balance), and some can actually be used as a second sword. Two-sword fighting is a blast and a great addition.

The number of characters has increased. While only 6 are initially selectable, you can enable more. In all, there’s a grand total of 18 playable characters. Nice.

The number of weapons, however, has stayed the same, with the strange absence of the Rapier (made me feel like a pirate). One new weapon, the Yuri (Big Spear), is included.

One of the most overlooked elements in the original was the POV mode, a first-person fighting view. This was quite revolutionary and really hasn’t been seen since. Well, POV mode is back, and this time you can use it in any mode of play (unlike the limiting “POV Mode” in the original). It’s tricky to get used to, but really adds a whole new level to the game. 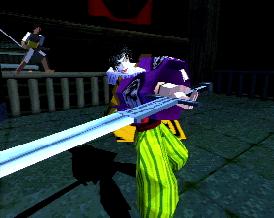 And speaking of modes, there are a ton of ways to play this game. The aforementioned Story mode allows you to uncover the pseudo-plot and unlock sub characters. Then there’s Training mode, Link Mode (for all 5 of you who own a Link cable), Vs. Mode, Vs. CPU Mode, and the awesome Group Battle Mode. In Group Battle you and a buddy choose sides and begin a tournament using bamboo weapons. You can only select each character and weapon once, so some strategy comes into play. The tournament has its own set of rules and really plays well. Another great addition.

The graphics are a step up from the previous game, with fewer polygonal errors
and a wider color palette. Characters move fluidly and look great. The backgrounds
are nicely textured and the FMV and rendered cut-scenes look good.

The sound is a bit less inviting. Weapons clang with more realism, but the
voice-acting sucks. We’re talking late night/early morning why-am-I-still-awake
Kung-Fu movie bad. And the music is much heavier on the glam-metal, though occasional
moments of traditional Japanese melodies offer a brief respite from the schlocky
guitar mayhem.

The strangest thing about Bushido Blade 2 is how much less traditional the game as a whole feels. From the cheesy music to the wacky outfits and hokey voices, the game almost feels like a mockery of the original. And just when you think it can’t get any worse, along comes a sub character named Tony Umeda, whose 70’s pimp suit and Jackson 5 afro stand in stark contrast to the Japanese samurai story and design. Yup, he’s a disco dancin’ ghetto king. I guess the Square guys felt they needed to add some arcade chutzpah to the game. I kind of liked it before, honestly.

When it comes right down to it, Bushido Blade 2, while in many ways different from its namesake, will pretty much appeal to the same crowd that dug the first one. It will also turn off those of you who prefer a more up-tempo and flashy fighting game. As a stand alone game, however, I really must say that I’m impressed with Bushido Blade 2. It has enough of what made the first game exceptional and adds some flavor to the broth.