What a ditz. Review

In this cyber-era of electro-innovation, brilliant new answers to old dilemmas
seem to come a dime a dozen. Now the kids at THQ have shed light on one of the
most horrible male puzzles ever to be riddled. The riddle? “What do you buy
for fifty bucks if you can’t spend it on a prostitute?”

Many a night I have pondered this question, but sadly have come to no real
solution. Truthfully, neither has THQ. But they have come up with something
that you should definitely NOT spend fifty bucks on, and it is… Danger
Girl!

In Danger Girl, THQ has ingeniously created a game that seems to offer
everything a snot-nosed, adolescent gamer could dream of…but delivers none
of it. Indeed, beneath that double-D Danger Girl wonder-bra is tissue
paper, and a couple other things that have been done far better elsewhere.

Which is unfortunate, because theoretically, Danger Girl is a kick-ass
concept. Take all the best aspects of a third-person shooter, dice ’em up and
put ’em back together, throw in some T and A, and you’ve got the videogame version
of that chick in Weird
Science. Unfortunately, in Danger Girl’s case, what could have
been a super model turns out to be Gabe Logan’s retarded twin-sister.

The game is based on the marginally successful J. Scott Campbell (from Gen
13 fame) comic book series. But where the comic book’s over-the-top presentation
had some kitsch value, it sure didn’t translate well.

The plot is totally unoriginal and poorly construed. Major Maxim (a.k.a. Bane
from Batman) and Natalia Hassle (the Baroness from G.I. Joe) have
gotten together with the Nazis to take over the world, and the Danger Girls
are the only ones who can stop them. You’ll find scores of sexual innuendoes
(like the level titled “Rigged to Blow”), and a few of the most shameless yet
hilarious expositions of digital boobery ever seen. However, in keeping with
the rest of the game, the sexual themes are awkwardly interwoven.

Danger Girl is basically Syphon Filter
without all the innovation and care. You play as three different Danger Girls
and can run, jump, shoot stuff, climb on stuff, and fall off of stuff. You can
basically do a lot of stuff, but you don’t do any of it well.

Nothing in this game is fast or sharp. The combat, which basically involves
sneaking up on the dumbest enemies ever and shooting them in their empty heads,
doesn’t cut it.. Hell, Danger Girls can’t even kick. There is no hand to hand
combat at all; the closest thing to it comes in the form of Sydney Savage’s
whip, which is a totally worthless prop. The only reason it was included in
the game was so the developers could put a screen shot of her using it on the
back of the CD case.

Having said all that, the action in Danger Girl isn’t miserable. But
nothing seems very "dangerous." In fact, the whole game seems sedated,
from the way the Danger Girls run to the way enemies just stand around, seemingly
waiting for you to put them out of their stupor.

To their credit, the developers did mix in a few original maneuvers (such as diving while strafing), but these aren’t integrated well enough into the overall control scheme, and as a result are only useful in certain isolated circumstances.

Danger Girl’s graphics follow this same mediocre pattern. Someone deserves
props for really fleshing out the ass animations, though such ass-care seems
to have come at the cost of drab backgrounds, drab enemies, and drab violence.
The crummy backgrounds really aren’t that noticeable and mainly become static
as you progress in the game (not exactly a good thing), but the lack of care
put into the enemies is genuinely irritating. From a distance of more than ten
or twenty yards, all the enemies’ body parts start to meld together into one
murky mass. 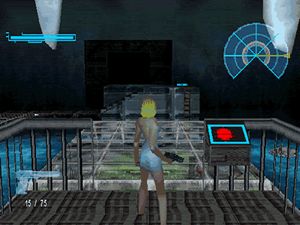 This
is aggravating because if you don’t hit the enemy in the head, they take four
shots to kill. However, this is only a matter of ammo-conservation, since the
enemies usually just stand there and let you fill ’em full of holes.

Furthermore, the violence is definitely unsatisfying. You’d never know you
shot someone if this vague, pink blotch didn’t wink at you from where they took
the hit. The enemies never react to bullets until they die, and then they just
slump to the ground. The same goes for a Danger Girl. Danger Girl Sydney Savage
could be getting blasted from all sides with sawed-off shotguns, and she’d never
even move. Not a wince or a nipple twist or anything.

Danger Girl‘s background music is sufficiently ambient to give you
a twinge of anticipation. However, the fun stops there.

The sound effects are as bland as the graphics. For example, whenever I decide to shoot at something with my AK, I always appreciate how violent and crass it sounds. The gun sounds like murder. But when Danger Girl Abbey Chase fires hers off, it really doesn’t sound like anything, which is fitting because she usually isn’t really shooting it at anything. So at least the game is somewhat consistent in its mediocrity.

But nothing is as bad as the voice acting, some of which is so bad that it
must be some sort of joke. Two examples: the voices of JC and Valerie. JC is
the young, cute, tom-boyish Danger Girl who really hasn’t proven herself yet.
And by the way she looks in the instruction book (the game looks sooo much better
in the instruction book), you’d think she had a really cutesy, phone-sex style
voice. But she sounds like a fifty-year old Jewish woman with emphysema (My
mom? – Ed.) It’s horrible. It’s got to be a joke. But it isn’t.

Then there’s Valerie, the nerdy computer chick, and she has this chunky, fat-woman
voice. I can’t explain it, but just from hearing the way she talks you’d think
Valerie was 300 pounds and stuffing her face with burgers and fries…a far
cry from her slim figure.

No one can hear you scream.
Games 2 days ago
10

Ove and out.
News 4 weeks ago