Kill or be killed…or just sneak past ’em! Review

Kill or be killed…or just sneak past ’em!

Hmm… only one way in, and it’s being watched by three guards, two surveillance cameras, and a wall-mounted machine gun. My plan? Hell, I’m a walkin’ army. Chances are I’ll take a few hits, but as long as I’m breathing I’ve still got a chance.

Think I’ll knock out those cameras with a chaff and spray the joint with my FA-MAS. Sure, the blood may splash on my duds, but no one said counter-terrorism was pretty. Saving the world can be dirty business.

Welcome
to Metal Gear Solid, the latest from Konami and one of the most anticipated
games of the year. The hype within the gaming community has been enormous, a
sign of either a sure winner or an insufferable loser. Well, I’m happy to say
that MGS is the former, a game that comes pretty darn close to meeting
all its lofty expectations.

You are Solid Snake, ex-member of a special forces team called FOX-HOUND.
Having been living in isolation in Alaska to escape the madness of war, you
are once again called upon to rid the world of evil (pesky evil, always getting
in my soup…). It seems that some members of FOX-HOUND have taken to terrorism,
capturing a nuclear weapons disposal facility on an island near your home. You
are called in to penetrate the base, rescue hostages, and eliminate the terrorist
threat – or sit back and watch World War 3 unfold.

I vividly recall Metal Gear for the NES, one of the best games ever made for the system. I played it endlessly, amazed by the combination of stealth, combat and gadgetry. After two sequels, Konami realized they had a good thing on their hands, and MGS is much in the same mold as its predecessors. You’ll need to use both stealth and sheer force to succeed.

The game is played from a wealth of camera angles. Reminiscent of Resident
Evil, you guide Snake primarily via a top-down view, though the backgrounds
in Metal Gear are entirely 3 dimensional. The camera pans to follow you at fixed
positions, such as when climbing a spiraling staircase. You can also see through
Snake’s eyes using a first-person perspective. Unfortunately, you can’t move
while doing this – it’s mainly for identifying doors and objects.

The graphics are fantastic. Almost all objects (including Snake himself) are
polygonal. There are few clipping errors and the characters move smoothly. The
level of detail is unrivaled – you make footprints in the snow that will eventually
get covered up by snowfall. You can identify guards and other characters by
their breath in the cold air. Water effects are accurate, light sourcing is
dead-on, and the textures are solid. On the other hand, since you are infiltrating
only one base for the whole game, there isn’t a tremendous amount of variety.
You tend to see the same kinds of rooms again and again – but in a way this
helps to establish the environment. In all, these some of the finest graphics
around.

The sound is fabulous as well. From full orchestrated tracks to the best voice-acting
this side of Blood Omen, MGS is a treat for
the ears. Guns and items sound appropriate, footfalls differ depending on terrain,
and explosions are burly.

As an ex-mercenary war maven, Solid Snake is adept at using a wide assortment
of cool items. Ranging from the useful (keycards) to the curious (cigarettes)
to the downright strange (cardboard boxes(?)), the gadgets are essential to
your success. There’s even a set of binocular scopes that allow you to zoom
in on locations while staying safely out of range (much like the sniper rifle
in Goldeneye). Very cool. 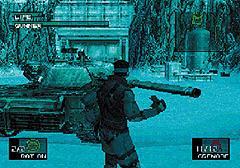 Then
there are the weapons. What killing machine would be complete without a nice
supply of violent noisemakers? Pistols, rifles, grenades, missile launchers…
you’re here to kick some ass. If you wind up weaponless, you can punch, kick,
and even strangle the bad guys. Again, very cool.

The gameplay requires you to proceed with caution at times, with sheer brutality
at others. In the upper corner of the screen you’ll find your radar. Here you
get a vector based lay of the land and the location of doors and enemies. You’ll
also see a ‘line of sight’ cone emanating from your enemies. If you enter this
cone, you’re spotted. The guard sounds the alarm, your radar jams and all guards
within earshot come to blow your head off. To sneak past enemies, you need to
use misdirection (i.e. tapping on walls to divert attention) and patience.

In general, however, stealth is not quite as integral to MGS as it
is to Tenchu. Of course, sometimes you just might want
to take on all the terrorist punks you can handle (sometimes you’re forced to).
The combat is pretty straightforward – just aim and fire. The variety of weapons
require a variety of combat techniques, from fist fighting to sniping.

Frankly, this is quite possibly the most engaging and immersive game you’ll
see for the PSX. The plot is brimming with twists and turns, and as the story
develops, the characters become more fleshed out. Genetically enhanced soldiers,
invisible ninjas, misguided patriotism, betrayal, murder – this game’s got it
all. Every last detail is covered – they even explain how you manage not to
freeze while running around in Alaska. In fact, the little things covered in
MGS really make the game stand out.

For instance, to save your progress you have to use your Codec, a communications device implanted in your head. You also use this to contact various allies at different frequencies. This acts as sort of a hint system as well – they give you advice on what to do in your current situation. 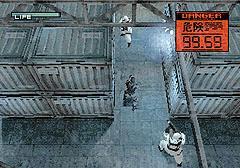 And
then there’s the level of interactivity. Konmai pulled out all the stops to
ensure that you WILL be pulled into this game. By picking up on what kind of
hardware you’re using – controller type, memory card, etc. – the game demonstrates
that it’s almost as smart as you. Just check out what happens with Psycho Mantis…
(I won’t spoil it)

So with all this good, is there anything holding this game back from a coveted Game Revolution ‘A’? Well, I’m glad you asked (I’m talking to myself again, right?)…

Metal Gear Solid is too short. The game can be completed in about 10
hours (more or less, depending on how good you are), which just isn’t long enough.
Since there’s no two-player mode, you pretty much have to play the game over
and over again if you want any more action. While Konami threw a veritable plethora
of easter
eggs and secrets to keep you going, the developers could have just taken
more time to create a longer game. It takes up 2 CD’s, though most of this is
due to the enormous amount of cut-scene and FMV.

Too much. Just too much movie watching. While the TONS of rendered cut-scenes are great at drawing you into the game, they also get a bit…boring. I’m estimating that roughly 40% of the game is spent watching the story unfold, not actually playing it. With such excellent graphics, gadgets, and gameplay, one wonders why they didn’t either crank out another CD worth of game or cut down the amount of movie watching.

Also, there are these long stretches of using the Codec that involve you listening
to Snake talk to his friends about nothing: the weather, Chinese proverbs, you
name it. You’re basically stuck staring at two faces on the screen and listening
to dialogue. It’s just filler, background stuff to help immerse you. Again,
nice to have it there but not in such prodigious quantities.

I have a few other minor gripes, including the sketchy control. Too often
I was shot because I couldn’t face the right direction to shoot back. The control
while crawling is also very shakey. But this just takes getting used to – eventually
you get the hang of it.

Let’s face it – the hype surrounding Metal Gear Solid would be hard
for any game to match. It won numerous awards after E3, and deserved most of
them. In the end, we have a great game, one of the best for the system. But
its diminished length and excessive no-interactive plot hold it back from truly
reaching the highest plateau. Still, this is a must have for any PSX library
and a ton of fun.

The hype is building.
News 2 weeks ago
7