Is this what’s hiding in the closet? Review

Is this what’s hiding in the closet?

Poor, pathetic Cookie Monster. At one time, he was at the top of his game, hanging
out with pros like Kermit and Big Bird. But suddenly and without warning, scandal
broke loose. Cookie Monster doesn’t eat those cookies… he just breaks them and
tosses them all over the floor! Doesn’t he know children in the streets of Zanzibar
are starving? For shame!

As
the glimmering spotlight shifted towards newer and fresher monsters, Cookie
saw his once bright star fade from the public’s eye. His search for a new career
turned up empty. Who would ever want to hire a has-been, typecast, fake-cookie
eating monster school dropout? If only poor Cookie listened
to Mr. T and stayed in school, things might not have ended up the way they
did.

At Monsters Inc. Scare Island, Cookie could have taken that bold step and
entered the exciting world of professional scaring. With both day and evening
classes plus job placement assistance, Cookie could have found a place next
to major leaguers like Mike and Sully, stars of the new Pixar movie Monsters
Inc.

Monsters Inc.: Scream Team is a 3D platformer that is an offshoot/precursor
to the movie plot. The game centers on the exploits of the two stars and their
education in Scare-ology 101.

Either Mike or Sully can be used to play the game’s 12 stages. Each has a double
jump and a spin-style attack, but only Mike can hover and only Sulley can whack
stuff with his tail. The approachable puzzles and game design are aptly suited
towards the 5-10 year old crowd, but still end up being rather short even with
added scavenger hunt style challenges. After every 4 stages, you must race against
Randal, the chameleon monster in a classic slide-and-collect-coins race (ala
Mario and the Fat Penguin in Mario 64).

Monsters everywhere (except for the wussy monsters on a certain Street) know
the importance of scaring. The screams of children are a natural resource, vital
for providing electricity to monsters the world over. In preparation for scaring
actual children, robotic children called NERVES are scattered throughout the
stages. Sometimes in order to find one of these Nerves, players will have to
solve typical 3D platformer puzzles, like moving a colored block to a certain
location or figuring out the right pattern of tiles to press.

These NERVE robots remind me of those wacky monkeys from Ape
Escape, only more docile. Most of them just stay in place waiting to be
scared. After you’ve collected enough "ooze" to scare the NERVES,
the game turns into a button mashing exercise. In order to scare that little
sucker, players will need to press buttons according to the onscreen cues. It’s
kind of like Parappa, only without the rapping Kung-Fu Onion. When the
first 5 NERVES are scared away in each stage, a bronze medal is earned. Fulfilling,
ain’t it? But of course you’ll have to do more to earn gold.

A short clip from the movie is played back every time you win a bronze. Never
mind the fact that the game’s premise is completely different from the movie,
or the fact that these clips seem pretty haphazardly clipped and edited. They’re
still fun to watch, but games like this must stop relying on movie captured
FMVs to make the game worth playing. 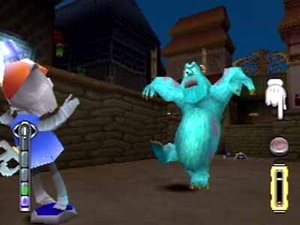 The
graphics in Monsters Inc. are a monster in and of themselves. The dull
textures have a way of slightly shifting or warping while you’re walking about,
distant backgrounds are flatly shaded and there are noticeable clipping errors,
such as Sully’s head peeking through trees or the corners of objects. Modeling
for the characters is supremely blocky and even seems to lack the right color
values.

The only noteworthy quality is the animation. Perhaps the frames of animation
were rotoscoped right from Pixar’s work, since Sully’s bounding run and the
manic motions of Mike are right on.

Musically, the game can’t get any more generic. Included are jazzy tracks
that have absolutely nothing to do with the movie. At least the voices sound
decent enough, with all the “Graahs” and “Booga Boogas” you could possibly stand.

I think that these movie-based video games should try to extend the universe
of the movie somehow. The Emperor’s New Groove
had an added cleverness that enriched the game. Why couldn’t they add some more
of that movie atmosphere to the game? In a movie all about monsters, only 4
monsters are present here. Even the dominant enemies end up being toys (perhaps
they are angry that Toy Story 3 isn’t being worked on). And on top of
that, my two favorite monsters from the movie, George and the Abominable Snowman,
are woefully expelled. Maybe they made the game from early press releases of
the movie.

And the operative word here is "early," as in released too early.
While the timing is obviously crucial, Monsters Inc. really should have
stayed in the oven a little longer to clean up the graphics and maybe add a
bit more to the gameplay. The developers seem sort of confined by the movie’s
release.

But for all of that, Monsters Inc.: Scream Team turns out to be fine
for its intended audience. Simple gameplay with familiar heroes is enough to
keep the little ones occupied for a while. Just don’t expect anyone over the
age of six to go ga-ga over it. 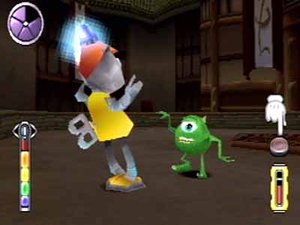 Do you agree with the list?
Originals 1 month ago