The 1970’s: Disco is at the top of the charts, nobody is laughing at the Bee
Gee’s yet, and bell bottoms become popular for the first time (shudder). It’s
the decade of Afros, leisure suits, and large levitating cars with really big
weapons. That’s right, Slick, the head honcho at the OMAR oil company, has sent
back a legion of his worst baddies from 2010 to take over the US oil industry
in the ’70s. The Vigilante 8 series has taken a page from “Back to the
Future” in their most recent installation: Vigilante 8 Second Offense.
Although the graphics are a bit below par, most everything else, including sound
and gameplay, is very cool.

The
gameplay will be familiar to anyone who has ever played a car combat game: go
into a big arena with loads of other cars, find weapons of varying power and size,
and blow the crap out of anything that moves (and some things that don’t). Meanwhile,
you can pick up all sorts of power-ups and do various violent things to the landscape.

The game itself is flat-out fun. You have lots of wacky cars to choose from
including three guys on a bike (in tights), and a moon rover (perhaps another
failed NASA mission?). When you first get out in the arena, you’ll realize that
almost everything is blow-uppable [That’s not a real word! ~Ed], including
palm trees, police cars, and a drive-in movie theater. In addition to this, you
can do lots of things with the various buildings in the level. You can launch
yourself off of one of the launch pads at Cape Canaveral, or hook on to a ski
lift to lug yourself to the top of the Utah mountains.

There are a multitude of power-ups to give you the edge on your opponents.
The coolest of these are the wheel modifications. You can grab things which will
change your wheels into different configurations. For example, in the Utah level,
you can get snow tires and skis as your wheels. In levels with water, you get
some floaties [Floaties? That’s not a real word either. Don’t make me blow
up your car. ~Ed] and a propeller, and you can even get a levitating wheel
mod (Marty McFly, eat your heart out!). There are also shield power-ups and such,
not to mention a truckload of different types of secondary weapons, including
(but not limited to) flame throwers, mines, homing missiles, mortars, and rockets.
Although not quite as varied as some other games, it’s enough to keep the game
entertaining. 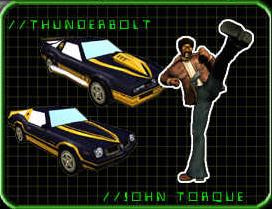 You’ll
be happy to hear that the physics are pretty sharp. Everything, including your
car’s suspension feels realistic. There are a few problems with flipping over.
When you do, it’s random whether you flip back over, or move forward, or one of
several other things. Fortunately, you don’t flip over very often.

Sound is well done, but not outstanding. There are the standard set of things
going boom, crash, snap, crackle, and pop. The music is another story. Most of
the selections are great, from funk tunes (oh yeah!), to a rock version of Toccata
and Fugue in D minor (y’know, the Dracula theme).

The quest mode is good also, with separate quests for all the main characters
– lots of one player game for when your friends aren’t over.

Of course, there are problems with this game, too. First off, it isn’t as breakthrough a game as the first one. Most things have stayed the same. Particularly, there aren’t many new weapons, and the graphics are pretty similar to the original.

The graphics themselves are a problem. Although things are well animated in
general, the graphics are pretty grainy, with lots of pop-up everywhere. When
you run into buildings, your car can sometimes stick right through the wall. Also,
some things can look really bad from a distance, like the donut on the Super Donut
building. Of course, Twisted Metal has its share of graphical problems,
but this version of Vigi 8 just seemed a little rougher than the original.
Graphically, it looks like we’ve hit a dead end until car combat makes its way
to the Dreamcast or Playstation 2.

Control can also be a problem. When you use one of the light vehicles, you
can turn too fast to actually control your vehicle well. And with larger cars,
it’s really hard to turn the dang things. Although this is sort of realistic,
it goes a little too far to be playable.

So in the end, Vigi 8: 2nd Offense is a very fun game, but with a host
of little problems. On the other hand, it’s still superior to anything from the
Twisted Metal series, with better physics and much larger arenas. If you
loved the first game, or are looking for some auto combat without Rob Zombie,
this one is definitely worth a look, with it’s new levels, cars, and power-ups.
Plus, it will make you into a better driver. That old lady in the Volvo better
get outta my way, I’m on a mission. 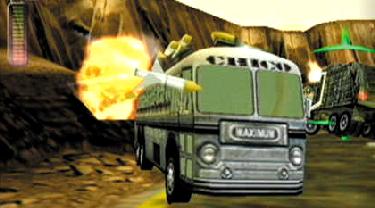 Bigger and best.
Tech 6 days ago
6

Don't forget about these incredible games.
Originals 2 months ago
6