Activision’s version of The Weakest Link is a realistic simulation of the
popular game show hosted by the warm, jovial Anne Robinson. You’ve stared at the
idiot box, screaming at the morons who flub the answers to questions that any
crack-addled monkey would get right, and now thanks to Activision, you
can be that moron! But honestly, if you don’t like the TV show, you would have
to be a crack-addled monkey to add this to your collection.

Just like the show, you compete against six other players answering questions
of varying difficulty and subject matter in hopes of raising the pot of money.
The final amount of money banked by the team at the end of the round goes towards
the final prize money and at the end of every round players must vote to eject
the player they think is the “weakest link," or as the lovely Miss Robinson
would say “Theweakestlinkgooodbye!" The last one standing, of course, is
the winner.

Faithfully re-created in the home version are the uncomfortable pauses, the
hemming and hawing, and the staring into space that contestants are prone to
do when faced with a tricky question. While amusing at first, it becomes annoying
when you realize the clock is ticking. The game is exactly like the television
show in every respect. After players vote, the show’s announcer tells the viewers
who the strongest and weakest links are, who banked the most, and actually speculates
on whether or not those factors were considered by the players – exactly the
same as the show. We even get the same Logan’s Run set design, the same
camera pans, and the same annoying five-note soundtrack.

Find the load times annoying? Just call ’em “commercial breaks.” Like the
kind of breaks where you use the bathroom, grab a snack, and repaint the house.
Not really sure why the loading is bad, though, since there isn’t a whole helluva
lot going on.

This home translation is so complete it even has a player-controlled laugh
track. Think I’m joking? Just tap R1. And what would The Weakest Link
be without a virtual version of everyone’s favorite interrogator…umm…er….I
mean hostess, Anne Robinson? 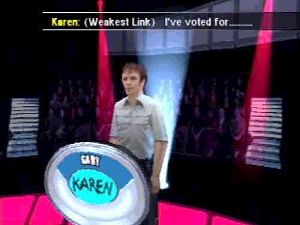 Anne
has got to be this game’s biggest hook. The cold British woman with the steely
gaze and dry, mocking humor will alternately embarrass and enrage you. Look,
I just don’t see why everyone’s all bent out of shape over this lady. Sure she’s
rude, but it’s not like this show is on HBO. My high school chemistry teacher,
Sister Theresa, would make Anne cry. The insults she uses in the game are generally
character specific, but they’ll start to repeat themselves all too soon. That’s
too bad since they’re the one of the few things this game has going for it.

If you’re interested, you can go into the options screen and customize the
game by changing the difficulty of the questions or frequency of questions on
certain subjects. If history questions make you feel dumb, you can lower the
number of history questions and skew the game towards sports if you like. You
can even set the game so you can “bank” on anyone else’s turn.

Surprisingly, the computer opponents appear to have some semblance of AI.
This became apparent when, after playing a flawless round, I was voted off by
my computer controlled “teammates.” When my simulated opponent was asked why
he chose to vote against me, he acknowledged that I was the superior player
and he had a better shot at beating the other guy. I would have laughed had
I not been so pissed about losing to the computer.

The graphics are… well, graphics. There’s really not a lot there to animate.
There’s a stationary monochromatic woman on a podium in a semi-circular room,
who occasionally turns to faces other stationary beings who periodically fidget.
Looks like the show to me.

Though this electronic reproduction of the show retains the look and feel
of the real thing, it’s just not very fun. If you don’t have a large group of
actual people to play with, getting voted off by the computer lackeys will quickly
get on your nerves. I actually had more fun seeing just how far the game disc
would fly.

The Weakest Link is ultimately one of those games you play with a non-gamer.
You know, those weirdos who sit for hours in front of the TV and passively watch
what’s being broadcast. We’ve just got to help those missing links evolve a
little. 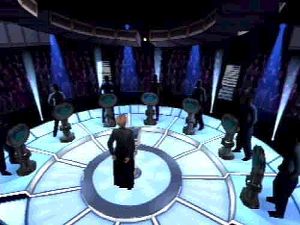 Laugh track!!! Decent reproduction ...for what it is which is a game show... with no bikini models. Long load times.
Friday

Laugh track!!! Decent reproduction ...for what it is which is a game show... with no bikini models. Long load times.
February 10

Laugh track!!! Decent reproduction ...for what it is which is a game show... with no bikini models. Long load times.
February 21

Laugh track!!! Decent reproduction ...for what it is which is a game show... with no bikini models. Long load times.
February 24

Wizards of the Coast Statement on OGL 1.1 Controversy Gets Ratioed on Twitter