Stupid AI is as stupid AI does.

Adding to 989’s list of anticipated titles that fail to deliver is NCAA
Gamebreaker 2000. This is an easy to pick up and play game, that, while
fun for a while, just can’t compare to the more accurate and complete NCAA
Football 2000 from EA Sports.

To be fair, NCAA Gamebreaker 2000 is fun to play. The controls are
easy, as is the gameplay. The graphics are pretty, and the sounds of the stadiums
and the announcer are exciting. As you play further, however, all of the elements
that make the game attractive at first begin to show their faults and eventually
hurt the replay value. NCAA Gamebreaker 2000 is like one-dollar Chinese
food: it looks good, so you try it, but an hour later you’ll be hungry for something
else.

Fantasy league is a clever addition to this football title, letting you designate
point values (1-5) for various actions (30 yard passes, interceptions, QB sacks,
etc.). As cool as this option is, it isn’t exploited to the full extent. For
example, more actions could be added to the special point scoring, such as running
a kickoff for a touchdown or turning the ball over by performing an onside kick.
Also, the Fantasy league should be integrated into the season, instead of being
only an option in Exhibition games. However, this is an interesting new addition
to video game football and should be applauded.

Gamebreaker 2000 is essentially an arcade-style football game. There
is very little sim realism to get in the way of good old-fashioned video game
football action. In this sense, football gaming beginners can get into this
game just as easily as experts. In fact, beginners probably have a good shot
at beating the experts in head to head matches. But where this is an asset in
a game like NFL Blitz, it’s a hindrance here.

Why? Well, a majority of players run with the agility and strength of Olympic
sprinters and never tire, which means you rarely (if never) have to revise your
play strategy. Though many have different ability attributes, their differences
aren’t significant enough to affect general play.

Unlike the realistic player model scaling in NCAA Football 2000, Gamebreaker
2000 contains no variation in player size and shape. Blockers look and behave
like they’re lean wide receivers. This brings up another fault in the design
of Gamebreaker 2000 – players in the game can be controlled too precisely.
Commanding heavier and slower players versus commanding the quick ones (such
as tight ends and running backs) feels nearly identical.

On top of this, certain physics are screwed up. The balls have too much bounce,
and the dive move for players is faulty. Instead of diving forward, the player
will appear to trip and fall straight down, ignoring the fact that his momentum
is carrying him forward. Guess he had one too many. 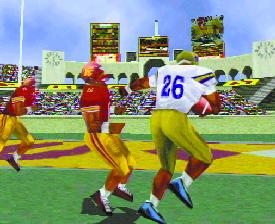 Though unrealistic,
control is the area in which Gamebreaker 2000 is more intuitive than
Football 2000. Gamers can pick sim control (meaning standard), or total
control, where different button combinations can be used to perform more precise
plays. Unique actions include diving over piles, shoulder charging, high stepping,
and juking. This control feature is most useful in human vs. human matches,
because taunting another person after a cool juke is a lot more fun than taunting
your Playstation. And like other football titles, up to 8 players can compete
with a multi-tap.

But damnit, just when you start to enjoy parts of Gamebreaker 2000,
its faults rear their ugly heads. The AI is incredibly stupid. The game is a
cinch to beat with most college teams, even on the hardest level settings. Computer
players don’t anticipate what plays you’re going to perform, so you can literally
use the same play through an entire game, and if the computer doesn’t stop you
the first time you use it, they never will. I believe that in one game, I used
a play called ‘Toss Left’ non-stop, and the final score was me 89, them 54.

Like many other arcade type games, Gamebreaker 2000 always favors the
offense. It’s nearly impossible to stop running plays, a fact that is worsened
by the insane ability of most players to break tackles. Shaking off 3 defenders
by simply tapping Circle is common.

This insane cheapness is made incredibly apparent once you play against a human
player. Passes to receivers mobbed by 3 defensive men are completed a majority
of the time. You can grab most passes simply by jumping, even in the tightest
situations. Add this to the AI problems and playing againts the computer becomes
mundane at best.

With help from UCLA coach Bob Toledo, 989 Sports has created an entirely different
play book from other football games. This means that there are none of the classic
shotgun plays that gamers love. There is no ‘Deep Outs,’ no ‘QB Waggle,’ no
‘Hail Mary’…oh the humanity! 989 would have been wiser to make radical changes
in the gameplay department, not in the play book. By changing the plays, 989
Sports is again gearing the game away from football fans and more towards casual
gamers.

Unfortunately, the depth of the game is hampered by the poor recruiting, which
is merely an afterthought in the game. You pick a certain number of players
available to you, and hope that the good ones will find their way onto your
roster. The best sim feature in the game is the ability to save seniors on your
memory card and transport them into the draft for the 989 Sports’ game NFL
Gameday 2000. But, I wonder how many gamers will want to pay 40 more dollars
for another football title made by 989 Sports?

NCAA Gamebreaker 2000 is an arcade football game packaged in a sim
wrapping. It tries hard to look realistic, but fails when it comes to actual
gameplay. Good for a rental, but true football fans will want to look towards
EA’s NCAA Football 2000. 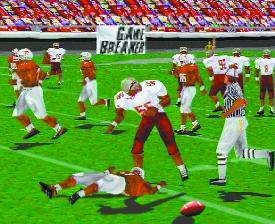 Good control, easy to get into Some interesting additions Too much arcade influence Very cheap, always favoring the offense Dumb…
Friday

Good control, easy to get into Some interesting additions Too much arcade influence Very cheap, always favoring the offense Dumb…
February 10

Good control, easy to get into Some interesting additions Too much arcade influence Very cheap, always favoring the offense Dumb…
February 21

Good control, easy to get into Some interesting additions Too much arcade influence Very cheap, always favoring the offense Dumb…
February 24

Guides Good control, easy to get into Some interesting additions Too much arcade influence Very cheap, always favoring the offense…
8 months ago

Do you wanna build a snowman?
News 5 days ago