X-Games Pro Boarder is a prime example of a game that coulda’, woulda’,
shoulda’. The programmers of Pro Boarder started out with a fantastic idea
– let’s make a snowboarding game for snowboarders. It’ll have everything that
real snowboarders dig: real professional snowboarders, real boards, and a kick-ass
soundtrack to boot. And for an extra bonus, toss in a sponsorship by the high
and mighty king of all snowboarding competitions, the ESPN X-Games. Sounds like
an unstoppable product, right?

Well, while all
that sounds pretty fine and dandy, I’m here to tell you that the folks at ESPN
Digital Games forgot one super-crucial element: it’s a video game. With all
its nifty bells and whistles, Pro Boarder just ain’t fun to play.

The most basic and fundamental problem with Pro Boarder is its gameplay. We all know that a game is nothing without solid gameplay, and I’m sorry to say that Pro Boarder‘s gameplay is the worst this side of the Mississippi. Say you’re on the Big Air course and you want to do a more-or-less basic move like a 360 nosegrab. By the time you land it, you’ll have completed 8-10 button pushes. I don’t know about you, but Tekken-style button combinations in a snowboarding game aren’t my idea of a good time. In fact, just getting down the mountain presents a problem. Do I “quick ollie” here? Why am I slowing down? Why do I keep hitting the trees? These are just a few of the questions your confusion will inspire while playing Pro Boarder.

As far as graphics go, Pro Boarder looks great on the surface. A glance at the screen will have you drooling over the majestic landscapes and smooth, freshly-dropped powder. With a quick touch of the D-Pad, however, you’ll realize that you’ve been duped. Although everything looks pretty good while the game’s paused, it’s a whole new game once you’re moving. First off, the frame-rate is too slow – it’s almost as if they threw out every other frame to speed the game up. The result is an almost surreal experience; although you can see your boarder flying wildly down the hill, it just doesn’t feel like he’s on it.

Also, about half-way down the mountain you’ll realize that the terrain doesn’t change much. Sure, you can go out of bounds to find a short cut, but once you’re there, it looks exactly like the regular path. And yes, the texture map they use to create the soft powder looks great, but really, that’s the only kind of snow you’re going to see in the entire game. Toss in some generic surfer dude/chick voices and cheesy snow sound effects and you get the idea. Blah, blah blah. 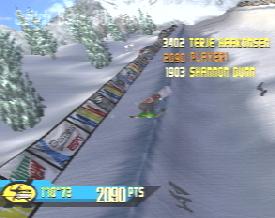 My last gripe about
this game has to do with variety. Had this game been released a year ago, I might
have said that it was competitive in this category. It’s got two half-pipes, two
big-air courses, a slopestyle course, a boarder X course, two free-ride courses,
and even an X Games-style stadium course. Sounds nice, huh? That is, unless you’ve
played Cool Boarders 3. Not only does Cool
Boarders 3 have 25 (!) more courses than Pro Boarder, but most of them
are far more interesting to explore. On top of that, you have to complete the
super-hard circuit mode before you get to ride on four of the tracks. How did
ESPN Digital Games use up the rest of the disc space? Did I mention the long,
FMV advertisements for a couple of this season’s snowboarding videos? Well, there
you have it.

In spite of all this evil, however, there is one thing worth mentioning. What I love about Pro Boarder is that it has got a ton of cool, authentic snowboarding stuff. I’m talking 8 real-life snowboard professionals (including the hot-as-ever Shannon Dunn), each with their own respective sponsors and real-life snowboards (everything from K2 to Sims, 32 in all). Not only that, but ESPN went all out and recruited a kick-ass collection of bands for the soundtrack. There’s the Foo Fighters, NoFX, Pennywise, Rancid, Voodoo Glow Skulls and seven other bands in the game; every single one of the songs will make you thank God almighty that you’re not hearing the cheesy thrash metal featured in other, ahem, snowboard games. And if the game itself doesn’t hold your attention, toss it in your audio CD player and you’ve got a great compilation CD. Very classy.

That said, great tunes don’t change the fact that Pro Boarder is at heart a dissapointing snowboarding game. It started out as the little snowboard game that could, and finally crumbled under the weight of it’s own ambition. Perhaps ESPN Games should look into what people really want from a game–intense, realistic gameplay and variety.

No one can hear you scream.
Games 4 days ago
6