During the past few years, as MMOs have evolved to become less time consuming, some of their charm has been lost. What was once a genre rich with presence and community has devolved into something that is centered around quick reward loops.

Given the prevalence of casual theme park style MMOs, it would appear that the classic design that veterans once loved is never to be seen again. Thankfully, that didn’t deter German developer Sandbox Interactive from trying to make something classically inspired. And thus, we have Albion Online, one of 2017’s most compelling online experiences. 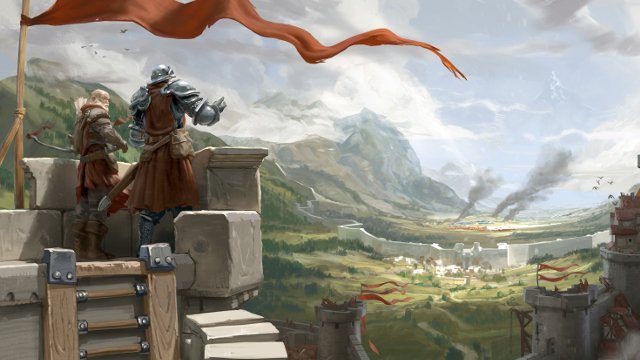 Set in a medieval fantasy world of swords, shields, and magic, Albion Online is thematically traditional. Its open-world features vast landscapes that range from snowy hilltops to humid jungles, rich with opportunity to acquire new equipment. Players can battle against one another, or turn their attention to farmable NPCs.

The ordinary qualities of Albion Online end there.

This is one of the first large-scale sandbox MMOs to release in quite some time, and it’s a true sandbox by design, not just by definition. Within minutes you’re let out into the world as if you just entered adulthood, free to progress toward the goal you’re most interested in with low barrier of entry.

“…it’s a true sandbox by design, not just by definition.”

This isn’t a game where the main objective for the playerbase is finding the least path of resistance to killing a new boss to incrementally increase the power of your character. Instead, its player-driven economy, PvP oriented world structure, and conquerable territory provide incredible content diversity that can only be compared to EVE Online in the current landscape.

For many players this comes across as overwhelming due to the game’s lack of a sufficient tutorial. There are a lot of systems and mechanics to learn, and most of them require a trip to YouTube or the game’s official site to learn. This ultimately provides disadvantageous to the game’s goal of growing the largest player base possible, but does serve as a gatekeeper of sorts that deters players who don’t have a vested interest in sandbox games from going any further. 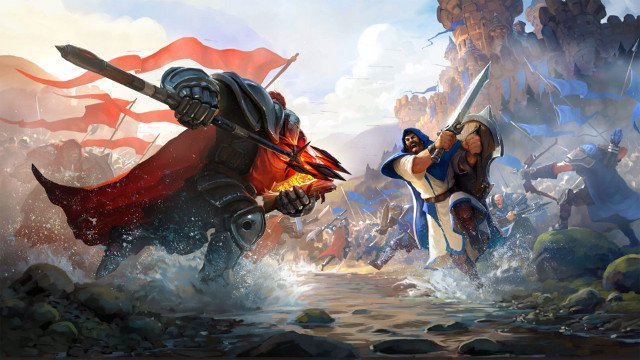 Combat in Albion Online is most similar to MOBAs such as League of Legends or Dota 2. Played from a top-down camera, you’re able to guide your character around in a 3D environment.

Interactions largely consist of clicking on things, but combat incorporates a small number of abilities that hit all the major notes, from AoEs with cooldowns to spammable attacks that combo into finishers. These abilities are defined by the type of weapon and armor you’ve equipped, allowing you to play your character in any way you desire without having to lock-into a certain style of play.

There is a large library of weapons in Albion Online, so there are inherently many ways to build your character. Generally speaking, this boils down to either using a melee build, a bow, or magic. Each of these play very differently from one another, and have their own strengths and weaknesses that integrate strategy into the battlefield.

The limited gameplay perspective is made far more interesting by The Destiny Board, a system that is a partial solution to the boredom of grinding to level cap in most MMOs. By completing a variety of objectives, you gain access to new items, whether it be craftable goods or equippable gear. It most feels like achievement hunting, with objectives that are generally broad and can be completed in a number of locations.

Once you’re working toward higher tier unlocks, things begin to slow down. Even then, at the very least you have access to endgame content to some degree, so you don’t feel like you have to invest dozens of hours of your time before you can partake in the main attractions. 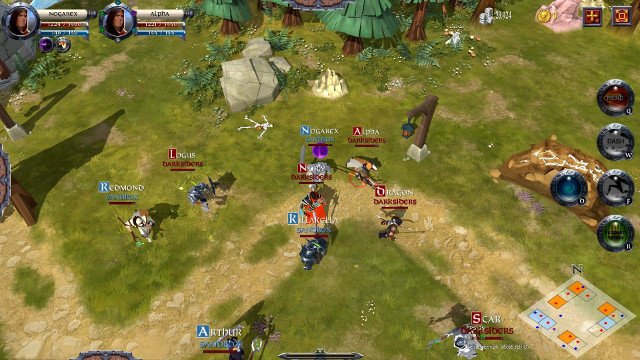 The core of Albion Online‘s game experience is centered around PvP. Though, this isn’t the sort of PvP that many MMO fans have become used to where you queue up for battlegrounds to endlessly grind for gear. What’s here is much more organic and unpredictable in nature.

As you set off into the world you’ll encounter four zone types: green, yellow, red, and black. Put most simply, these correlate to the security level of the zones, with green and yellow providing the most safety from being killed by other players. Red and black, on the other hand, are where only the most confident and prepared players should go as not only can players jump you, but you lose items upon death.

Griefing, politics, trolling, and acts of honor are commonly demonstrated on Albion Online‘s open battlefields. As you set off into a new area, you never quite know what you’re going to see, and given the game’s top-down view it’s challenging to steer away from danger when it presents itself.

This often results in frustrating deaths, but also memorable interactions. Not everyone you encounter is looking to take advantage of you, nor willing to bear the punishment of making a new enemy in such a free society. If nothing else, you should spend time making friends in-game so when you do encounter someone who wants to ruin your day, you’ll have people to back you up.

Due to the importance of territory, politics play a huge role in the metagame. Players who find themselves playing for any length of time usually end up deeply entrenched in the social environment of Albion Online, where they become familiar with other members of their community—something the MMO genre has been sorely lacking for many years.

Keep Calm and Hammer On 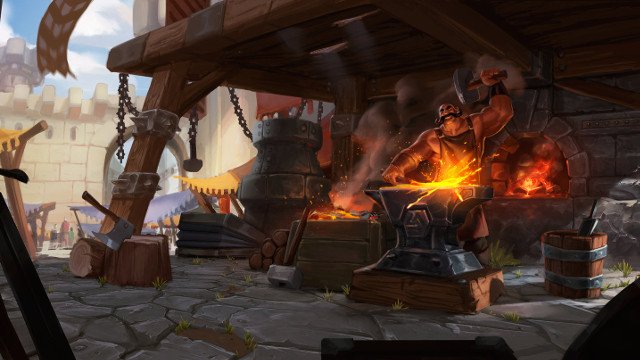 The player-driven economy bears similar importance to the structure of Albion Online. In this game, virtually every item you can obtain is crafted, even the highest tier equipment that only the most veteran players run around with. Given that players can drop their gear on death, there is high demand for a wide assortment of gear. This provides ample opportunity for players who enjoy playing with auction houses.

Players who don’t take interest in PvP often find themselves enjoying the crafting side of the game. Currency is extremely powerful, even for players who just want to deck out their own player island with well-furnished buildings. There’s a great sense of fulfillment that comes along with amassing a large bank account, knowing that you can use it in an impactful way.

The catch is that the most valuable materials are found in red and black zones. So, players who want the best return on investment will eventually need to find a way to power up their character, or roll with a group of friends. This angle on gathering is surprisingly rewarding, as it introduces risk as a factor.

Every player is provided access to gathering all types of materials, includes skinning animals, harvesting logs, and even mining for ore. With this, a player can participate in the full breadth of the market without having to make alternate characters or reinvest skill points. It’s common for guilds to actively hire crafting specialists to help support their war machine. 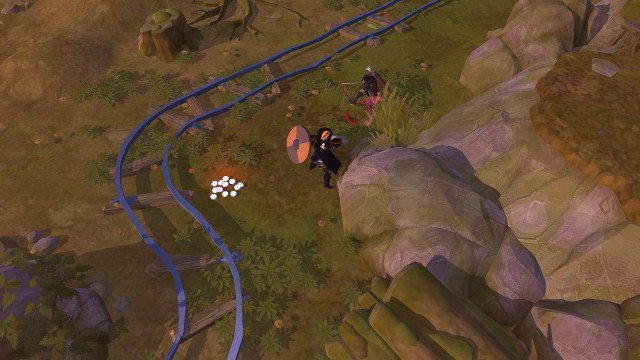 The Albion Online community has already benefited greatly from its multiplatform release. Available for tablets and PC, the social side of the game has thrived during release week, to a point where, despite it’s much smaller visibility compared to AAA MMOs, is similarly accruing server queues and overcrowding in cities.

Though, graphics suffer as a result. The world, its characters, and its UI is most similar to mobile games, rather than the PC MMOs that it directly competes with. It’s not that it isn’t pretty; at times the colorful and varied world catches the eye, but it’s rudimentary and generally unimpressive. At the very least the user experience is positive.

“The Albion Online community has already benefited greatly from its multiplatform release.”

The audio design is similarly flat. It’s difficult to hear the music, common sound effects such as when a player mounts a horse are far too loud, and combat effects are low quality. This ultimately plays a part in the game world being difficult to become immersed into, further drawing importance to the social aspects of the game.

As a final note, Albion Online requires a $30 fee up-front to play, but nothing beyond that. Players who want to shortcut to pay for expensive PvP battles and gain an edge over other players will feel compelled to shell out money for the game’s optional monthly fee, or even invest in gold that can be used to trade for valuable in-game currency. On this front, Albion Online‘s pay structure is designed in a way that is not consumer-friendly, and certainly doesn’t take inspiration from the best of its peers (i.e. Guild Wars 2).

At a time when the definition of the MMO genre has been challenged by the allure of mainstream success, Albion Online has arrived to remind us how deep and compelling massively online worlds can be. It might not have the lively gameplay of its peers, nor the visual spectacle, but it makes up for most of its shortcomings by prioritizing community and presence as vital elements of the game structure.

There’s nothing quite like Albion Online in the modern climate of MMOs, and frankly, it’s a breath of fresh sandbox air.