I have confession to make. I am 30 moons old with two kids, a full-time college
student, and not only do I game on my PC and Playstation, but I have a Gameboy
Color for use on the “holy throne.” I was made aware of Monster Rancher Battle
Card: Episode 2 for the Playstation because I own the GBC version, and I
can’t put that down either. Tecmo really has something here, and it spells addictive,
quality entertainment.

So what’s so great about MRBCE2, you ask? How about an interesting
story and addictive gameplay?

Your friend Colt has just had his birthday, and is old enough to become a card
“breeder.” Master Pabs, your sensei, gives him a “monster plate” on which he
can collect all of the monster cards he can. And his most prized gift comes
from you, the rarest card of all, the Phoenix. To quench his desire to see the
plate full, you loan him some of your cards, and at that instant Colt disappears,
magically transported to “Monster Paradise.” Now it is up to you to save Colt
by collecting at least one of each monster card. Let the games begin!

This is essentailly a card game featuring four types of cards. First there
are Monster Cards, which act as your front line in battle. Hit points and monster
lineage are shown on these. Skill cards are used for the actual battles; there
are both attack and defense skills, which can only be used with their respective
monster card.

There are also two more supporting cards. One type allows the breeder to assist
in the battle by either attacking, healing, or casting area effect spells. The
last type of support card can be used by any attacking monster on your team,
and they vary from attacks to special moves.

The game consists of turn-based battles. Each player starts with three monster
cards and fifty skill cards. Players alternate playing skill cards to wear down
the HP of their opponent’s monster cards or deplete their rival’s skill card
supply. Each side must maintain five skill cards in their hand; if you cannot
make a five-card hand you lose the battle. Each move costs a certain amount
of Guts (points that are gained by turning in unplayed skill cards). So it’s
a constant decision to either save your skill cards for the next turn, or sacrifice
them for guts.

MRBCE2 lets you use your own CD’s (music or games) to create new cards
in the classic Monster Rancher tradition. It’s a good thing I like obscure
music, because if the game has never heard the disc before, you get some super
rare cards. 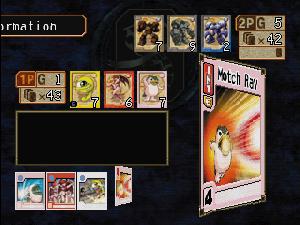 The
art is clean and exciting, but the animations for each move are minimal and
tend to bog the game down with load times. I turned them off after a couple
of hours to speed up the gameplay. Still, the animations look really cool.

RPG fans that enjoy turn-based fighting but would rather do without all of
that seemingly pointless wandering around will love the menu driven gameplay.
To progress in the game and to collect more cards, you participate in battles.
There are occasional tournaments where you can win some pretty powerful cards,
and the championship tournament is the only place to earn the infamous Phoenix
card. But for the most part, you fight in independent challenges with other
clubs. Battles are non-stop, with a little storyline thrown in between to keep
things flowing.

There are no puzzles to solve, special items (other than cards) to collect,
or areas to explore. Each stop on the world map is just another arena for battle,
which really helps with the pace of the game. However, it also means that there
isn’t really more to the game past the card battles. Most RPG fans will find
this somewhat dry and boring.

The biggest flaw in MRBCE2 is the multiplayer, which just plain sucks.
It’s played in a tournament style, with 1-8 teams of 4 breeders, each player
controlling a team. The problem is that the computer randomly generates three
of the battles for each team, so each player only actually plays one time. This
mean you’ll spend some time sitting there watching menus scroll by announcing
the winner of every bout. It’s just not very interactive and not very fun.

At any rate, this game is so freakin’ addictive that I wish I had never started
playing. If you have free time in your life that you feel needs to be filled
with obsessing on a game, then check this one out. But don’t count on multiplayer
to provide much entertainment because it won’t. 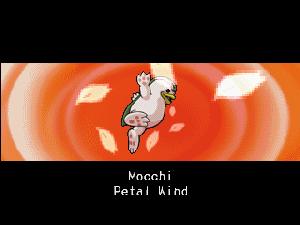