If there’s any purpose for virtual pets — this is it. Sure they’re cute and adorable,
but is that really going to hold your interest for very long? They don’t fetch
papers for you. They don’t draw attention from chicks. So they might as well duke
it out for glory. That’s what I say at least.

You
might think that this game is similar in premise to Pokemon — and you’d
be right. I’m not sure which came around first, but I’ll tell you that this is
the only game on the Playstation that will satisfy your virtual pet battling needs.
No children, there’s no Pokemon game for Playstation.

The purpose of the game is to carefully raise your monsters to become champion
fighters and to indirectly become a master trainer. You’ll raise your monsters
by feeding them, playing with them, training them and entering them in tournaments.
As they rise through the ranks in the tournaments, you’ll gain fame and money
that is necessary to provide for the monsters. Monster Rancher 2 provides
hundreds of different monsters to use (how many hundreds I don’t know), making
the replay value tremendous for those interested.

When you first start out as a meek, inexperienced trainer, you’ll get a free
monster from the monster shop. After raising this first creature and gaining some
experience, you’ll be able to buy new monsters, breed them, or even create new
ones from your own CDs. That’s right, there’s an option in the game that will
create new monsters for you by reading data from any of your music, games, or
computer CDs. For a list of some of the monsters you can get from particulat cd’s,
check the GR cheats section. Although doing so is a bit tedious, it’s an interesting
option that you’ll definitely want to try, and the only way to get some of the
rare monsters.

Training your monster is done by running them through pre-designed training activities. You can make your monster swim, run, pull things, dodge things, meditate, and much more in order to raise his/her attributes. Attributes include power, speed, intelligence, etc.. Along with raising attributes, your monster will also learn new attacks. You also have the option of sending your monster to special training camps which are expensive, but greatly increase their skill.

Raising your monster carefully is vital to their success in combat. You have
to choose the correct foods to feed them, how stern you should be with them if
they fail, and how much they should be rewarded for being good. The best thing
is to maintain a careful balance between being harsh and a being a pushover. If
you’re too nice, your monsters won’t work hard. And if you’re too harsh, they
might run away or just plain die. 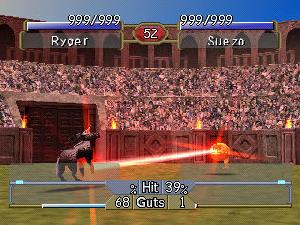 Combat
in Monster Rancher is mostly done automatically by your monster, but you
can choose to lend a helping hand. If you do so, you’ll be able to provide advice
during a battle that your monster will usually take. Basically two monsters are
put in a ring and they go back and forth performing their attacks on one another.
There is a two-player mode in Monster Rancher that allows you to play your
monsters against your friend’s monsters. You can also import your monsters from
the original Monster Rancher game and put them into the ring.

Monster Rancher 2 is a decent looking game, but it sure isn’t using
the Playstation’s full graphical capabilities. The graphics are cute and simple,
reminiscent of Pokemon or Super
Mario 64. Although the game uses relatively simple 3D graphics, there are
several graphical problems including camera clipping and polygon dropout. The
problems don’t ruin the game, but overall, Monster Rancher 2 could have
looked much better.

Depth is certainly the strong point of this game. With hundreds of monsters,
all sorts of ways to train them, and special side adventure games to play, you’ll
pretty much never be done with Monster Rancher 2. Don’t forget you can
also sit around all day plugging in your entire music CD collection to see what
new monsters you can find. If you’re looking for a game that’ll keep your kids
busy- this is it.

Overall, Monster Rancher 2 offers a lot for what it is- a children’s
game where you raise and battle monsters. I found it entertaining for a while
but I soon tired its repetitive nature. But then again, you might enjoy raising
virtual pets. The only major flaw in the game is its own premise- I believe that
a virtual pet game similar to the popular Pokemon on Gameboy would be more
interesting because you get to raise your monsters while exploring and solving
puzzles. In Monster Rancher 2 you’re confined to your ranch most the time,
pressing buttons in order to raise your monster’s statistics. If you’re interested
in playing with strange little monsters, then this is your best choice. Otherwise,
leave it to your little brothers and sisters and check out the numerous Playstation
games that are suitable for adults.

It's finally falling this May.
News 6 days ago