Skyrim VR Review – A Taste of Things to Come

One of VR’s hardest sells is that it hasn’t had a killer app yet. No experience is a “console seller.” There’s some great games, don’t get me wrong, but there’s no Breath of the Wilds, no Uncharteds, nothing of the length and breadth that makes any HMD a “must-have” accessory.

Even though it has the weakest tech, having the brunt of Sony’s marketing behind it makes PSVR the most likely candidate to break into the mainstream. When Bethesda announced Skyrim VR for the platform, I was excited. VR games typically lack staying power, but Skyrim has over one hundred hours of things to do and see. Nothing is more immersive in video gaming than a VR game that gets things right, so for a title this huge to make the transition is mindblowing. Unfortunately, Skyrim VR is held back by another aspect that makes virtual reality a hard sell: clunkiness.

Yes, It’s All of Skyrim 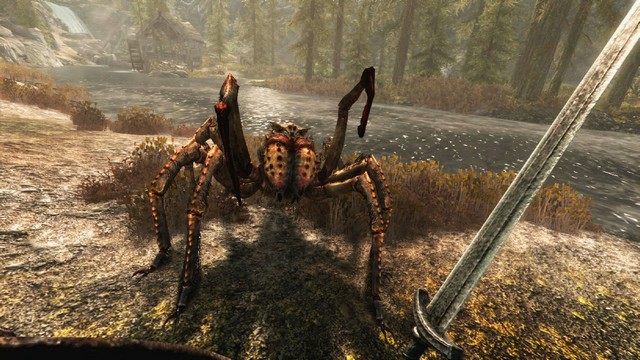 When you hear about Skyrim VR for the PSVR, you probably figure, “Oh, I wonder what part of the game they adapted.” A lot of “name brand” VR experiences are just microcosms of a more substantial work. I assure you, Skyrim VR isn’t. Every square inch of the original release and its three expansions are here, and you can explore all of it. This translates to the biggest VR world I know of yet, and even though it’s technically just a port, it’s like a whole new experience through the PSVR.

Instead of writing the fourth or fifth full review of The Elder Scrolls V: Skyrim for GameRevolution, I’ll skim over a lot of the stuff that still applies to the PSVR version. First, the story, the weapons, the items, and everything else is the same as previous versions of the game. There’s no added content for the PSVR. If you liked the story before, it’s the same, if you didn’t, it hasn’t changed.

The visuals are somewhere between the PS3 and PS4 versions. You’re going to notice some screen-dooring with the PSVR, and the textures aren’t exactly the best. That’s just a sacrifice you have to make to play in VR. You have two ways to control the game. You can use the Dualshock 4 and play it in the same fashion as you do the non-VR version of Skyrim, or you can use the PS Move controllers.

It’s Skyrim, But You Can Touch Things

With the Dualshock 4, you really need to have a strong stomach. Controlling your character with the analog sticks makes for a great way to lose weight, and I just couldn’t handle it. The Move controllers allow easy access to a teleportation system that makes movement in VR a lot less nauseating and will enable you to turn in little increments that will help even the more VR sickness prone individual enjoy the game. There’s also a host of sliders in the options menu that lets you dial in on the perfect balance between being comfortable and having functional and fun controls.

The Move controls also afford you an opportunity actually to reach out and touch the world of Skyrim. You can fight with sword and shield by actually moving the controllers in a pantomime of combat. If you use a bow, you’ll need to notch your arrow, pull back, and aim before you fire. When it comes down to it, you’re just as well off flailing your weapon at an enemy as you are trying to fight them the “right” way, but it’s a role-playing game, so just role-play like it matters and ignore that the motion controls are a little clunky.

Unfortunately, the motion controls suffer from an issue that isn’t so ignorable. The PSVR has the worst tracking of any of the major HMDs because of its use of the PS Camera for tracking. That means it’s super easy when you’re getting into the groove of fighting and looting your way through Skyrim for the system to lose track of the Move controllers and the PSVR. You have to stay in that relatively small sweet spot to be able to play, and it keeps you from getting too into the game. My best advice is to play sitting on a stool or an office chair. That way you can move your arms pretty freely and still spin around, but remain sitting in one spot so the camera can still see you.

It Also Has Skyrim’s Bugs 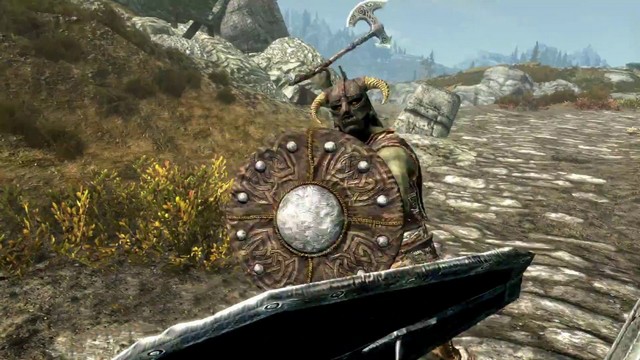 Of course, it wouldn’t be a Creation Engine game if there weren’t a ton of fun glitches to experience. You can expect to run into the same old problems that you have in every Skyrim version before this. Sometimes your character will randomly break boundaries. Sometimes your limbs will break boundaries or twist around all weird like. There will also be times that NPC pathfinding breaks. These problems don’t seem any worse in Skyrim VR, but they’re not any better either, though at this point it may be as good as it gets with the dated engine.

All in all, Skyrim VR may be the most significant experience on the PSVR yet. There are plenty of things that will remind you that this is a port of a game not for VR, like tight passages, and somewhat confusing motion controls. However, if this game is a prototype to see if epic AAA adventures have a place on VR, then it’s succeeded. If you can get past the muddled visuals, clunky controls, and limitations of the PSVR, then you have the full breadth of an Elder Scrolls game that you can play in VR.

Skyrim VR is a harbinger of things to come, and I do commend Bethesda on putting the work in to make this game fit VR. It would have been easy to make a few changes and make it a miserable game to play, but there are plenty of options to help make it as comfortable as possible to explore Skyrim on the PSVR. After playing, I can’t wait for the next few generations of virtual reality headsets to eliminate some of the issues that are holding games like this back. Maybe one day we’ll play an Elder Scrolls game that’s built for VR natively, but for now, Skyrim VR is the next best thing.

It's really all of Skyrim in VR. The new perspective makes it worth playing through the game again for the…
Friday

It's really all of Skyrim in VR. The new perspective makes it worth playing through the game again for the…
February 10

It's really all of Skyrim in VR. The new perspective makes it worth playing through the game again for the…
February 21

It's really all of Skyrim in VR. The new perspective makes it worth playing through the game again for the…
February 24

It's finally falling this May.
News 3 days ago