Dark Souls Remastered on the Nintendo Switch reignited my passion for From Software’s seminal title. This Switch port comes six months after the PS4 and Xbox One releases, and a little over seven years from the game’s original launch in September 2011, which was around the time I first fell in love with it. Dark Souls Remastered Switch faithfully recreates its signature fantastic gameplay, intricately layered world, and obfuscated storytelling that inspired a whole new style of RPG but it’s not without its flaws. 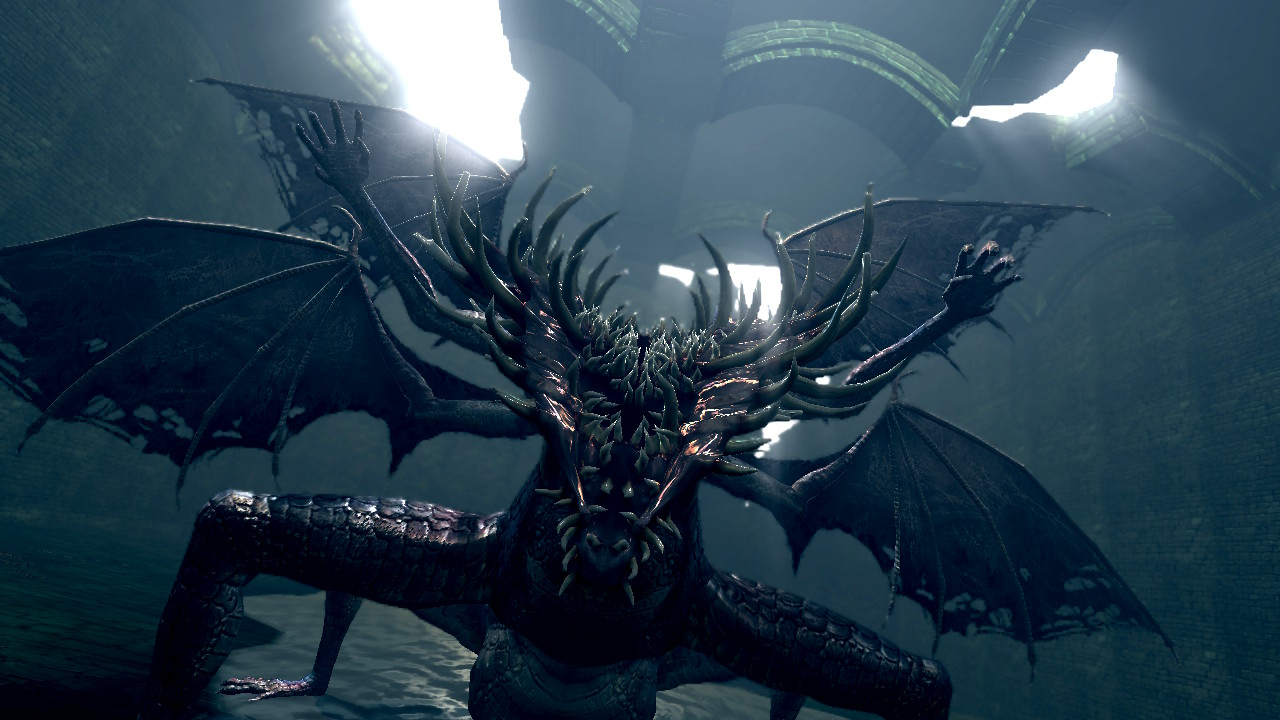 Virtuos Ltd. developed the Switch port of Dark Souls Remastered. Virtuos largely co-develops re-releases of older games, and have worked on games like L.A. Noire for Switch, Final Fantasy XII: The Zodiac Age on PS4 and PC, and XCOM: Enemy Unknown for iOS. Their projects are generally well received, and Dark Souls on Switch is no different.

Dark Souls Remastered on the Switch plays better than the game’s last-gen release, but at 30 frames per second, half that of the Remastered version on PS4 and Xbox One. Issues with notorious areas like Blighttown are largely resolved, with the frame rate no longer dipping into the low teens or worse. In handheld mode, the Switch performed admirably, but not without issues. Dark Souls would often drop frames and run in the mid-20s in more complex areas. A day-one patch made that slightly better, but it can still stutter at times.

Along with the handheld performance, certain visuals continue to tank the frame rate. Alpha effects such as fire and magic can hit the Switch hard in handheld and docked mode—particularly when these effects are close to the camera. But the game does look better when it’s docked, since it runs at 1080p as opposed to 720p in handheld mode. Dark Souls loads pretty quickly either way, which is important for a game whose tagline is “prepare to die.”

The Switch release also suffers from muddy, low quality audio. While there have always been some poor sound effects, they sound even worse here regardless of how the audio reached my ears. This was most noticeable through headphones, with everything from the game’s soundtrack to enemy audio showcasing mediocre mastering. Dark Souls was never a big game—clocking in under 4GB on the Switch—and it still sounds worse than the similarly-sized Prepare to Die version on PC. It’s possible Bandai Namco could patch in better audio, but it’s a shame that the game sounds like this in a remaster. 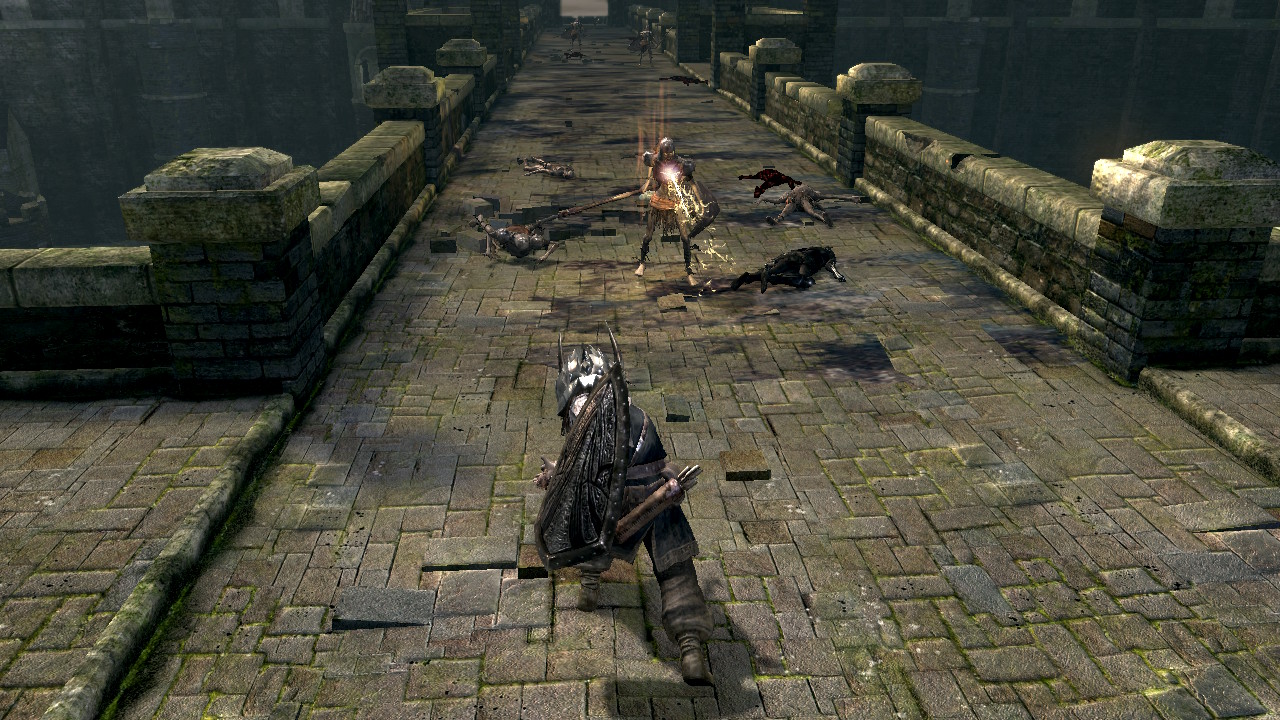 Dark Souls Remastered‘s multiplayer servers have yet to be turned on for the Switch. This means many of the game’s unique and integral systems have been unavailable for testing. A common sight when playing online should be messages laid by other players—sometimes helpful, other times deceitful, and some others just expressing relief that they beat a boss.

In my 35 or so hours playing for this review, the only messages I saw were those placed by the developer. Along with that, bloodstains of other players were missing—as were ghostly appearances of other players sitting at bonfires across the world. Invasion and jolly cooperation were unavailable, and as such many in-game covenants were useless without Dark Souls being online.

This also leaves another question unanswered: how will the game handle online play between Nintendo Switches? Oftentimes Dark Souls is full of laggy invaders, unresponsive cooperators, and cheaters. At the same time, Remastered ups the player count to a maximum of six from the previous four. The other versions of Remastered have been hammered for their mediocre anti-cheat, and rampant hacking online but we’ll have to wait and see how things shake out once the servers are online. 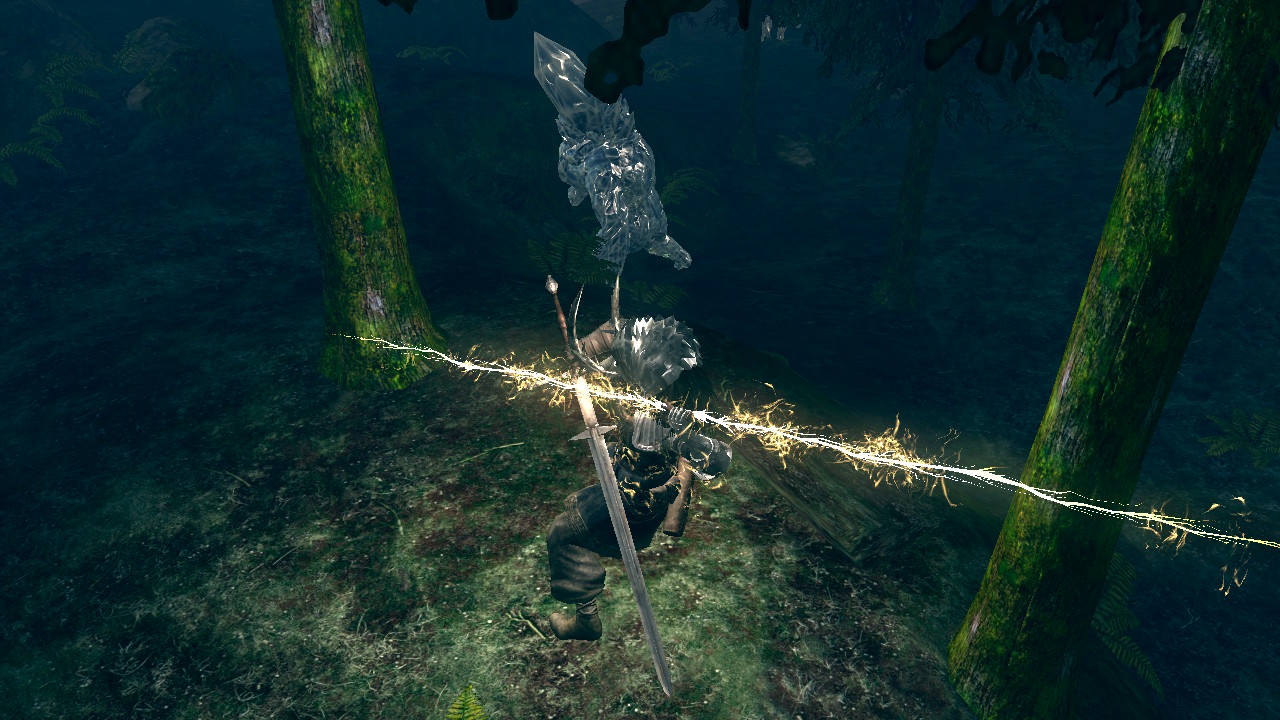 I adore Dark Souls. Including the Switch version, I’ve played well over 200 hours of the game, and have played through the rest of the franchise multiple times. Dark Souls is the worst game in the series, from a gameplay perspective. The game’s four-directional rolling feels archaic compared to Dark Souls 2 and beyond’s omni-directional approach. Other improvements like Dark Souls 3‘s Estus Flask split (one for health, one for mana) makes Dark Souls‘ approach to spells feel limiting. That’s not to say I think they should have rebuilt Dark Souls with those mechanics—it would have required completely redesigning enemies and encounters—but it feels less refined than later titles by From Software.

The first half of Dark Souls is where the game truly shines. Players are given a seemingly simple task—ring the Bell of Awakening—and are tossed into Lordran. This task splits as players learn there are two bells, and then they must venture into the world to find and ring them. Dark Souls‘ greatest achievement is its world design, a sprawling labyrinthine affair that connects and reconnects to itself as you progress. Dark Souls trusts players to find their own way, both within the world and in their character progression. This makes the game’s classless system feel daunting, and obtuse, but it is always flexible. 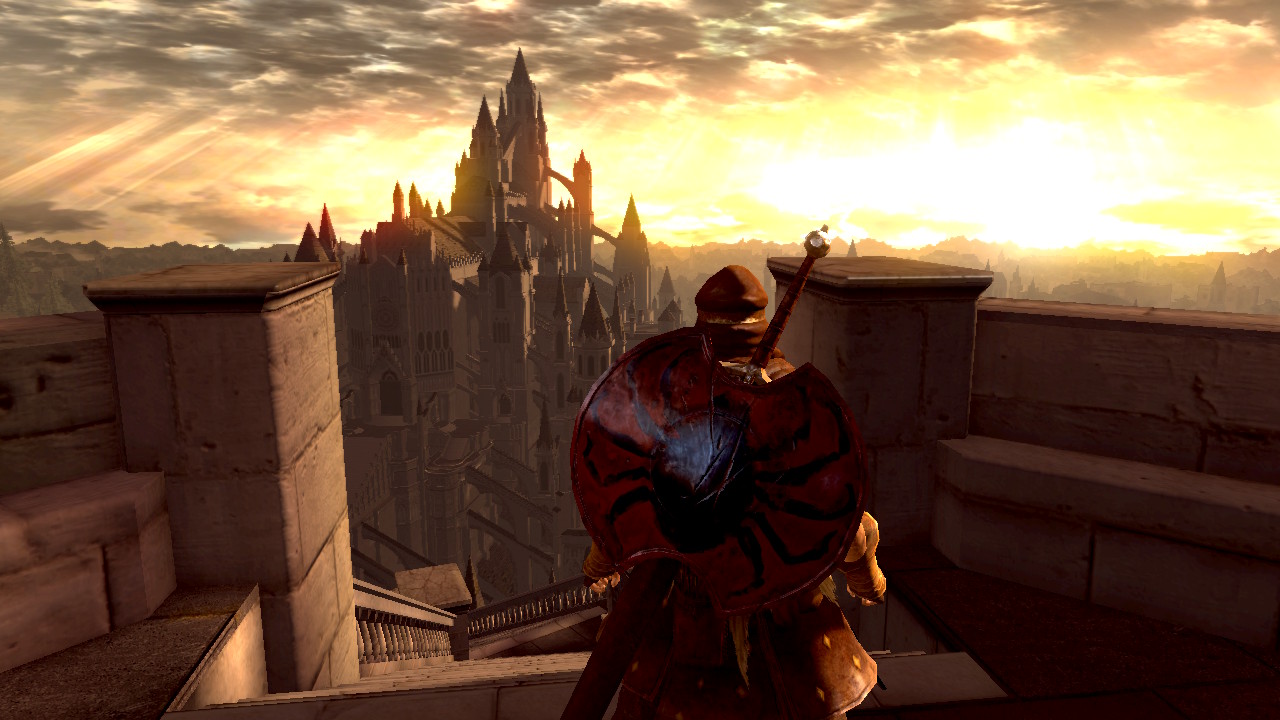 After players ring the two bells and fight through Sen’s Fortress they reach Anor Londo—home to the deities of Lordran. The trek thus far is finely crafted, and while difficult, feels fair. After retrieving the Lordvessel in Anor Londo, the game’s quality rapidly declines as players hunt down and defeat the four bosses that were detailed in the game’s opening cinematic.

Each boss resides deep in the depths of various areas of the game, with players retracing many steps they could have already made. Fast travel between bonfires becomes available, and much of the world’s terrain is bypassed in moments. These last four bosses—and their associated regions of the world vary drastically in quality. One area—Lost Izalith—culminates in the worst boss fight in the game, and Dark Souls‘ only true “gimmick” fight. It feels half-baked, and the game’s latter half can feel a lot more aimless than the prior experience.

That being said, Dark Souls is still one of the finest games ever. Key to Dark Souls’ charm are the many vibrant, and odd characters found throughout the world. Solaire of Astora, Seigmeyer of Catarina, Patches, Lautrec of Carim, and many more can be encountered in the world. Many characters have unique, obtuse, but ultimately rewarding questlines that require you to scour the world and take your time to help each of them. These stories intertwine with the game’s larger narrative in peculiar ways, and add charm to otherwise hollow moments. Exploration is key to Dark Souls, and the characters that are tucked away make that exploration worthwhile.

Dark Souls Remastered Switch – Who Is It For? 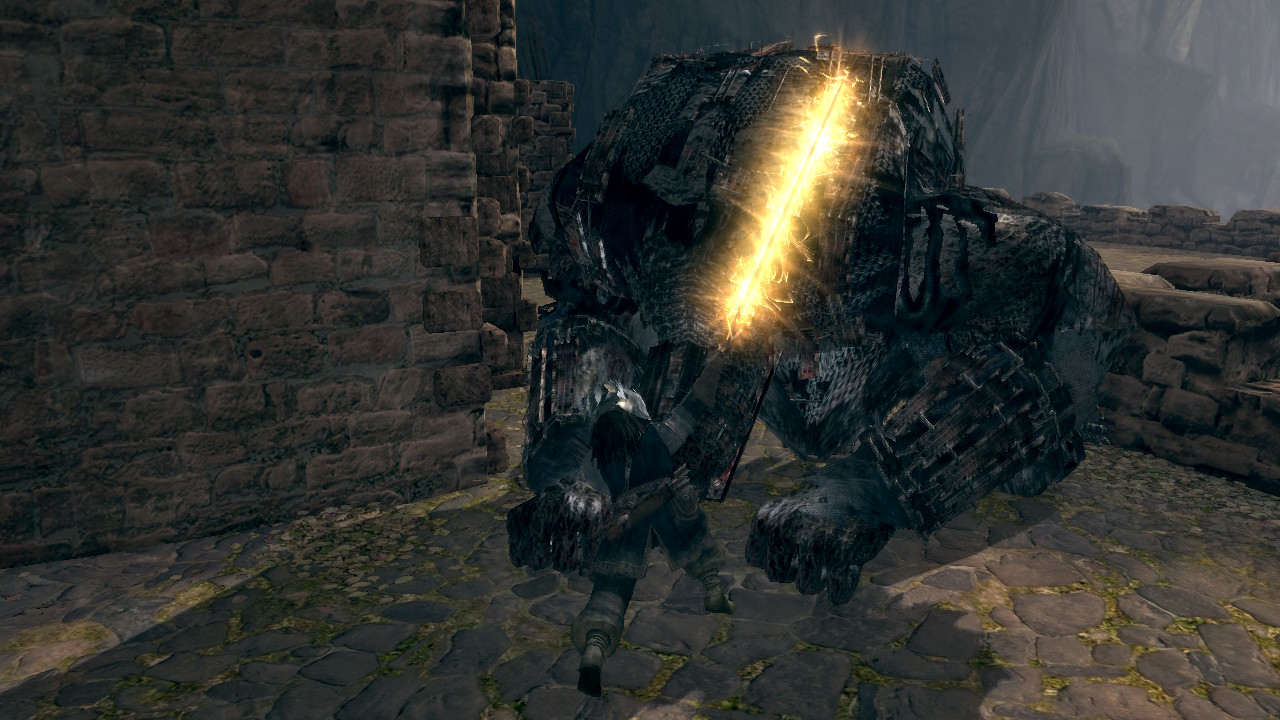 I’ve been trying to figure out who Dark Souls Remastered Switch is for. Hardcore fans will want the game because now it’s playable on the go, but it also runs at half the rate of Remastered on other systems and could have an even worse online experience. Newcomers could find it to be a good place to start, but the portable nature mixed with the inability to pause could make the game harder to play in short bursts.

People who have bounced off Dark Souls before will likely bounce off again—it’s the same obtuse, difficult title it has always been. The Switch release is a compromised iteration of the superior Remastered version, but on a handheld device. The Dark Souls Remastered Switch port sits firmly in the middle of the various releases of Dark Souls—better performance and mobility than the original releases, but worse performance and (likely) online play than the PS4, PC, and Xbox One releases.

At the beginning of my review process, I wasn’t sure if “Dark Souls but mobile” was enough of a sell for me. That quickly changed, as I happened to find myself on an airplane to Massachusetts this weekend. I cruised through Anor Londo while flying thousands of feet in the air. I did the Switch commercial things—I propped the game up on a table while riding the commuter rail into Boston, as my friend watched me get crushed by the final boss. I played Dark Souls in the courtyard of the Boston Public Library’s McKim building. I beat the game sitting on Cape Cod next to my friend that I first played Dark Souls with all those years ago.

Dark Souls on Switch takes everything great about the game and repackages it on a handheld device with some tiny performance-related caveats. The world design is second to none, and the game’s intertwining stories come together in a way that From Software—and its imitators—have failed to match. I continue to experience and find new things hidden away in Lordran’s darkest corners, and the Switch version lets me do that on the bus.

Dark Souls Remastered was reviewed on Nintendo Switch via a digital code provided by the publisher.

Nintendo Switch is Getting Tons of GameCube Remasters, Insiders Claim

F-Zero GX, Wind Waker, and Metroid Prime are all teased.
News 5 months ago