Activision drove Tony Hawk into the ground and EA seems opposed to making money and continuing the Skate franchise, which leaves the skating genre to smaller studios. This absence leads to unexpected titles like CRAYOLA SCOOT, an oddly named skating adjacent game aimed at kids. And while it looks like—and, in some respects, is—a cheap Tony Hawk knockoff, it’s actually a decent entry in a starved genre.

Reducing games to their inspirations is reductive but it’s an unavoidable starting place for Crayola Scoot. It takes the paint spraying mechanics of Splatoon and infuses them with the trick system of Skate or Tony Hawk. Scooters (is that what they call people who ride scooters?) must drench the park their specific color by performing tricks on their scooters and bigger, longer trick strings equal larger paint splats. Riding over your color even gives you a speed boost and fills your boost gauge more quickly. 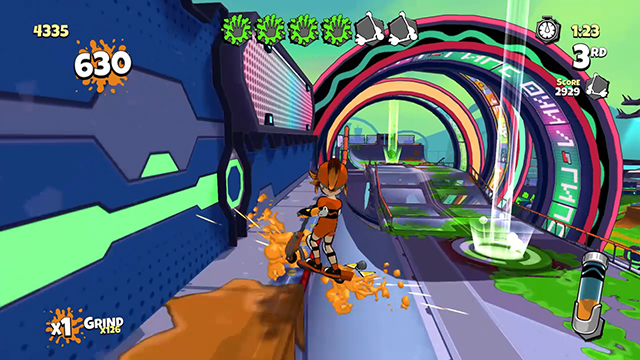 Tying the boost, speed, and trick system to the paint splatter is a clever idea because of how each encourages or assists the other. Moving faster will allow you to get bigger air for cooler tricks that let you spray more paint everywhere and the cycle repeats. Certain areas even have special buttons that spread more of your color everywhere if you land a trick near them, which adds a welcome layer of strategy to the typical score-chasing affair.

Managing your paint is essential to getting a high score. Like manuals in other skating games, boosting is the glue that keeps multiplier chains going and linking together grinds and flips with boosts mandates meter management. Although the meter ends up managing you since it drains a bit too quickly (thus making long combos almost impossible), it’s still a unique take done well enough to give the game a bit of depth.

The trick system is similarly competent but held back from greatness. Moving the right stick in any cardinal direction with in the air starts a trick with doing a quarter circle enhances it while the left stick is used for flipping. For example, you can spin the handlebars by holding up and then dab (I shuddered too) while moving the same stick a quarter circle to the right or left for more points. Tricks are accessible and easy to pull of and are good enough for those who just want to flip around. Learning the timing doesn’t take too long but does give the game somewhat of a satisfying—if short—learning curve.

However, it lacks the complexity and nuance of something like Skate, which means the skill ceiling is relatively low. And since tricks are so simple and don’t require much precision, it’s hard to not just wildly flick the sticks as much as you can before landing. It’s not like the Street Fighter-esque motions in Skate where you have to hit a specific half circle or any other motion to do one of many tricks. Just picking up, down, left, or right and then rotating left or right is usually good enough. It provides enough to learn for a handful of hours but doesn’t have longevity to do much past then. 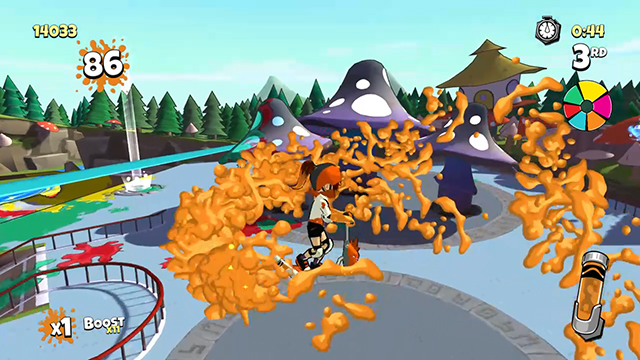 The odd lack of longevity translates to the campaign. Crayola Scoot is split into three worlds and pepper in a wealth of game types throughout the same few maps. Modes creatively use the game’s mechanics—paint splattering, tricks, and movement—in different ways and offer a healthy variety of unique things to do. However, the progression never requires you to complete much of it because you face bosses when you level up.

And since you gain experience regardless if you win or lose and can farm the same levels, it’s incredibly easy to hit the level cap and “finish” the game without actually finishing the game. I was able to buy everything in the shop (and then some), beat every boss, and get the platinum trophy without even starting a bunch of the stages. Allowing players to progress at their own pace is one thing but not having much of a structure or reason to complete anything sucks the campaign of its purpose. A better overarching scoring system, optional objectives, or fewer levels would have given the game a better backbone and more reasons to keep playing.

One thing does not change no matter how long you play: the scooters. Skateboards are almost objectively cooler but also better for gameplay. Scooter tricks look silly because they’re too impractical. It’s not to say Skate or Tony Hawk were paragons of realism but those movement systems were based in reality and looked the part. The way in which the characters hop, spin, and land looks incredibly goofy and undercuts the strengths of the trick system. Scooters may have been cool when you were nine years old but there’s a reason no one knows any famous scooter riders while almost anyone can name a few professional skateboarders.

Its art style reflects childishness just as poorly. Vibrant colors and a cartoony characters seem like a natural fit for this game but end up looking cheap and a tad gaudy instead. Humans look like dolls from Five Nights at Freddy’s with ludicrous proportions and hideous faces that are just as nightmare inducing as those in that hellish restaurant. It’s like an inverse Nintendo. The Big N perfectly balances the unassuming and charming art direction that kids would welcome but with the craft and attention to detail that adults can also enjoy. Crayola Scoot doesn’t have the ubiquitous visual appeal nor much visual appeal at all.

Purely on the surface, Crayola Scoot doesn’t have much working for it. The key art screams Wii shovelware, scooters are engineered to be the dumbest thing on wheels, and the title sounds like something you’d call the wet mark on the carpet after your dog had worms and ate three boxes of crayons. But it’s actually a fun (if somewhat annoying) Tony Hawk and Splatoon fusion with an accessible trick system in a genre that doesn’t get too much love nowadays. The skating dry spell may not have been completely lifted but it’s not as dry anymore, thanks to this modest splat of paint.

Crayola Scoot was reviewed on PS4 via a digital code provided by the publisher.

What can be used for the challenge?
Games 4 days ago