Slay the Spire review | Dungeon crawler, deckbuilder, and roguelike rolled into one

Slay the Spire is many things at once. A single-player deckbuilding game, a dungeon crawler, and a permadeath roguelike all rolled into one, developer Mega Crit Games has combined these often impenetrable genres and created something wonderfully accessible. For those previously unacquainted with deckbuilders, this is the game to get you started. For veterans of the genre, its ingenuity makes it unmissable.

Slay the Spire‘s appeal can be best explained by recounting one of its battles. I’m facing almost certain death against a Gremlin Nob, a monster pretty much designed as a direct counter to my chosen character. I’ve opted to play as the Silent in this particular playthrough, a huntress reliant on poisonous attacks and swift acrobatics. The Gremlin is a towering beast with the ability to increase its strength every time a skill card is played, ensuring that whenever I wish to block, its attack power increases. I’m already on low HP as a result of a particularly grueling run, and resign myself to once again starting over from Act I after the monster has laid waste to me.

However, something magical happens; a series of cards pop up in my hand that point to a way out of this mess. I play a card that grants me more energy, which allows me to play more cards during my turn. I play skills which add more cards to my hand, fortuitously drawing a series of attacks which require zero energy. The stars align and I begin laying down attacks one after the other while utilizing my extra energy to throw down debuffs, too. After previously dealing as little as 10-15 HP per turn, a couple of helpful card pick-ups have completely altered my deck, now increasing my potential damage output to 40-50 HP. The Gremlin’s health bar is whittled down, and every new card I draw adds to my preposterously lengthy combo. The monster finally succumbs, and I feel great. 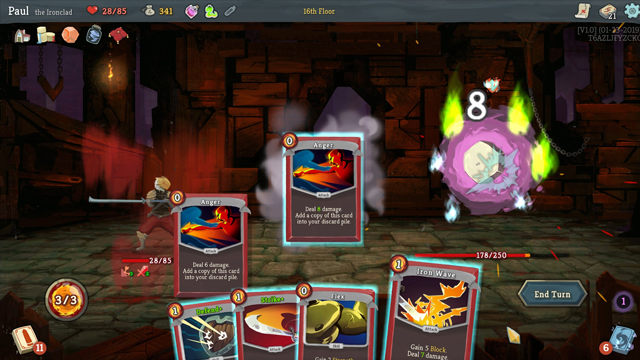 That perfect combination of cards can feel like dumb luck when you stumble across them, but the reality of Slay the Spire is that the player creates these opportunities. After each battle you’ll select a new card from a choice of three, building your deck as you progress. When everything comes together just right and you’re decimating a monster with pre-planned combos, you’ll feel like a tactical genius.

Combat is simple. In each turn, you’ll spend energy in order to play attack, skill, or power cards. These cards deal out damage, increase your block, or provide you with special abilities that aid you in battle. The aim of the game is to reduce your opponents’ health bars to zero, with you also possessing the ability to see what they plan to do during their next turn.

You’ll typically begin a playthrough with 3 energy points, which can be permanently increased by way of acquiring relics. These relics can provide you with a whole host of abilities, though can also hinder your progress. For instance, you could acquire a relic that gives you an extra energy point but prohibits you from playing more than six cards per turn.

Each of Slay the Spire‘s initial three acts — there are four acts in total, though the final chapter is unlocked using secret methods — will see you traversing through dungeons on the quest to reach “ascension.” At the start of each act, you will be given a choice of paths to choose from, with you able to see which obstacles each route will throw up against you. There are your standard minion battles, bouts with elite enemies that offer more lucrative rewards, bonfires which allow you to rest or upgrade your cards, merchants, and mystery events. 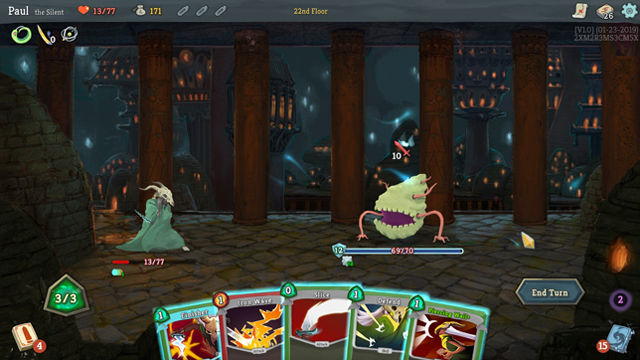 Within these acts, you must build your deck. Each of the three classes — the Ironclad, the Silent, and the Defect — possess their own unique cards that grant them character-specific abilities. The Defect manipulates orbs in order to deal out damage and gain energy, the Silent makes use of poisonous and low-energy attacks, and the Ironclad can deal out heavy damage along with putting up strong blocks.

Each class plays out very differently from the other, and each playthrough is made even more unique by the various builds you can pursue with each character. During one run you can prioritize poisonous attacks, dealing recurring damage every turn to a crowd of enemies. In another run, you can fill your hand with zero energy attack cards, dealing out monstrous damage in the process. As your rewards are randomized, you need to be able to adapt your play style to suit the literal hand you are dealt. If you’re holding onto a rare card that requires you to employ certain buffs you don’t have access to, it’s perhaps best to rid it out of your hand and focus on another tactic.

Your deck and discard pile are cycled, meaning that when you’ve run through your entire draw pile, your discarded cards will be made available again. Merchants will allow you to remove cards for a fee, enabling you to get rid of cards that weigh down your deck. The goal is to create a nimble deck filled with cards that complement one another, creating combinations that rack up massive damage while also keeping you protected from enemy attacks at the same time.

But while you can go into battle with a solid deck, many enemies possess the power to fill your hand with curse cards and ruin your best-laid plans. These cards are unplayable and serve to either damage you, hit you with debuffs, or fill up your hand in place of useful cards from your deck. Sometimes these curse cards felt a little unfair; in the early stages of a run, a battle against three Sentinel enemies will see your deck fill up with unplayable cards that you can’t remove unless you have access to certain cards. It’s not debilitating, but these situations can often wind up completely depleting your health bar through no real fault of your own.

With each new playthrough, you’ll recognize certain cards that work well together, and seek to obtain them in your next run. However, as rewards are randomized, you won’t be able to perfectly emulate a previously successful deck. Unlike Hearthstone, you’re not working towards building decks that you’ll keep with you; every time you die, your deck is destroyed, and you’ll start all over again. You can gain points to unlock new cards that have the potential to show up as rewards in future playthroughs, but you’ll always rebuild your deck from scratch after each loss. 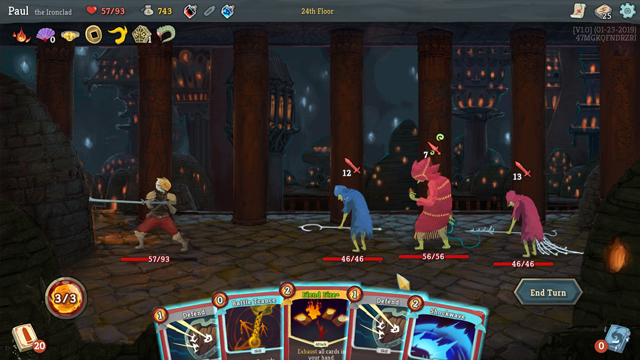 With each new playthrough, you’ll recognize certain cards that work well together, and seek to obtain them in your next run. However, as rewards are randomized, you won’t be able to perfectly emulate a previously successful deck. Unlike Hearthstone, you’re not working towards building decks that you’ll keep with you; every time you die, your deck is destroyed, and you’ll start all over again. You can gain points to unlock new cards that have the potential to show up as rewards in future playthroughs, but you’ll always rebuild your deck from scratch after each loss.

This is a refreshing change of pace for a genre that’s typically reliant on the continued acquisition of more powerful cards. Every time you play Slay the Spire, your chances of success are only limited by how you use what is given to you. If your deck is underpowered, that’s only because you’ve made some unfortunate choices during your playthrough, and you haven’t opted for rewards that complement your cards.

Considering deckbuilding games and CCGs are usually reliant on you investing countless hours into acquiring the best cards in order to battle online opponents, Slay the Spire‘s improvisational approach makes it much more accessible than its peers. I know I’m not going to be left behind if I don’t play it for a little while, and that my deck won’t be outdated when I pick it up again. The lack of PVP also doesn’t harm its replayability, with its main dungeon-crawling mode joined by a Daily Climb leaderboard mode featuring game-altering variables, and a custom mode that allows players to choose their own equipment and the obstacles they’ll face.

Slay the Spire is one of the most satisfying games I’ve played in recent memory. Laying down a series of cards and watching as they wreaked havoc on enemies made me feel like a strategic mastermind, and that this could be done without spending hundreds of hours building a deck was refreshing. Slay the Spire has spent all its energy in order to firmly sink its claws into me, and I can’t envisage putting this game down for a long time.

Slay the Spire reviewed on PC. Code paid for by GameRevolution.

Final Fantasy VII Remake Review | Not a cloud in the sky

A remake that lives up to the original.
Games 3 years ago

World of Horror combines the art style of Junji Ito with the 1-bit graphical aesthetic of early Macintosh games. Needless…
Games 3 years ago

I'd rather tear this thorn from my side.
Games 3 years ago