The first Avenger, and the first decent superhero game on the Wii.

You can smell it in the air: summer blockbuster merchandising. This time of year means big action flicks, which naturally leads to mediocre action game tie-ins. Captain America is Marvel's annual comic book film to counter DC's Green Lantern for 2011, which means there's suddenly plenty of stars and stripes to go around when you look at recent game releases. As someone who's never been a fan of Captain America as a franchise—in fact, I'd say I actively dislike what I know of him, though I haven't seen the new film—it was a bit relieving to play Captain America: Super Solider on the Wii and actually have some fun while doing so.

For starters, Captain Amer-…er, CA:SS? Hm. Let's just go with Cap-Am and save everyone some trouble, shall we? Cap-Am may have come out alongside the film, but its not a movie adaptation in any way. The game stars the red, white, and blue mascot, but the art style is clearly more comic than film, which was a smart decision given the limited power of the Wii console. Never mind his impossibly skewed body shape – he's a super solider, dammit.

The plot, insofar as I can tell, is also not connected to the film apart from the basic concept of the characters and the world. Rather than running through the Captain's history and leading up to present day (as I understand the film does), Cap-Am chucks players into World War II to kill inflict justice upon Nazi Hydra soldiers in a one-man mission to infiltrate an old castle that's been taken over and retrofitted with all kinds of crazy technology and biological experiments. Oh, those silly Germans, always adding lasers and turrets and plasma cannons to everything. After all, this is a game about Captain America, so who else would we fight but Germans, right?

While it's certainly cliché, the game carries a light-hearted tone with appropriately cheesy one-liners and some occasionally humorous dialogue from the villains that dials back the 'evil superpower' tone a few notches. Aside from commanding officers, the Hydra soldiers are all equipped with gas masks—because inspecting machinery and conducting mad scientist research simply can't be done without them. If you haven't caught on yet, Cap-Am hams it up quite a bit, but it always comes across as intentional, paying an odd homage to what the franchise seems to stand for: exaggerated patriotism. Luckily for this comic-based video game, it makes the game more fun than frustrating. 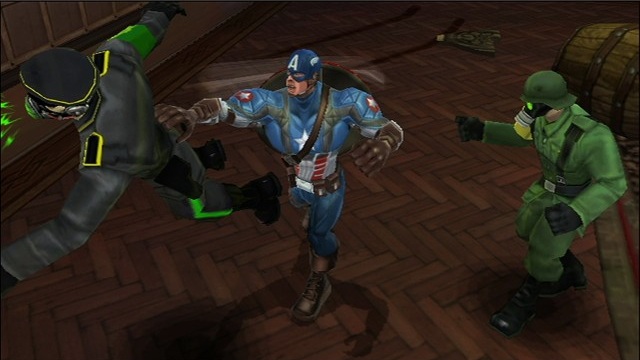 Being the Wii version, it's expected that Cap-Am would incorporate motion-based controls. My arms are thankful that it keeps any kind of waggling to a bare minimum, reserved only for very rare quick-time-lite events during more involved fights. Instead, the Wii version specializes in using the pointer. This actually contributes to a (mostly) intuitive gameplay experience, with players using the pointer and C button to whip Cap's shield at enemies and objects in a way that wouldn't work as fluidly with a standard dual-stick setup. Holding the Z button holds out the shield and pointing the cursor at objects while doing so will rotate the shield around, protecting from attacks while also deflecting projectiles.

This all means that the Captain can run in one direction, direct his shield behind him, bounce bullets into an enemy to his left, and then quickly chuck his shield to a foe in the distance, all in one relatively clean sweep. The setup isn't perfect, but it's definitely serviceable and shows that some foresight was put into making sure the Wii version actually took advantage of what it ought to: intuitive controls.

Every other aspect of the game is more simplified, which may be for the best given the target audience who probably just want an easy, flashy action game. Combat plays like a severely toned down Arkham Asylum, with one button attacking and another countering (plus the shield for blocking and distance attacks). The Captain's smart enough to pitch himself toward the nearest enemy without needing to hold down a direction, and will pounce across distance when needed on his own. He just needs you to press the “Administer Justice” button (aka the “B” button) and he'll go to town for you, complete with slow-mo, overly dramatic finishing moves. 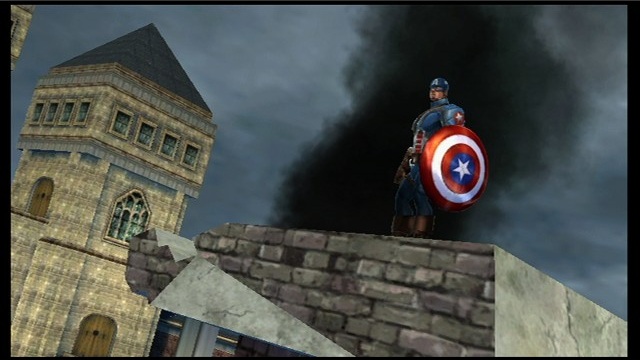 This cut-and-dry fighting will get a bit tedious and boring for some, especially since Captain's moveset barely changes throughout the game, but it's easy to forget how more casual game players will appreciate the simplicity. To add to this, even the platforming is given training wheels—icons will appear where the Captain will leap to when the jump button is pressed, and tilting the control stick will adjust the destination. This takes away most cumbersome and ineffective platforming elements, instead getting players to focus on how to traverse certain areas rather than just hopping some ledges. While this usually feels straight-forward, sometimes Captain will hurl himself off into nothingness, his destination somehow at the bottom of the tall room you're trying to scale.

With all of these mechanics meant to be friendly to inexperienced players (or “dumbed-down”, depending on how polite your vocabulary is), the game at least shakes things up toward the end so that simple button-mashing won't win the day. Captain's shield is often used for light puzzle-solving, and some larger enemies—bosses, in particular—need to be approached with adjusted tactics. Every level also has a good amount of hidden goodies to collect for behind-the-scenes unlocks and bonus experience points. The points, in turn, are used to upgrade Captain's abilities in ways that enhance his combat a bit, add extra features to his shield, or increase his meters, all standard in action games by this point.

There are also optional side-missions in each stage that genuinely force players to use the Captain's powers to their maximum potential to do things like defeat certain combinations of enemies in a strict time limit, or navigate an obstacle course, etc. The real difficulty of the game lies in these missions, so players wanting something more to test them and burn time will find it.

When all is said and done, Captain America: Super Soldier isn't just another tasteless cash-in, but it's also leagues away from rising up to its potential. It has design decisions that make good sense for the platform and the audience with enough content to keep players busy who want more than just a linear adventure, but it struggles with uninspired plot, characters, and atmosphere. Its light-hearted, alternate approach prevents it from feeling like a cheap knock-off of the recent film and more like what it really is: a video game adaptation of the franchise. Like many comic-themed movies, this game is simple, cheesy, and can provide some fun for those open-minded and wanting something different to play on their Wii.

It goes splat!
News 2 months ago
7

The Princess is in the castle.
News 4 months ago