Lord of the Rings: War in the North Review

Fellowship of nine? Bah! We’re getting it done with only three!

It sucks when you work hard and don’t get your due. It’s true for stagehands on broadway shows, roadies with rock bands, or me that one time I singlehandedly saved Anthony from a ravenous group of hipsters brandishing their iPhones when he visited the Berkeley office last year (no mention on the front page whatsoever).

The point is, the people behind the scenes work hard and rarely get credit for it. In the case of The Lord of the Rings, five dudes and four pint-sized mini-dudes got hailed for saving the world, as if nothing else was going on besides their quest to melt a little ring. Those selfish bastards.

If you pay attention to the narrative in LotR, you may notice small mentions here and there of the war in the North, which was actually a significant crisis of its own. Enter Snowblind Studios, who have created The Lord of the Rings: War in the North, so that we may experience this side-story for ourselves. Can't leave epic content on the table like that.

Chronologically, War in the North occurs concurrently with the War of the Ring that we all know and love. The story kicks off in Bree with our three heroes—the ranger Eradan, the dwarf Farin, and the Elf Andriel—meeting with Aragorn at the Inn of the Prancing Pony shortly before the Hobbits arrive. Aragorn sends them to Fornost to distract the gathering army of orcs and goblins, so the Hobbits can make their way to Rivendell relatively unhindered.

That army is led by a huge creepy guy named Agandaur, who turns out to be Sauron’s right-hand man in the North, charged with conquering those lands while the big kahuna focuses on battle down south. The conflict with Agandaur leads the team through ruins, undead tombs, enchanted forests, snowy peaks, and fortified enemy strongholds. LotR nerds will be happy to run into several familiar places, such as Rivendell, where you can briefly chat with the Fellowship before they go off on their own quest. 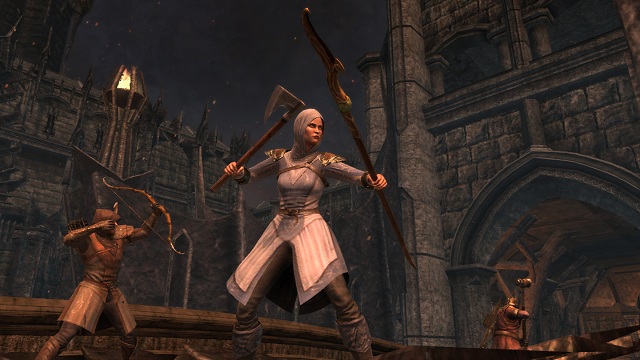 The lore is one of the strong points of War in the North. Snowblind clearly did their homework, offering up plenty of Middle-Earth history through NPC conversations and sidequests. If you’re not into LotR, you’ll no doubt have trouble keeping up with the bombardment of names and stories that get thrown your way, but fans will be kept nice and happy with the attention to detail.

But unfortunately the same care that was taken with bringing the world of Middle-Earth to life hasn’t been applied to the characters. The protagonists are bland and have nothing really to distinguish them from any other human, elf, or dwarf. Don’t expect the friendly rivalry between Gimli and Legolas or the misguided ambitions of Boromir with these guys—they just work cohesively and never have interesting things like personalities or character flaws to get in the way of that.

The gameplay works by and large, offering a good 20 to 30-hour adventure that is well-paced and engaging enough to keep you playing. There isn’t anything especially innovative about it, but it’s all solid. Melee combat involves stringing together hits with light attacks until you get a triangle over an enemy’s head, which signals your chance for a critical strike. If you land it, you enter “hero mode”, which makes all your attacks stronger, staggers enemies, and gives you XP bonuses for combos.

Each character also has ranged attacks; Eradan and Farin use bows and crossbows while Andriel fires energy from her staff. As you level up, you’ll distribute points into the stats of your choosing and also get skill points which you can use in traditional talent tree format. In this way the characters are very customizable; one Eradan player could make him a master marksman while another could make him a stealthy dual-wielding melee specialist, and likewise Andriel could be built up as a powerful mage or as a stalwart healer for the group. 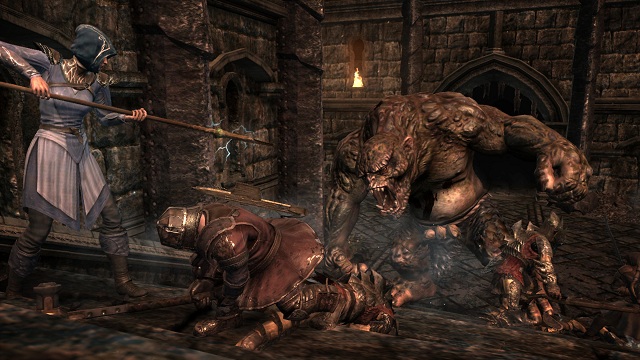 The only real problem with the combat is that there’s no lock-on system in place. If you get overwhelmed by a horde of orcs, you’re likely to lose your target as you get jostled around by all the bodies. This isn’t helped by the fact that enemy and ally alike have large collision detection boxes, causing them to often get in the way of your intended target right when you’re about to land that sweet critical hit. Without a lock-on system, there’s also the tendency to lose sight of… well, almost everything if you get backed up against a wall because the camera is too dumb to adjust itself.

Like any co-op game of this nature, War in the North is best played with friends. If you have to go solo, the AI is smart enough not to be a pain and equips itself with new gear, allocates its own stat points, and learns its own skills—but it’s just not as fun as getting three people together and screaming at each other over what to attack and who needs reviving.

I also noticed that single-player is significantly easier than co-op. The AI partners seem capable of absorbing immense amounts of punishment, whereas my times playing co-op with fellow journalists saw us all constantly dying around each other in the same areas of the game. 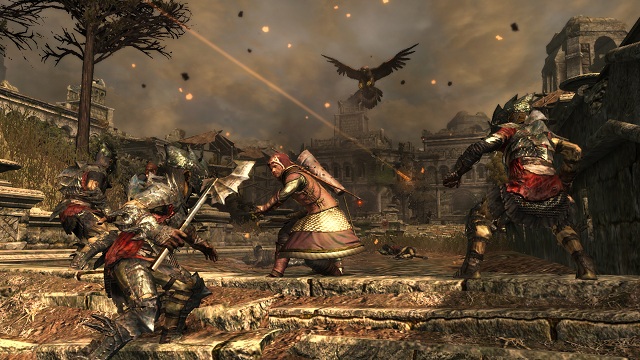 I hate mentioning bugs, as they can be patched, but I did encounter one severe glitch that ruined an entire playthrough. I went about three hours on my first save file before stopping. When I came back, the game would freeze every single time I tried to load it. I essentially lost all of that progress and had to replay the game from the start.

Whatever caused that problem is a mystery; it could have just been a freak occurrence, it could have been something related only to my review platform (PS3). But regardless of how and why it happened, a glitch as serious as that is a big no-no when you hand a game to a reviewer. It’s enough to dock points on what would otherwise be a solid 'B' game.

If that game-breaking incident isn’t enough to deter you, then War in the North is a good choice for some solid action-RPG fun. It isn’t amazing, but it’s a competent effort and certainly one of the better LotR games to come along. Isn’t it about time that the smaller characters, bland as they are, got their due?

Review based on PS3 platform. Copy provided by publisher.

No one can hear you scream.
Games 4 days ago
7

It's remarkable at one things, lackluster at others.
Tech 4 weeks ago
8

XLR is the new USB?
Tech 1 month ago