It wasn’t exactly obvious that The Legend of Zelda would lend itself so well to a rhythm roguelike, but that’s exactly the case that CADENCE OF HYRULE makes. As one can defer from its ridiculously long official title of Cadence of Hyrule: Crypt of the NecroDancer Featuring The Legend of Zelda, this is a Zelda-themed spin-off by NecroDancer developer Brace Yourself Games. Nintendo giving one of its most iconic series to an indie developer for a wonderfully weird title is an awesome circumstance worth celebrating in and of itself, but thankfully the game’s quality proves it’s more than just a good idea.

If you’ve played Crypt of the NecroDancer then you should be familiar with the core gameplay in Cadence of Hyrule. Rather than walking through dungeons, Link or Zelda will hop around from space to space. All of the creatures in Hyrule also bounce to the beat of the music playing, and the player gets bonus multipliers for staying on-beat.

It puts a fun rhythmic twist on what is essentially a standard turn-based action game, as players have to keep moving if they want to be effective. There is a lot more combat this time around and having to constantly pay attention to the beat adds a welcome layer of depth to the mechanics. So even though you’ll be fighting more often than a regular Zelda title, it doesn’t grow stale and is even one of the game’s strongest aspects because of how engaging the rhythm-based core is. It’s worth mentioning that players can also move off-beat, which is useful when trying to get away from a crowded area. However, this will forfeit your multiplier.

The key difference between NecroDancer and Cadence of Hyrule is how they are structured. The original title was built like a traditional dungeon crawler where players worked their way through the individual floors of caverns. This isn’t the case here, as there is an actual overworld that is heavily inspired by A Link to the Past with dungeons. This has the same structure as a regular Zelda game as players will have to travel to different dungeons, solve puzzles, and unlock a series of items that will allow them to explore more of the world. 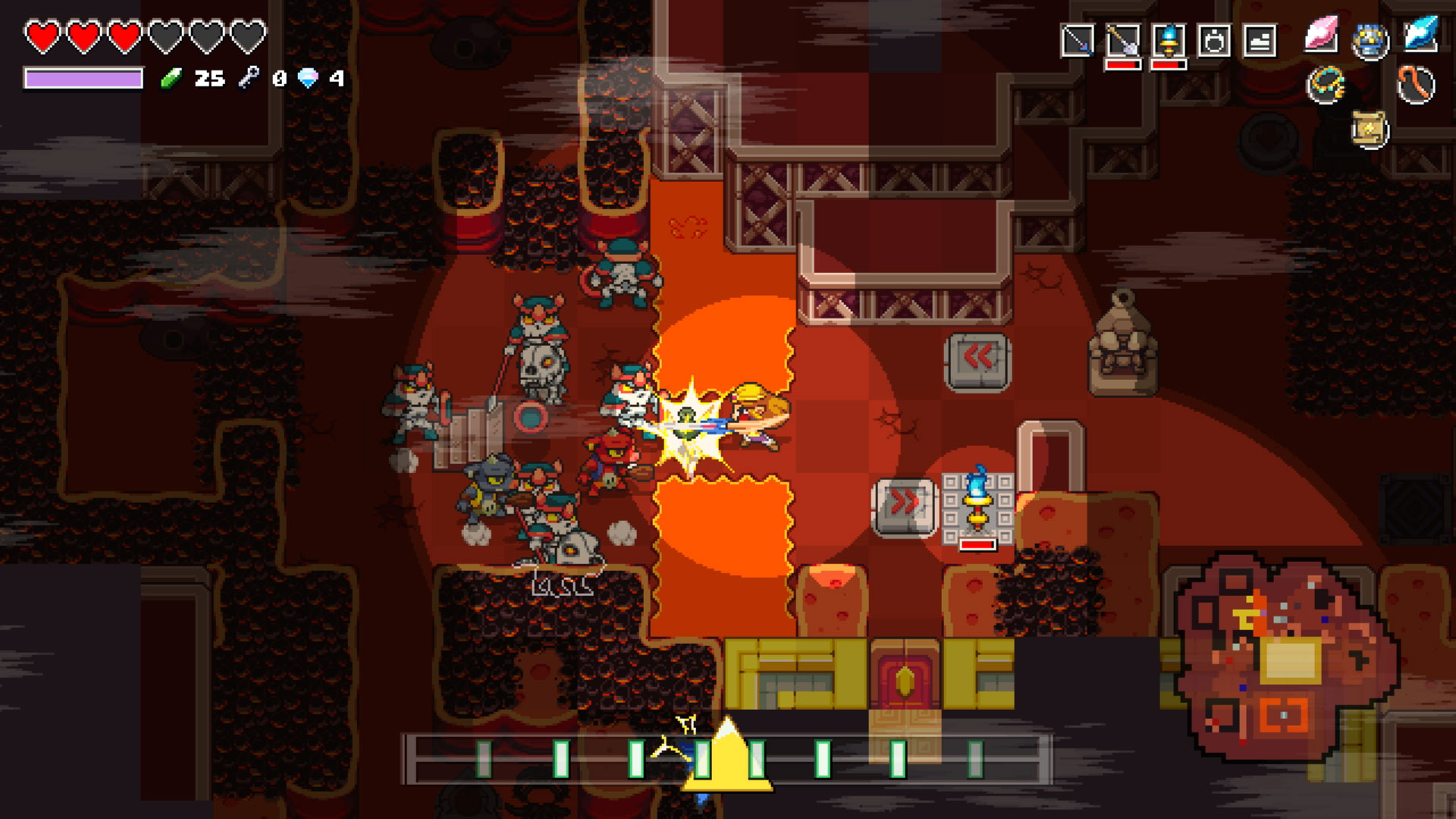 Despite the drastic change in format, Cadence of Hyrule does manage to keep some elements of its roguelike roots to the game’s benefit. Death means a lot here, as Link or Zelda will lose all of their non-essential items and rupees that they picked up during their run. A separate currency is also available, as players will be able to spend diamonds after their death to pick up a few perks and items for their next life, which relieves some of the tension brought on by its roguelike roots. It’s a welcome change to make sure players are almost always making progression.

This is mainly only important early on as the rhythm role-playing game is far more difficult during its initial hour than later on. After players get enough hearts, it becomes more difficult to actually die than to survive. It’s a far departure from the harsh difficulty of Crypt of the NecroDancer, but one that is ultimately welcomed.

If you love The Legend of Zelda but don’t have a soft spot for rhythm games then you will be glad to know that the rhythmic element can actually be turned off in the options. By turning on “fixed beat” mode, players turn the action into a more traditional turn-based dungeon crawler. Whenever the player moves their character, so will the enemies.

It allows for the player to plan their attack more carefully and significantly speeds up the experience as you can dart across an area without worrying about being on the rhythm. It’s a thoughtful addition, although those that opt to play it this way will lose some of the uniqueness and appeal of the experience. Because of this, playing it normally is worth a shot at first.

If played without the rhythm elements, Cadence of Hyrule‘s shortcomings become more pronounced. When judged like a regular Zelda game, the Switch exclusive’s handful of short dungeons are a lot more underwhelming. Each location only takes a few minutes to beat and puzzles never become as interesting as in the proper entries. Puzzles are too simple, devolving into rote memorization or simple block moving. They’re a far cry from the elaborate, satisfying puzzles found in like A Link to the Past, Wind Waker, or many of the franchise’s proper entries.

The bosses also lack much of a challenge, although they are fun to battle and feature some great musical puns on Zelda foes. It is actually similar to Koei-Tecmo’s Hyrule Warriors in that the elements of a Zelda game are all present but it doesn’t hit them all due to the changes in genre. That said, it does so much differently from the regular titles that it can be fully appreciated on its own when played with the rhythm parts turned on.

Cadence of Hyrule Review | A bright future for Nintendo 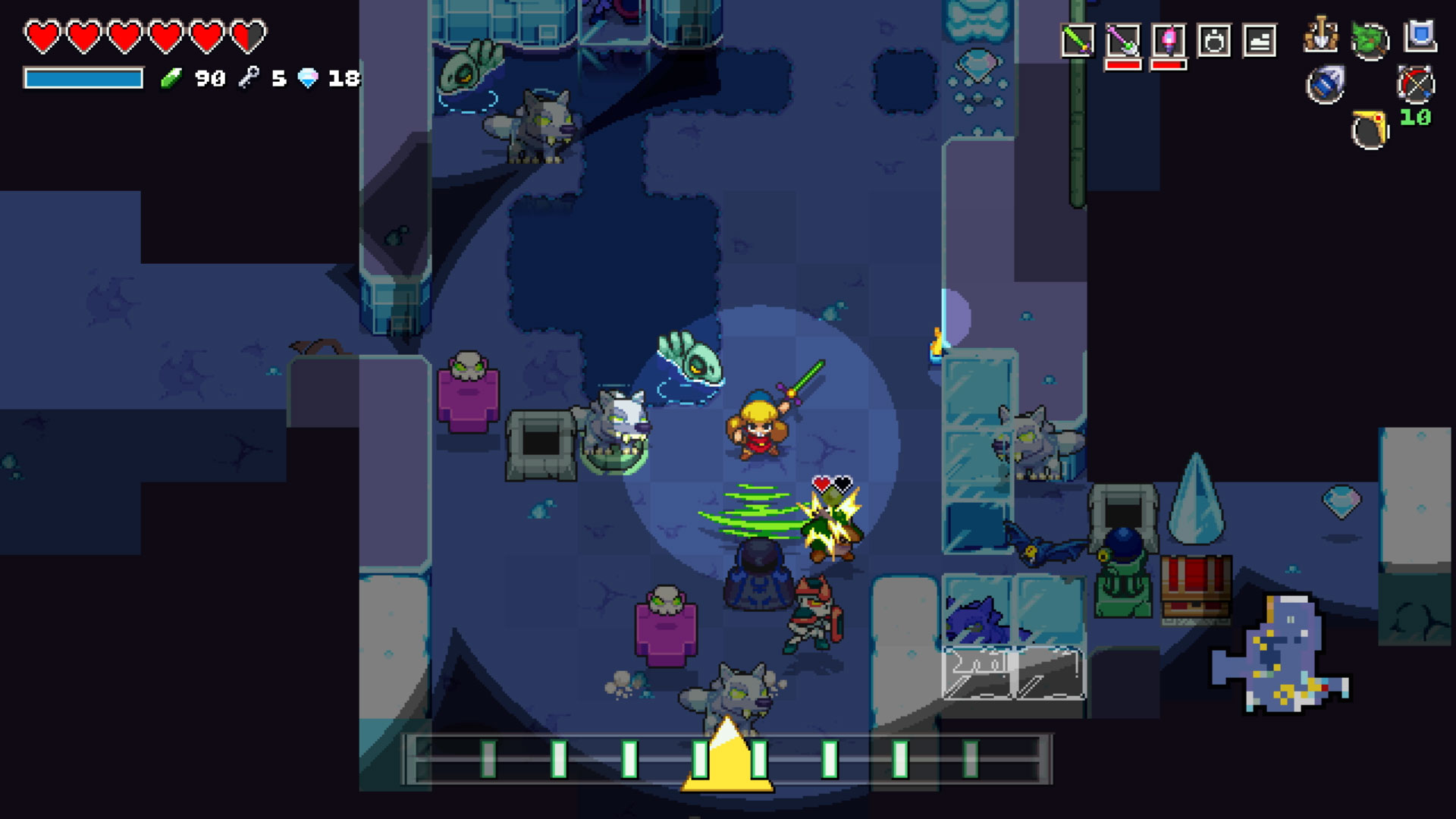 Despite its few shortcomings, Cadence of Hyrule actually nails a lot about Zelda. The game looks absolutely gorgeous and sounds even better with remixed songs from throughout the series. The overworld is also chock-full of secrets and there is an incredible feeling of exploration as players unlock new items that will allow them to solve puzzles that seemed baffling before. There are a ton of items and characters that players might completely miss upon beating the game, and Cadence of Hyrule gives players plenty of reason to jump back in and explore more of this rendition of Hyrule.

If you can accept Cadence of Hyrule for what it is — a combat-focused Zelda game that is charming at every opportunity — then it is difficult not to have a great experience. The changes take some adjustment and the difficulty seems too harsh at first, but moving on rhythm feels like second nature after just an hour. It’s certainly one of the most unique spins on Zelda we have ever received and it manages to be unabashedly Zelda despite having roots as another game series.

Ultimately, Cadence of Hyrule is a dream collaboration between two talented companies that are known for putting a tremendous amount of heart into their products. Any fan of Zelda will be able to enjoy this digital title thanks to its optional modes, although the best experience will be embracing its rhythm elements that make it so unique. Hopefully the success seen here will lead to Nintendo allowing other talented indie studios to put their own spins on their great properties as it allows fans to celebrate them in a new way.

GameRevolution reviewed Cadence of Hyrule: Crypt of the NecroDancer Featuring The Legend of Zelda on Nintendo Switch with a copy provided by the publisher.

As charming as any Zelda title. Combat and exploration is a blast. Can turn off rhythm elements if you want.…
Friday

As charming as any Zelda title. Combat and exploration is a blast. Can turn off rhythm elements if you want.…
February 10

As charming as any Zelda title. Combat and exploration is a blast. Can turn off rhythm elements if you want.…
February 21

As charming as any Zelda title. Combat and exploration is a blast. Can turn off rhythm elements if you want.…
February 24

The Legend of Zelda: Skyward Sword HD Review: ‘Still the odd one out’

Players can reportedly enjoy Chapter 1 and carry over progress.
News 2 years ago

Hyrule Warriors: Age of Calamity microtransactions may be coming for physical pre-orders

Buying digital might be the best idea.
News 2 years ago

Hyrule Warriors: Age of Calamity is set 100 years before Breath of the Wild

A Zelda prequel with a different way to play.
News 2 years ago