Greetings, traveler! There are new missions at the Fyrestone bounty bo… oh wait, this isn't Borderlands and I'm not Claptrap. Sorry for the confusion, fellow Vault Hunters. Borderlands 2 is such a seamless sequel to the first Borderlands that I sometimes forget that I'm playing an entirely different game. Or is it?

That's the main question you'll need to ask yourself when considering Borderlands 2 as a work of game design. If you believe sequels shouldn't just improve on its predecessor, but introduce completely new ideas of their own, then you might knock the title down a peg. But purely as a matter of purchase, I won't beat around the bush: Borderlands 2 is a remarkable four-player cooperative FPS/RPG hybrid that only the loneliest players should consider avoiding… though I suppose a single-player campaign is a legitimate, albeit not recommended, way to experience this new world of Pandora.

Within the opening cut-scenes of Borderlands 2, Claptrap once again greets you in the dangerous wasteland, only this time you begin on an icy tundra, a place you didn't discover of your own free will. Long story short, Handsome Jack wants you dead. Ever the egotistic bastard, he has screwed over the original four Vault Hunters by taking all the credit for opening the Vault and has subsequently wheedled his way to the top of the Hyperion corporation. After learning that another Vault may exist, Handsome Jack attempts to seize the entire planet and kill anyone in his way—including you, another Vault Hunter—for his own greed and amusement. Oh, did he bomb the train you were on? Poor, little you.

So as you pick yourself up from the snow and dust off the metal debris, you have only one thought: He's so dead. Luckily, nearly every settler on Pandora wants him off the planet too, especially the first four Vault Hunters, whom you can interact with as NPCs throughout the main story missions, and the mysterious Guardian Angel who again appears in an effort to help you settle the score. For side missions, you can visit a nearby bounty board or ask old friends like Marcus, Zed, Moxxi, and Scooter who all reside in the fortified town of Sanctuary, the last bastion of resistance against Handsome Jack's oppression.

No matter which class you choose, you're just the hero the resistance has been looking for. The four new classes are mainly tweaks to the original four, particularly the Siren which hasn't changed in name. Maya has as much elemental firepower as Lilith but her Phaselocking ability acts like a stasis lock that holds unfortunate suckers in their place. Axton the Commando upgrades Roland's turret by allowing him to shoot it long range and reclaim it to shave off a few seconds of cooldown.

Replacing Brick is Salvador the Gunzerker, who is built like a tank but doesn't have as much punching power, instead opting for dual-wielding madness to mow down bandits with ease. Last but not least, Zer0 the Assassin pairs Mordecai's natural sniping skills with a decoy cloning technique that can provide breathing space for a few seconds or room to stab a foe in the back for extra melee damage. (Guess which class this ninja is going to be?) 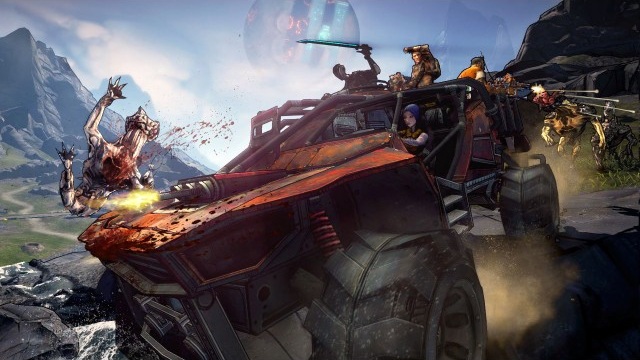 Another minor adjustment is a notable increase in speed and time saving. With a quicker run speed and swift loading times between areas and menu interfaces, you'll get back into the action within seconds. To cut down on picking each loot drop separately, walking over any loose ammo and cash drops brings them automatically to you like a magnet.

Several weapons and accessories have been granted additional effects. Fuse times have now been added to grenades, with some that can explode instantaneously on impact and even spawn a cluster of child grenades to finish the job. Shields offer an extra layer of defense with elemental nova blasts as well as automatic backsplash damage against pesky melee opponents like psychos and rakks. Bars of eridium, used for upgrading ammo capacities and backpack slots, can not be found as rare item drops in everything from washing machines to stinky loot piles, encouraging players to be thorough in their looting. My only question is where the zoom stat has gone; even if it's a fixed amount of magnification for a specific weapon type, it shouldn't be hidden from us.

The new purple slag element, which is far more effective in parties than in solo play, works as a status effect. Any slagged enemy receives more damage from non-slag weapons, which naturally lends itself to having one member concentrating on inflicting slag so that the rest of the party can bury enemies faster. Along with a new interface for trading and the ability to deploy two vehicles simultaneously, cooperative multiplayer is better than ever. 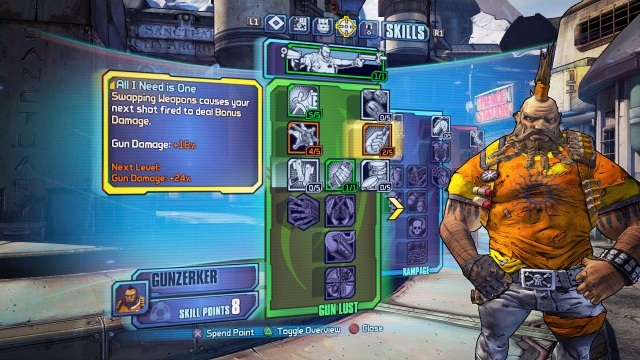 To encourage further replays and character creation, the developers have added quick change booths where you can change a character's color palette and head, as well as a challenge system that reward badass ranks and badass tokens. Redeeming these tokens leads to bonuses that affect all characters you've made on your profile, giving any new characters a small but helpful boost in nearly every stat. If that weren't enough, Claptrap eventually grants you access to his storage locker where you can share items between all your characters, which is a godsend if you happen to find particularly rare class mods or merely want to give another character some extra spending cash.

As a critic, the only substantial thing Borderlands 2 can be faulted for is being too much like the first Borderlands. This doesn't discredit the sheer volume of improvements Gearbox Software have made, but it does call into question whether it has a voice of its own. They didn't fool around with what made the original Borderlands so darn right hilarious and a blast to play with friends, but at the end of the day, it's still a grind-heavy loot-fest whose Diablo inspirations are very transparent. It must also be mentioned that the "fight for your life" state is still too dependent on having enemies nearby to earn a second wind and usually doesn't recognize when you've killed an enemy using continuous damage from an elemental weapon.

Though Borderlands 2 doesn't shoot for the stars, it does more than enough to retain our most awesome recommendation. As long as you have several friends who can join your party, there's no way you will be disappointed. (And if you need some assistance, you can check out my handy tips guide.) With a guns and a wealth of enhancements that can't be denied, Borderlands 2 has incredible appeal and all the elements to set the world on fire once more. Including one giant flaming rocket launcher.

Review based on PS3 version. Copy not provided by publisher.

There's a lot to digest.
Originals 1 week ago