Are you a fan of the Fable franchise? Did you hear about Fable: The Journey and rush out to pre-order it or consider buying it upon release? Did you think to yourself, "How bad can it be, it's still Fable even if it only supports the Kinect?" Well, the good news is that the gameplay style is definitely something innovative for the Kinect. The bad news? It's not Fable. This game wasn't made for fans—it was made to sell Kinect. Anything having to do with the Fable saga is secondary, and the game suffers because of it.

You're put in the role of Gabriel, a "dweller" who gets separated from his tribe during a terrible storm. From then on, you and your faithful horse, Saren, must traverse the land of Albion and seek out the darkness sweeping through the land. Despite boasting one of the most "vast" environments in a Fable game to date, it has an extremely claustrophobic feel. The chase sequences are the most interesting, in that you see parts of the road ripped out from beneath you, but they aren't terribly long sequences.

There's also no open-world aspect, no ability to truly explore the world set out before you. The game sets the path for you, so there is no room for compromise. The only time you get to choose anything related to where you'll go is when the roads diverge or when there's a colorful circle indicating an "optional stop" area. This is the closest you get to side quests throughout the entire game. I know it's not supposed to be an open-world RPG, but why promise gamers an environment bigger than any other in the series and not even give them the ability to turn the character's head from side to side?

Most of the optional stops are just puzzles that lead to treasure chests where you get absolutely nothing that can help you upgrade your character or give you an advantage during combat. All you get from treasure chests are collectible trading cards that reference things you might remember if you played the previous three Fable games. If you're looking for extras, you won't find them in the game.

When you enter the Upgrade menu to strengthen your magic spells there's a notice to redeem tokens from Fable Heroes. If you buy and play Fable Heroes on Xbox Live for 400 Microsoft Points, you can unlock tokens to spend on upgrades in Fable: The Journey. This, however, is a bit unnecessary seeing as the game is incredibly easy regardless of what you do—the shameless marketing is a bit over-the-top. 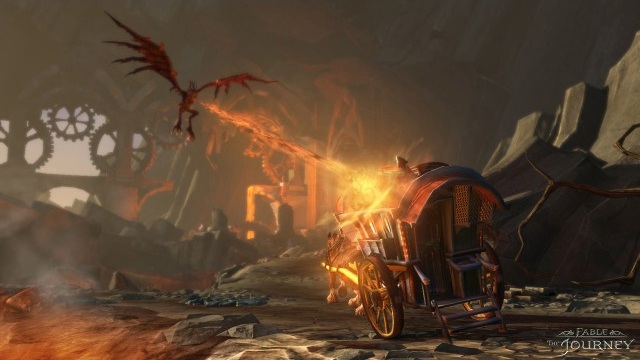 The most difficult portion of the game was the sporadic accuracy of the controls. Even after calibrating the controls, I ran into several issues during battle where my spellcasting wouldn't be as accurate toward the end of a level as it had been at the beginning. This is partially due to the fact that three out of four magic attacks you learn are all activated with different gestures from your dominant hand. You can also activate the magic spells by saying their names while in combat, and I can tell you there's nothing more shaming then yelling "Fireball!" at your television while Nick_Tan giggles maniacally on the couch behind you. People who enjoy larping might find the voice recognition a bit entertaining, but why pay fifty bucks to yell at your TV when you can meet a group of people in a clearing and throw bean bags at them while wearing a cape?

The only glimpse of hope—the only time I wasn't rolling my eyes—for this entire game is the part of the story involving Theresa, a character who's main role in the previous Fable games was that of the mysterious figure who lurks in the shadows providing guidance from afar. In Fable: The Journey she is still a mysterious figure who provides guidance, but from the front seat of a horse carriage. She mostly just sits there while you run off ahead and clear paths or investigate suspicious areas.

During a few campout sequences we're given a more personal glimpse into what made Theresa the Seer, but in doing so we are also shown a storyline that may have made for a better game. A prequel detailing the backstory of a character fans actually are interested in would have been a better route to take than the awkward gypsy "dweller" boy who saves the world with his magic hands. 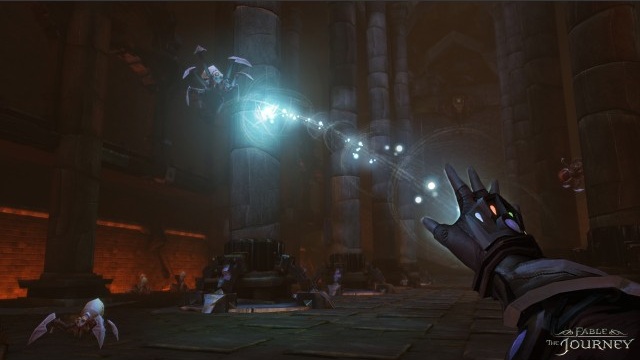 Fable: The Journey is just a jumbled bunch of nonsense. I believe the intentions for making this game were good as far as the Kinect technology, but the poor controls coupled with the weak storyline really hurt this title. It seems like someone may have had a good idea for a first-person Kinect game and ended up slapping the Fable brand on it to see how it would do, which is quite horrendous. I think if they would have reworked the concept, stripped out every trace of Fable, and made this a My Little Pony title, it might have made some sense.

Innovative Kinect gameplay style ...but accuracy is far from perfect Theresa's backstory is explained ...but should have been the main…
Friday

Innovative Kinect gameplay style ...but accuracy is far from perfect Theresa's backstory is explained ...but should have been the main…
February 10

Innovative Kinect gameplay style ...but accuracy is far from perfect Theresa's backstory is explained ...but should have been the main…
February 21

Innovative Kinect gameplay style ...but accuracy is far from perfect Theresa's backstory is explained ...but should have been the main…
February 24