Many first-person shooters try to entertain players with a blockbuster roller coaster, where bullets fly fast and explosions happen every ten seconds. Some others this year have taken slightly different routes, but it still remains that shooter campaigns are all about big moments. Keep the player running, ducking, shooting, grenading, knifing, and so on. What might have been a dull car drive becomes an exciting race that keeps you guessing. If your game can't do that, you have to rely on your story instead.

That may have been true a console generation ago, but these days many games make no bones about how much of a focus multiplayer is, Medal of Honor chief among them. But with all the competition, including Spec Ops: The Line and the upcoming Call of Duty: Black Ops II, Warfighter has a lot stacked up against it. Does it simply check off everything on the back of the box or is there something special in the latest from Danger Close and Electronic Arts?

Warfighter's campaign puts players in the boots of soldiers on the ground in Somalia, Yemen, and Bosnia. The player inhabits Preacher, Mother, and other code-named "Frogmen" on the hunt for a terrorist network with ties to a chemical called PETN, a powerful explosive. The story starts out with a terrorist attack, but then hops the player back a few years, or months, or… I'm not quite sure. I certainly had trouble following the plot as it got buried under more and more military jargon and the frequent timeline mix-up.

In fact, Warfighter's campaign is largely a shooting gallery, ushering players from one location to the next, only to play whack-a-mole with the terrorists you're assigned to hunt down. In fact, much of the game is played similar to the training mission you can watch above. Baddies pop up and return under cover. They run rapidly to their hiding spots and wait patiently for you to shoot them in the head. On higher difficulties, they have better aim and you can take less damage.

A few rooms propose to mix things up. About three quarters through the game I found myself in a two-story room. On the far side, enemies flooded in and hid behind cover. I looked to my left and saw a flight of stairs going up. Exploring, surprised by the variation in what was until that point a straight path, I found that I could take out a few attackers and flank the remaining on the bottom floor. Then I exited the door and found monotony on the other side.

If this is supposed to be like Battlefield, where's the sandbox? Where are the wide-open spaces that make cover out of landscape? What about the sprawling urban battlegrounds?

Warfighter also attempts to distract the player with truly sloppy driving levels. Cars slide everywhere and can only be driven in first-person, because the cars all look like unwanted stepchildren in the game's Frostbite 2 engine. Cars handle like a boat in water. I know this because there's also a boat driving level. Twenty minutes of chasing another car quickly grew boring and hiding from enemies in cars in another level was equally disappointing.

The E3 demo from this year, a mission called Shore Leave exists seemingly unchanged from what we saw back in June. That's actually a good thing. It manages to achieve some semblance of the "thrill ride" Call of Duty and Michael Bay make bank on. The robot is fun to drive, proves a good perspective on the battlefield and allows the player to push forward freely. The robot isn't hogtied by your CO and forced into a carnival game before getting pushed forward again. More importantly, the robot has a flashlight.

Your enemies have flashlights too. They'll frequently blind you with them, as they're as bright as Battlefield 3's before that game's multiplayer patch. It's a disgrace that the issue could rear its ugly head in an entirely different game. Of course, the flashlights wouldn't be such a bother if Warfighter wasn't so dark throughout its campaign. What's more, the darkness wouldn't be a bother if you could use your night vision goggles at will, but that's not allowed either.

When it comes down to it, Medal of Honor: Warfighter's campaign is a messy, uninspired affair. It lacks compassion, despite staking its reputation on how much it cares about portraying the Tier 1 soldiers as accurately as possible. Multiplayer on the other hand is an entirely serviceable option to gamers hoping to take the fight online. 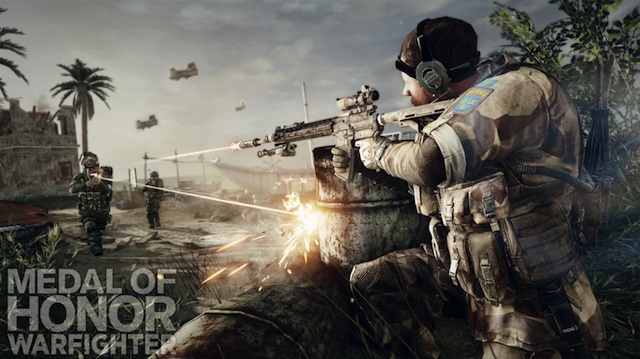 Ultimately, we're left with multiplayer modes typical to any modern-day shooter. You've got your domination mode and team deathwatch mode. You can customize your weapon and your soldier. In fact, once you finally get into a match, you'll find nothing out of place or exciting in Warfighter's multiplayer modes.

Once you've got boots on the ground and a gun in your hand, Warfighter does take some risks. Each player has a buddy to partner up with in the heat of battle. You can get ammunition from your partner by walking up and holding the X button (Xbox 360). What's more, exacting revenge on your partner's killer allows your buddy to immediately spawn near your location. Bottom line: You want to stick together.

This is actually a great benefit to the typical multiplayer formula. Individual players are more likely to engage in cooperative play and the team will perform better for it. Beyond this system, though, Warfighter is once again content to sink back into monotony and darkness.

It's true that EA and Danger Close have produced a game that's both playable and not entirely offensive to the senses, but it was a bad idea to release this title against the slate of AAA releases comparable to it. Warfighter prays on the basest emotional sentiments but fails to pay respect to anyone involved in the experience, the player chief among those parties. Instead of insulting their loyal fans, Electronic Arts and the new stewards of the Medal of Honor brand need to finish developing the game on the drawing board.

If you don't have a complete plan of attack, the mission will result in a critical failure. Warfighter isn't a total failure, but it's certainly not up to the standards of the international Tier 1 Operators it clings to.

Here are all of the bug fixes and new additions.
News 1 month ago
7

Don't discount Roblox when it comes to horror experiences.
Originals 3 months ago