Considering how popular they are, it’s surprising how few major publishers take a stab at roguelikes. Before this week, the biggest was probably Devolver with its megahit, Enter the Gungeon. Innovation in the genre has come almost exclusively from startups, with games like Dead Cells and Slay the Spire creating entire paradigm shifts and new subgenres. This is one of the most interesting things about RAD, a neon-drenched top-down melee game from Double Fine and Bandai Namco. No matter which way you slice it, Microsoft’s newest acquisition is one of the most experienced teams to tackle this kind of game. The final result is an interesting combination of polish and feature bloat that’s probably worth your time.

You play as a young survivor of the second apocalypse. Not only did humanity as we know it blow everyone to kingdom come, but a second race also tried and failed to fix things with technological marvels. Much like the original Vault Dweller in Fallout, the elder of your group sends you into the wastes to restore power to your society. To protect you from the ravages of radiation, your elder shields you through some rad tuneage. Instead of dying from nuclear fallout, the rock lets you grow snakeheads, boomerang arms, and turret tumors. Using these powers and a trusty teleporter bat, you go out to take on the wilds and save your friends from the most horrible fate of all: losing their high score on Pac-Man. 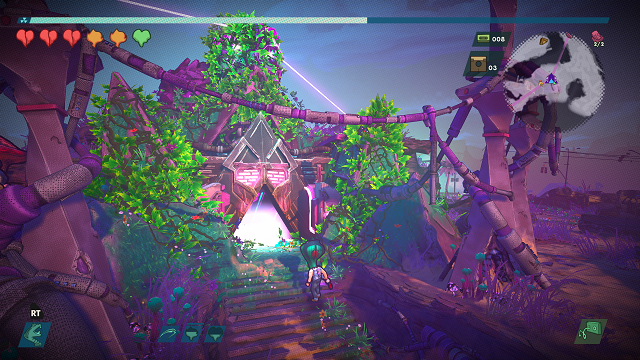 Already, Rad has a much higher concept than something like The Binding of Isaac. This continues into the game proper, which features a narrator occasionally spouting out lore and collectible data terminals. The latter is a pretty great addition, featuring logs of future folk trying to determine the meaning behind useless pop culture phrases from the 1980s. Speaking of, Rad is very much in debt to pop culture’s favorite decade. The visual style (including an on-by-default CRT filter) is bursting with color and over-the-top imagery. The soundtrack is the style of synthwave you’d expect in a nostalgic ’80s game, only accentuated occasionally with sounds from Namco’s arcade past.

Whether it’s the excellent utilization of Namco’s old IP (something more companies should allow) or its fun worldbuilding, Rad certainly has the style you’ve come to expect from a Double Fine production. That turns out to be both a blessing and a curse in the end. This is a roguelike, after all; a genre where repeating content is all but guaranteed. A good entry in the category needs gameplay that’s just plain fun or else the rest of it falls apart. There are certainly worse examples out there, but Rad‘s odd mixture of a top-down viewpoint with melee combat makes it harder than it should be to fully recommend.

Rad Review | Far from a no-hitter 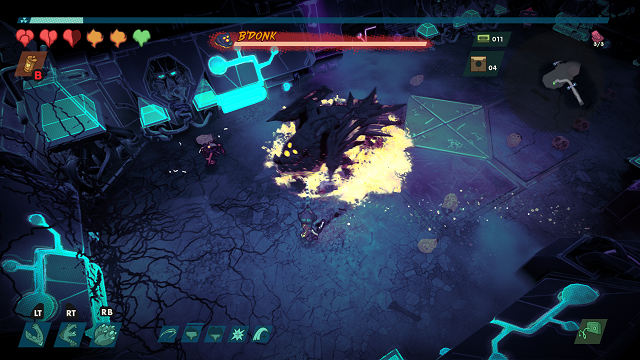 You start off Rad at a severe disadvantage to the slugs and creatures roaming the wasteland. Since your only weapon is a souped-up baseball bat, you need to get in close and swing, an action that keeps you standing in one place. Meanwhile, most of the enemies in Rad either charge you or shoot a range of projectiles. When combined, this leads to a lethal combination for anyone left wielding a melee weapon. You can’t avoid combat either, as the only way to mutate and gain new abilities is to rack up kills. This conflicting nature can make combat a little frustrating at times.

Roguelikes are random by design, but Rad‘s item pool is all over the place. Certain combinations that let you tear through the early game while others make larger fights seem futile. All of the most useful character upgrades give you ranged attacks. These abilities are way more useful than your default melee move, which makes sense on paper, but it’s a problem in practice. For one, the first 10 minutes of every run is going to be very similar. You need to bob and weave, get your hits in, and hope you don’t run into anything too dangerous while you build up your first upgrade. After that, you have to hope that said upgrade is actually going to give you an attack worth using. If you end up with some of the less desirable powers, you might as well just restart. 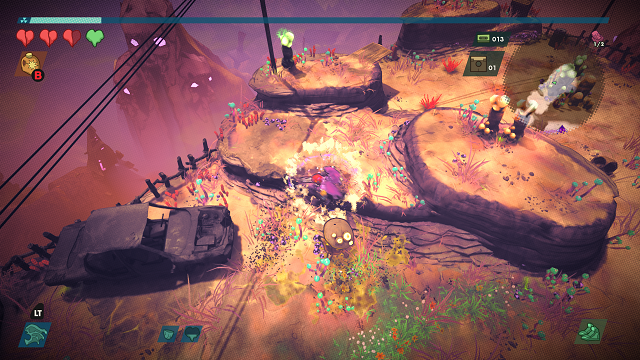 Of course, you might not want to restart. As you’d expect, Rad has roguelite progression, both for your cassette tape currency and for unlockable new items in future runs. If you’re early on in the progression, you’re incentivized to slog through a bad roll just to work towards making future runs more bearable. It’s a side effect of tying item rewards to combat. In a roguelike with more traditional treasure rooms, you can avoid enemies until you’re prepared. In Rad, you have to take risks to gain anything, and you might not like what you find. Once you do restart, you’ll have to wander through the starting area all over again. It’s a flavorful room full of neat touches, but Rad desperately needs to borrow the Quick Restart feature from Gungeon to alleviate some of the times the RNG screws you.

Despite some questionable design choices, it’s all worth it once you get a good roll of the dice. Powerful weapons in Rad make the game, and the desire to get a good roll is admittedly intoxicating. Even the less desirable ones change up the gameplay in interesting ways. For example, one mutation turns your feet into acid and lets you drop a trail of poison goop behind you. This leads to indirect gameplay where you’re kiting enemies into chokepoints before your trail evaporates. Another gives you gargoyle wings and lets you glide across the map, bypassing underground sections and revealing secrets. Powers like these are fun against smaller foes, but next to useless against bigger threats and boss monsters. 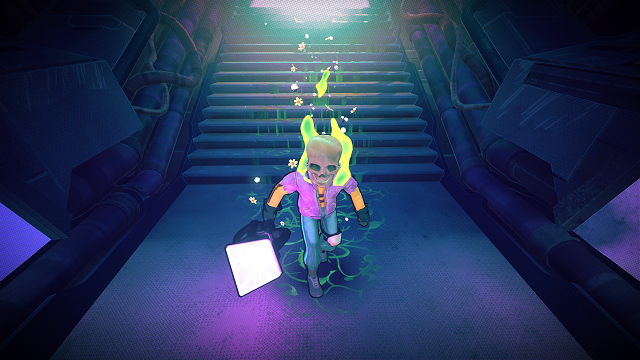 Rad also has a few unique twists up its sleeves. While it doesn’t have traditional treasure rooms, it does feature machines in the underground to give you smaller buffs. These usually act to prevent elemental damage or boost your health, both things that make fully exploiting each map very important. That makes each run rather long, even if you don’t end up making that much roguelite progress. It breaks the loop that all roguelikes strive for. You always want to be making progress of some sort, but there are too many blockades to that here.

At least this is all mitigated somewhat by Rad‘s most unique innovation. Since you now have magic wasteland powers, you leave a trail of grass and flowers wherever you walk. If you happen to walk back over that trail, you get a subtle speed boost, making backtracking much less painful. You also get a speed boost when you’re in the midst of a killing spree, and there are ample teleporters to get you around if you need them. It doesn’t solve all of Rad‘s repetition issues, but it’s a good attempt.

Taken as a whole, Rad does more right than it does wrong. Because it has some money behind it, it probably spends a bit too much time on worldbuilding and presentation. It’s all truly great stuff, but it ultimately gets in the way of the gameplay, making what should be a satisfying loop feel bloated. With luck on your side, the game transforms its middling action into a stunning mix of unique ideas and interesting combat. It’s all up to how much you’re willing to go through to get to those runs. With some tweaking and a starting ranged option, Rad could be one of the greats. Even as it is now, it’s probably still worth your time if you’re up for some ’80s themed procedural fun that only occasionally mutates into something mediocre.

GameRevolution reviewed Rad on Xbox One with a copy provided by the publisher.

It’s been a long time coming, but Season 2 of Alice in Borderland is finally about to arrive on Netflix.…
TV 1 month ago
6