Media often tries to capture the nostalgia of our childhoods but many don’t also incorporate what it’s like to actually be a kid. The imagination and innocence sometimes fall by the wayside in favor of neon, frizzy hair, and a glam rock or synth soundtrack. KNIGHTS AND BIKES focuses more on the emotional side of nostalgia with the more material ‘80s items being used primarily as peripheral set dressing to establish the tone. This decision helps Knights and Bikes in telling a more universal, heartwarming story with matching gameplay, despite the occasionally sluggish pacing.

Knights and Bikes derives most of its charm from its two leads, Demelza and Nessa. The former is a young, ginger native to Cornish island of Penfurzy while the latter is a preteen stowaway from the mainland who crashes into Demelza’s life at the perfect moment. Their friendship works because of how the two play off each other and capture the innocence of childhood but do so in slightly different ways. Demelza is naive and still looks at the world with an adorable and often hilarious innocence that most adults would kill for. Nessa, on the other hand, is also quite naive but her early preteen attitude peeks in every so often and shows that she is truly too cool for school. There’s also a fantastic goose who begs for food and shits everywhere and yet somehow still manages to be a great companion.

ALSO: How Knights and Bikes creator feels about the end of his long Kickstarter journey

The two girls share enough common interests between them to be good friends while also having as many differences to bicker and squabble about. They have their ups and downs and both are equally as enjoyable to take part in. Causing minor mischief around Penfurzy is cute and lets you experience their growth together by playing. But their fights also give the story some tension and tap into the insecurities and misfortunes any child could have. 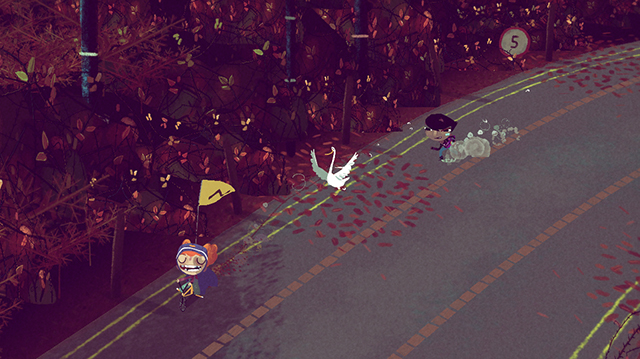 Those insecurities and misfortunes are the biggest narrative takeaway from Knights and Bikes as its story is adept at channeling those darker tones while masking them in a friendlier setting. Knights and Bikes is all about Demelza’s trauma and how her crumbling home encourages her to adventure in order to escape it. Since Demelza is no master storyteller, her backstory along with the island’s history is cleverly told through gameplay and clues dropped by her and the other characters. It’s presented in a way that you, the player, can piece together how she’s feeling even if she herself can’t properly articulate it.

As more of the story unravels, you begin to see what her true goals are and why she’s so dead set on finding this preposterous buried treasure. Heartbreaking moments are the natural balance to its general levity and the characters are fleshed out enough to earn these different tonal shifts. It’s not a saccharine tale of childish adventures nor is it a grim drama of death and misery; it’s a portrayal of both that gives a well-rounded view of being a kid and growing up.

Even though the more mature moments are what gives the story its heft and necessary anchor, the lighter sections are also as important to its atmosphere. Most of the world isn’t an objective reality, but one transformed by Demelza’s eccentric imagination. Inanimate objects take on a life of their own and silly folklore become real threats you encounter in the world. Nearly everything gets some sort of fantastical spin, making her an unreliable narrator, but one that makes the game significantly more interesting.

Knights and Bikes Review | The power of imagination 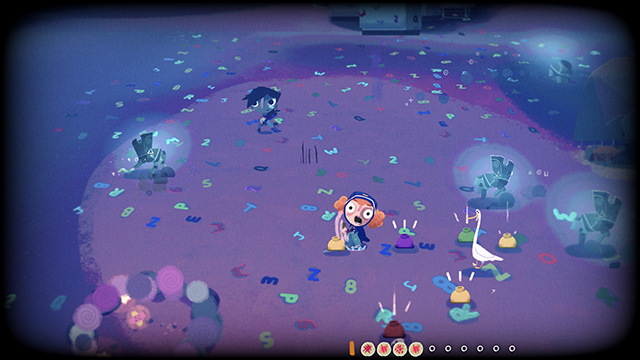 Her mental flair makes puzzles more involving as they often require some sort of impossible feat that would otherwise be a realistic and boring part of the game. Monsters breathe fire, the earth drastically shifts beneath their feet, and more are all exaggerated ways the game uses Demelza’s mind in order to create a more interactive and dynamic world.

Your array of gadgets exemplifies this as they are normal tools that take on otherworldly powers thanks to her brain. For example, a plunger becomes a landmine dispenser and a grappling hook when it’s all charged up. A legally safe Power Glove (called the Game Gauntlet) let you go invisible, hover, and possess enemies. Many of them are quite a stretch but the game gets away with it because imagination can make anything anything.

Concepts can only take these gameplay systems so far since they’re never quite as mechanically involving as they could be. Combat is simple and while there are inventive combos that utilize the unique ability sets of both players, there’s not much of a reason to perform them, especially if you’re partnered with the occasionally dense A.I. companion. Mindlessly mashing through combat will get you through the entire game as caution is never required. Combining powers and tougher enemies would make fights a bit more engaging; an area the game briefly flirts with before abandoning. It’s never a bummer to play as fights are a frantic spectacle that anyone can grasp yet that accessibility comes at the cost of depth. 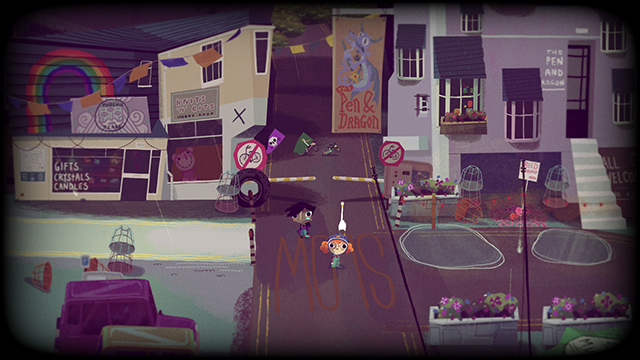 Puzzles are similarly acceptable and have the same downfalls along with a few new ones. Clever brain teasers pop up every now and again and let both girls mix and match their powers in creative ways in order to move on. Having to think of what gadgets to use can be quite, well, puzzling but not always in the good way that challenges you. The zoomed in camera angles can limit how you see the world and frequently obscures your way forward or a vital piece of the puzzle.

And some answers are pretty obtuse and those playing alone can sometimes can overly depend on the A.I. to drag you along. If the A.I. doesn’t pull your weight, you’ll have to run around yourself and listen to the incessant audio clip that plays during the running animation that loses its charm almost instantly. Like the combat, none of the puzzles are downright bad, but they’re not as tight as they could be.

Meandering around also drags down the pacing even more than its overly long stages do. Almost every level outstays its welcome for around 15 to 20 minutes anyway and that is exacerbated by the handful of vague puzzles that stretch out the game’s playtime. Knights and Bikes is at its best when it is moving at a brisk clip since its strongest parts are when you’re absorbing its story and not when trying to wrestle with its less impressive gameplay systems.

None of these give this game a flat tire as Knights and Bikes tells a wholesome story that leans more on ubiquitous experiences over particular nostalgic tent poles. Period-specific items obviously tie it to the ‘80s but it knows when to embrace its childish roots and when to reveal its darker self; both of which are universal aspects anyone can appreciate. The charm that covers nearly every inch of this game is also infectious, especially as this medium can better actualize its main characters’ imagination into something playable. Sometimes those playable aspects can get in the way but it’s still easy to saddle up on this bike even if that bike sometimes slams on the brakes.

GameRevolution reviewed Knights and Bikes on PS4 with a copy provided by the publisher.

The Roadhog nerf needed to be bigger.
News 3 days ago
8