If you were alive in 1999, you’ll almost undoubtedly remember The Blair Witch Project. It was a phenomenon, earning $250 million on a $60,000 budget, and spawned a whole genre of found footage horror movies. But, the franchise couldn’t quite find its footing. A sequel, Book of Shadows: Blair Witch 2, failed to find the popularity of its predecessor, and several video games, novels, and comics couldn’t make a splash.

In 2016, a direct sequel to The Blair Witch Project, titled Blair Witch, was released to a lukewarm reception. After that, it would seem that the franchise would once again go dormant. But, this is 2019, and intellectual properties only have to be recognizable, not actually popular or in demand, to get a revival. So, we have a new Blair Witch game, also simply called Blair Witch because no one who works in game development seems to appreciate how hard that is to SEO.

Blair Witch is an adventure/horror game by Bloober Team, who has made one game I like (Layers of Fear), one of my favorite games of all time (Observer), and one of the most boring games I’ve ever played (Layers of Fear 2). Since I absolutely adore Observer—and you should really go buy that game now—I’ve had Bloober Team on my radar for the last few years. However, with just how poorly designed Layers of Fear 2 was compared to Observer, I found myself somewhat anxious to see how Blair Witch would turn out.

Blair Witch Review | Into the woods we go. 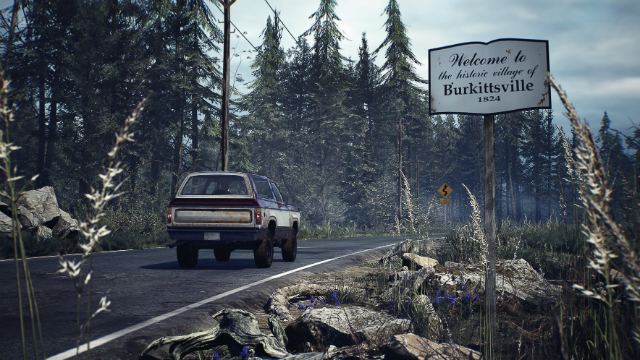 If you’re a fan of the franchise, you can probably predict that Blair Witch takes place in the woods of Burkittsville, Maryland. If you’re not hip to the lore, though, you’re out of luck since the game doesn’t make it a huge point to dive into it. A brief rundown is that in 1785 a woman was banished from the town of Blair for supposedly practicing witchcraft. She was tied to a tree, and they left her for dead in the woods outside of town. Then, during the winter, most of the town’s children vanished. The village of Blair was abandoned, and it sat derelict until 1825 when it was refounded as Burkittsville.

Basically, there’s a spooky lady in the woods, and she hates everyone. She also likes leaving little wood trinkets everywhere. Alternatively, she may not exist at all. Instead, she might be a delusion, either caused by mental illness or mass hysteria. Unfortunately, Blair Witch (the game) only really taps into the lore of the franchise for a basic setting. You’ll be in the woods, and there’s a bunch of creepy little wood crafts hanging around, but other than passing references, you don’t get anything examining the mythos near the level of the previous Blair Witch video games, particularly Blair Witch Volume I: Rustin Parr.

You play as Ellis, a man who has had quite a few unfortunate events occur in his past, which have left him rattled and unsure of himself. However, he tries his best to knit his frayed nerves together and head to the woods outside Burkittsville with his dog Bullet and aid in the search for a missing young boy.

I will say that Ellis is a compelling character, and his relationships with Bullet and the other characters in the game are complex and have an emotional punch. I found myself rooting for Ellis and Bullet as they trekked through the woods. The way Ellis never gives up on the search for the boy is in stark contrast to how he views himself, and the game does take a look at mental illness, particularly PTSD, and how it affects those who live with it and those around them.

Unfortunately, despite the story being fairly engaging, the gameplay left a lot to be desired in Blair Witch. 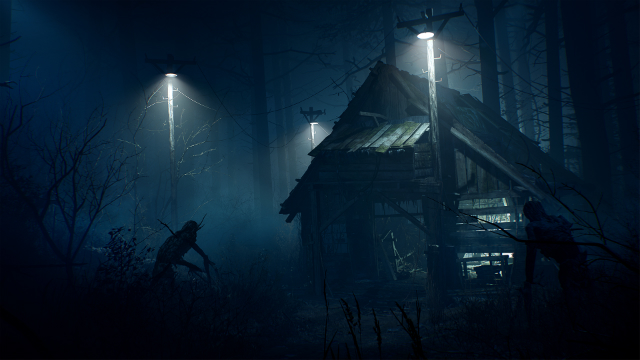 Blair Witch isn’t a very long game, but that’s not necessarily always a bad thing. I’ll take a stellar 5 hours over a mediocre 50. The problem is that even at around five to six hours, Blair Witch is too long. You walk so damn much in this game, and it’s unbearably dull.

For every 5 minutes or so of story content, you’re resigned to walk around in the dark woods for 15-20 minutes. It wouldn’t be a big deal if there were things to do in the meantime, but this game is basically just a first-person adventure game. There’s nothing to really worry about other than hitting the next story trigger, and in Blair Witch, finding where to go next and getting there is frustrating on a deep level.

As you’re stumbling your way through the woods, you’ll get into some combat. The Blair Witch is a very vague character, and as such, her methods are equally opaque. For some reason, her henchmen seem to be primarily men made of twigs. Unfortunately, you can’t just shoot the twigmen. Instead, your primary weapon is your flashlight. Twigmen have a severe light allergy, and so, if you shine your light on them they either die or run off, I couldn’t really tell which.

This is Bloober Team’s first foray into producing a combat system, so I have to cut them some slack. However, the fighting in Blair Witch isn’t the best. The twigmen move quickly, so you have to track them via Bullet’s movements. He’ll point towards any nearby enemies and bark, and you’ll have to shine the light in that direction and hope you manage to hit your foe. This ends up being more frustrating than scary as you’re really just focusing all your attention on keeping up with Bullet’s mad dash around the area.

There isn’t much combat either. Around halfway through the game your flashlight inexplicably just either stops working when enemies are around or starts making them mad instead of killing them. From there on out instead of semi-exciting combat you get to participate in long, grueling arbitrary stealth sections. Near the end of the game, you run into enemies who kill you if you flash your light on them, and have to follow a line painted on the ground lest you spark their ire. I’m talking like 20 or so minutes of this 5-6 hour game are spent staring at the damn ground. 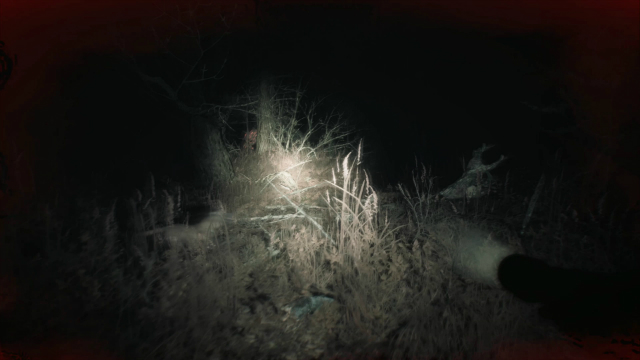 There’s no HUD, so Bullet ostensibly acts as a navigation aid, in addition to your best friend. However, this only works sometimes. During certain parts of the game, Bullet will catch a scent, and all you need to do is let him lead you to your objective. At other times, Bullet is little to no help, and you’re on your own.

There is a command wheel where you can ask Bullet to search the area, which can help find things you’ve missed, but sometimes it just doesn’t work. I’ve been in an area that had an item that I needed to find to trigger the next part of the game and Bullet would just scratch the ground and Ellis would say, “Nothing there huh boy,” only for me to finally run across an item only ten feet away.

Bullet is luckily a pretty steadfast companion and doesn’t require any babysitting. However, I felt Bullet was underutilized as a gameplay mechanic. Sure, he can point you in the right direction, and he points out enemies during combat, but that’s about it. There’s all of one puzzle that requires his assistance to solve (at least that I found) and even then it’s a matter of just pointing towards an area and hitting the interact button. 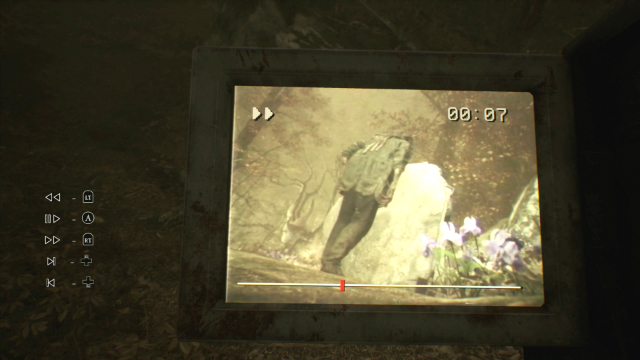 When you’re not wandering semi-aimlessly through the woods, there are some puzzles to solve. You get a video camera, which may be magical, which lets you change your environment when you watch certain tapes (the ones with red lids) found throughout the game.

These tapes usually depict something either horrific, supernatural, or both, and you can manipulate the environment by rewinding, fast-forwarding, and pausing the footage. For example, you might find a fallen tree in your path. If you review one of the videos in your possession, you can see the tree falling. You can then rewind it to the part before the tree falls, pause it, and you’ll see the tree is no longer blocking your path in the real world.

Unfortunately, this mechanic also isn’t used to its fullest potential. You’ll find quite a few tapes, but the solution to the puzzle they tie into is almost always immediately apparent. I would have liked to have seen puzzles spanning multiple tapes, or more complex interactions with the environment. As it stands, you’re usually just clearing a blockage or opening a door by manipulating the recordings.

Blair Witch Review | A witch of a game.

I really wanted to like Blair Witch, and there are parts of it that stood out as very well done to me. I think if it had been a leaner experience with less dead time, it would have been much better. As it stands, I found it hard to continue to care about Ellis’s plight when it was such a trudge going from point A to B.

It’s a shame the pacing does such a number on Blair Witch. It deals with some heady topics like PTSD, mental illness, and police shootings. Instead of hitting you hard and fast and hooking you, it lets your attention fade in between major plot points. Furthermore, it doesn’t use the Blair Witch lore to effect. You could have called this game anything and other than creepy wooden figures, Burkittsville, and a few references you’d be hard-pressed to identify it as part of the Blair Witch franchise. It’s a decent enough game, but it doesn’t live up to the franchise’s or Bloober Team’s best works.

Deals with mental health issues. Ellis's story was engaging enough. Dog and camera mechanics are interesting but underutilized. So much…
Friday

Deals with mental health issues. Ellis's story was engaging enough. Dog and camera mechanics are interesting but underutilized. So much…
February 10

Deals with mental health issues. Ellis's story was engaging enough. Dog and camera mechanics are interesting but underutilized. So much…
February 21

Deals with mental health issues. Ellis's story was engaging enough. Dog and camera mechanics are interesting but underutilized. So much…
February 24