I fear no man, no beast or evil, brother!

Critics be damned. Far Cry 3: Blood Dragon doesn't give a fuck about them. In fact, it actively doesn't give a fuck about them. How does someone correctly begin a "critical" review about a game whose aesthetic is awesomeness in the most stupidly power-fisted way possible? And by that I mean it's a love letter—nay, more like an infatuation letter—to nearly every male power fantasy in film, television, and video games in the late '80s and early '90s. Every reference you fail to recognize only makes you less awesome.

[In the deepest, manliest movie-trailer voice possible…] Sergeant Rex Power Colt is a new breed of soldier, a Mark IV cyber-commando on a mission of epic proportions to eradicate the Black Sector threat of Omega Force, by ripping out the still-beating cyberhearts of every last of its soldiers. Armed with a Terminator cyber-eye, a knee-sliding power punch, and Ron Perlman-level one-liners, he must save the world from the Randy Savage-armed clutches of the evil Sloan and save himself from the jaws of the ferocious blood dragon, twice the size of the normal Tyrannosaurus Rex and roaring with a bloodlust to shoot laser beams from its eyes. [End manly voice.]

Suffice it to say, Rex Power Colt eats the likes of Jason Brody for breakfast. After the nostalgically grainy introductory video and hilariously terrible tutorial, it becomes immediately clear that Colt can do pretty much everything that a fully tattooed Brody can do, and then some. He can breathe underwater indefinitely, wield any firearm with ease, fall from any height without damage, and perform chain takedowns, shuriken takedowns, ledge takedowns, and any number of other takedowns given the proper context. From there, earning experience points and leveling up grants him a much longer health bar, better resistances, firearm proficiency, and various badass perks.

Better yet, the story contains none of the hackneyed meta commentary on video game character cliches from the original Far Cry 3. Instead, Blood Dragon humorously and unabashedly embraces the stereotypes of this bygone era by making them relevant and satisfying all over again. The story may be ridiculous, the characters may be way over-the-top, and the VHS and TV set collectibles may be corny, but as long as the game is entertaining and doesn't take itself seriously, who cares? 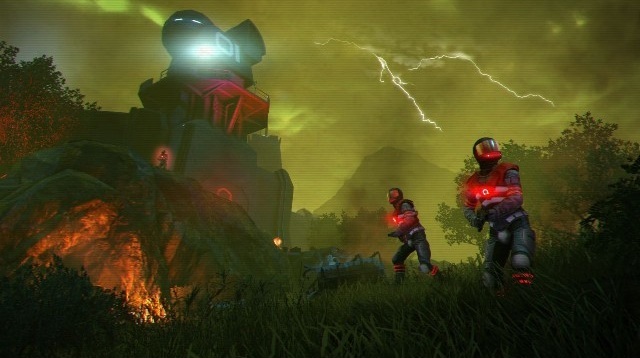 Blood Dragon essentially re-skins everything in Far Cry 3 with a better wrapper: pirates are now cyborgs that look straight out of a B-movie production (their power backpacks look like repainted vacuum cleaners), pirate island outposts are now neon-colored nighttime garrison strongholds, regular sharks are now cyber-sharks, the camera for tagging enemies is now a cyber-eye, and the stones for distracting enemies are now d20s. (That's right, you nerd!) The comparisons are numerous and straightforward, keeping the gameplay and objectives from the original title intact while creating a far cooler world.

When Rex isn't blowing up generators and protecting allies during main story missions, he can run wild in the free-roaming environment. As fans might expect, the goal is to clear the island of danger zones by conquering strongholds, find collectibles peppered about the landscape, accept side missions in the form of predator hunts and scientist rescue missions, and purchase new attachments for weapons at in-base vending machines.

Taking out strongholds can be done Rambo-style with guns blazing and many well-placed grenades, though being stealthy with takedowns, cover, and crouched movement is handsomely rewarded as well. Every stronghold has a green button that when pressed lowers the green shield surrounding it, allowing a blood dragon to charge in and chomp on every remaining fool inside (as you menacingly chuckle on the inside). 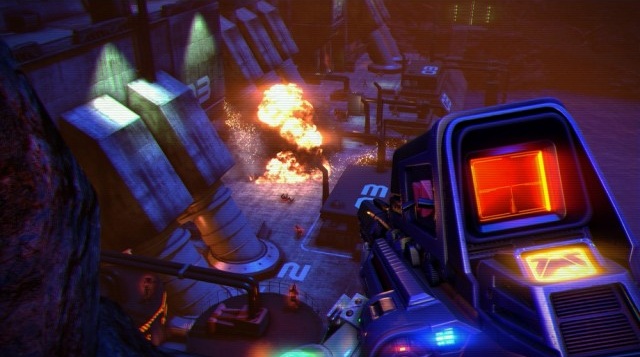 That said, since free-roam objectives aren't given much of a narrative context, they can get repetitive after a while. Items sometimes requires a bit too much precision to pick up, and the brightness levels can be too low particularly in caves. Some of the detection and line-of-sight mechanics can be iffy but also easily exploited. Once Rex obtains explosive rounds for the sniper rifle, everything becomes extremely easy.

Still, Far Cry 3: Blood Dragon is so bad that it's oh-so good. Though it doesn't aim to be the best shooter open-world experience ever, it's thoroughly gratifying—the amazing title screen, the jokes in loading screens, the heavily synthesized soundtrack, the whole damn thing. Throughout its roughly fifteen hours of gameplay, campaign and free-roam missions combined, Blood Dragon manages to transform much of its flash into actual substance. It is artistic by intentionally not being "artistic." Best of all, it's a standalone title that doesn't require the original Far Cry 3, and it's only $15. I pity the fool…

Code provided by publisher. Review based on Xbox 360 version. Also for PlayStation 3 and PC.

Ubisoft is closing the servers for several older games.
News 7 months ago

Xbox Game Pass gets five more games throughout the rest of June.
News 7 months ago