In Soul Sacrifice you play as an unnamed captive of Magusar, a sorcerer who devours souls. When another captive is killed escaping, in the rubble near your cage you find a magical talking book, Librom, who tells you he holds Magusar's secrets, and the secrets to your survival, if you read him to the end. Written by Magusar's mysterious former partner, the book reveals the game's story, lore, and missions that take you into the author's memories.

The first fifteen hours of Soul Sacrifice is a system-seller and one of the most engaging experiences I've had in a game in years. Its sense of depth increases at a consistent pace, and the handheld missions are perfect for bite-sized chunks of gameplay, but as the game opens further, it loses some of that innate awesomeness. But it's still there, provided you play the game the way it wants you to.

The primary task of sorcerers in the world of Soul Sacrifice consists of two actions: saving monsters or killing and sacrificing them. After a battle, mortally wounded monsters will return to their original form, and you can save them to level up your defense or sacrifice them to level up your attack. Larger boss-style monsters were actually once human, so saving them turns them into potential AI companions, while sacrificing them greatly increases your attack power, but they're gone for good.

Or are they? Soul Sacrifice's narrative reveals that the souls of the sacrificed live on in the right arm of the sorcerer who killed them. This includes their memories as well, which mix with those in the mind of the sorcerer. That question of whose memories are whose plays a part in the game's strong narrative as it unravels over time. Additional elements woven through include Arthurian lore (Magusar was originally named Merlin), a chalice of light (originally the Holy Grail) that grants wishes to those willing to make a worthy sacrifice (to often twisted results), and a society of sorcerers known as Avalon.

Reading the book between main missions lets players read the story (or listen to Librom read it aloud). It's a testament to the strength of the narrative, that even without cinematics or in-game reveals, I wanted nothing more than to finish the story and complete the game. The ending did not disappoint; in gameplay and narrative, the end battle is truly epic and lets you choose between two separate endings. 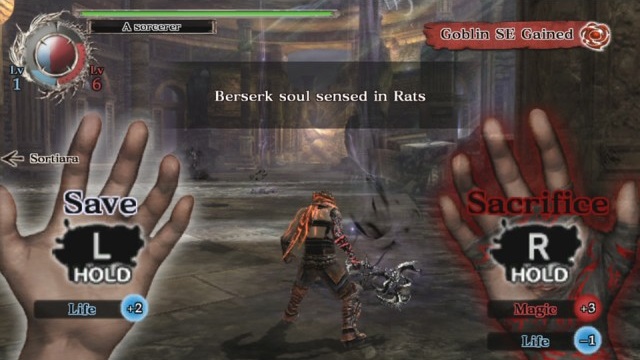 Gameplay in Soul Sacrifice is clearly inspired by Monster Hunter, with the focus on large targets with a great deal of health, vulnerable weak points, and elemental attacks. Of course, this comes with a sacrificial twist. To attack you use "offerings" received from the sorcerer society Avalon, thus completing missions to make new weapons. This has a very card-based feel to it, with limited slots for attacks and a limited number of uses for each, though the offerings can be refreshed by sacrificing monsters during missions.

The biggest surprise came after I was mortally wounded when an AI sacrificed me, creating a giant attack that did massive damage to the enemy. However, the game didn't end, as I thought it would. AI or player characters in multiplayer can save or sacrifice you to use these giant attacks, but as a ghost you can weaken enemies or strengthen allies by tapping on them with the Vita's touchscreen.

At around ten to fifteen hours, the game began to lag, but that was only because I had no one to play missions with online. The multiplayer section, though separate from the main story, is massive and makes up the bulk of available missions. Playing with others allows for four people to execute missions at once, with specific bonuses that yield better rewards from Avalon. 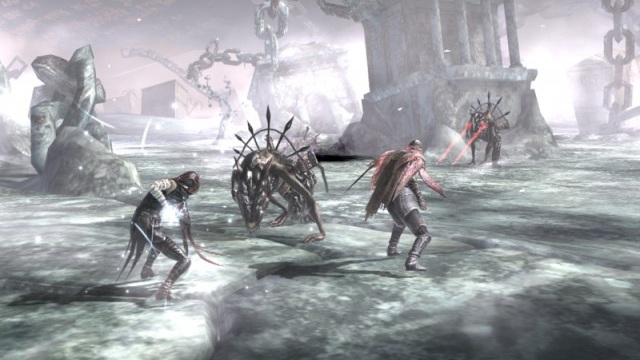 Playing this section of the game solo is a dreadful slog. Unfortunately, Online or Solo, these sections must be played to level your character enough to tackle the story missions. Additionally, playing solo only grants you two slower and less-capable AI companions compared to the potential three live players. This meant it took me about 40 hours to play through the game solo, whereas it probably would have progressed much faster if there had been more available online players. Keep in mind that this game is meant to be played with others, either online or ad-hoc.

Soul Sacrifice's design looks like it takes the bulk of its inspiration from Kentaro Miura's manga and anime dark fantasy saga, Berserk. I had to look in the credits to make sure that Miura wasn't responsible for the monster designs, since the resemblance is so striking. This gives the game a twisted fantasy look, with grotesque monsters that fit the narrative's warnings about greed and corruption. Replace the chalice with a behelit, and you could be playing a Berserk game from Griffith's perspective.

Audio in Soul Sacrifice is a huge highlight. Composed by Yasunori Mitsuda (Chrono Trigger, Xenogears) and Wataru Hokoyama (Afrika), the soundtrack has some of the best tunes I've ever heard in a handheld game (recorded with the Skywalker Orchestra), mixing epic bombastic battle music with horror-invoking strings. Additionally, while the other voices are solid, one of the reasons the story is so strong is the amazing vocal performance of Antony Byrne, who voices the narrator, Librom. 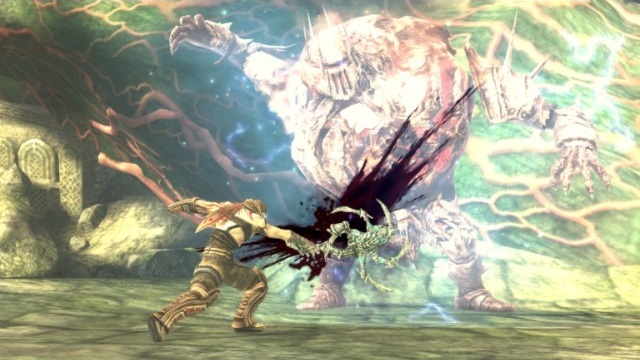 Soul Sacrifice isn't perfect, though. At one point I got trapped between a monster and an invisible wall several times in a row, where I died over and over. Some in-game character animations and voice work are a little rough (like the character's mouths not moving while they're talking) and the leveling and balance sometimes feel off. The game doesn't have a tutorial, but does have a section at the back of Librom with controls and instructions, which means those unwilling to read may get lost in some of the game's mechanics.

Still, Soul Sacrifice has me itching to buy a Vita (I borrowed the one I played the review code on), which is an accomplishment since my 3DS has been more than adequate for my handheld needs. Having completed the main story at 40 hours, there are still a ton of optional missions and upcoming DLC with new stories and new monsters to play. The game's creator, Keiji Inafune (Megaman, Resident Evil, Onimusha, Dead Rising), has stated he wants to make more; I'd sure love to see where he takes the lore in this rich world he and his team have created.

No one can hear you scream.
Games 2 days ago
7

It's the end of the world as we know it.
Games 3 months ago
9