'Cause two genres are better than one.

Sanctum 2, the sequel to the original Sanctum (duh), is truly one of a kind. Taking two of the industry's most popular, and arguably overused, genres of today and melding them into one creates something not only wholly fresh and unique, but also deeply complex and multi-layered. While it isn't without its fair share of flaws, Coffee Stain Studios' follow-up to the original Sanctum is unlike anything else out there and, for that very reason, shouldn't be overlooked.

Like I mentioned just a second ago, Sanctum 2 blends strategic tower-defense elements with first-person shooter combat. Each level plays out in a series of waves (think Gears of War's Horde Mode) where the player is afforded time to fortify the landscape by building and upgrading towers that will aid it holding off the impending wave of alien creatures that will soon be barreling toward the oxygen core he/she is tasked to protect.

Once the player has used up their allowed resources for the round, a wave of foes will begin spilling out onto the battlefield, as the player's character draws their firearm. From this point on—well, at least until the wave of enemies is destroyed—the game plays out like a first-person shooter, as gunning down the oncoming enemies before they wipe out the oxygen core becomes the primary, and only, objective. Aiming for the glowing red weakpoints on the devious creatures will do more damage, so a simple pray-and-spray approach isn't recommended.

Once a wave has been wiped out, the player is rewarded with additional materials that can be used to build and/or upgrade towers. Then comes the next wave. And the process repeats itself until all of the enemy waves have been defeated for that level. Thanks to the dual nature of the gameplay, things don't grow stale too quickly, but I won't deny the fact that fatigue definitely began to set in after just a couple of hours. 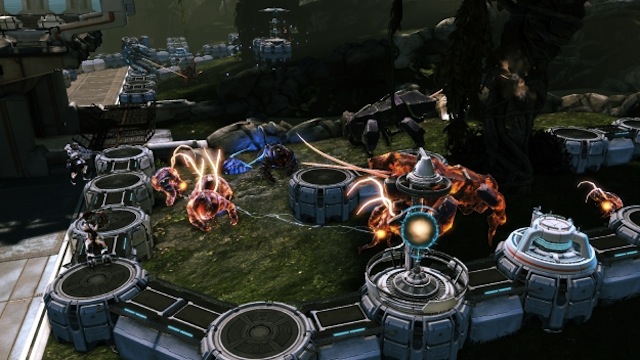 Fortunately, there are plenty of additions that will keep you coming back regardless, as the game allows for up to four player co-op. The fundamentals don't change, but the difficulty certainly scales depending on how many buddies are fighting at your side. Sadly, there is no support for local cooperative play, so you'll have to join online matches if you want to group up. That said, the matchmaking is simple and smooth.

Another way Sanctum 2 will keep you engaged is through its level of variety and customization options. Before each level you can choose one of four different characters. Skye Autumn is your typical run-and-gun assault rifle-wielding soldier, Simo is the super-accurate sniper, Sweet Autumn is all about explosive weaponry, and Haigen Hawkins is a powerhouse in close quarters. Each character plays quite differently from the next and the ability to level up allows for even more customization.

As players upgrade their characters, they can unlock new weapons, towers, and perks. Perks are particularly interesting in that they provide you with different bonuses that come in quite handy when you're looking for  extra edge in combat. Looking to deal a bit more damage? Want the oxygen core to regain a bit of health after each wave? There are plenty of different perks that are a blast to experiment with for each character class, and grouping up in a team only makes it all the more dynamic. 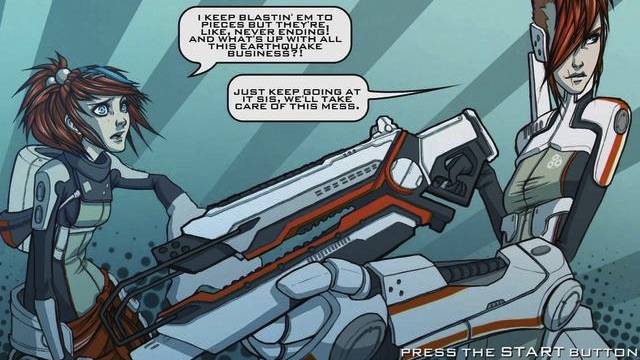 I must admit, when I first fired up the game, I was impressed with the menu screen. That may sound a bit ridiculous, but I can't help but judge a game (in part) by the first thing it presents me with on-screen. It's simple, sleek, and sports some excellent music. Sadly, the diversity in the soundtrack isn't quite where I was hoping it might be, but that's a minor complaint when considering this is a $15 downloadable title. But the story on the other hand…

Before jumping into each mission you'll be greeted with a loading screen that attempts to tell a story through a handful of comic book-inspired images. While it was a nobel attempt to keep players engaged while the game loads, I couldn't help but cringe at the pathetic attempt to shoehorn a story. Either go all-out and give me a full narrative or don't bother. Fortunately, the visuals made me forget all about such qualms. As you may have noticed from the images in this review, the game is quite eye-catching visually. The futuristic style is awesome and holds its own against many of today's retail releases. It won't make your eyes bleed with its beauty, but you can certainly find a lot worse aesthetically on the digital front.

Sanctum 2 is a unique game experience that is quite successful in bringing two of today's hottest genres together in an engaging way. Sure, there are plenty of tower defense games out there that do it better, and sure, the shooting mechanics aren't up to snuff with the best of the bunch, but Coffee Stain Studios' is more than the sum of its parts. If you're looking for a fun, multi-layered time-waster that you and your online buddies can enjoy, give this one a look.

Code provided by publisher. Review based on Xbox 360 version. Also available on PC (and PS3, soon).

Unique blend of FPS and tower-defense Gorgeous visuals Four-player co-op... ...but not on the same couch Plenty to customize Feeble…
Today

Unique blend of FPS and tower-defense Gorgeous visuals Four-player co-op... ...but not on the same couch Plenty to customize Feeble…
February 3

Unique blend of FPS and tower-defense Gorgeous visuals Four-player co-op... ...but not on the same couch Plenty to customize Feeble…
February 10

Unique blend of FPS and tower-defense Gorgeous visuals Four-player co-op... ...but not on the same couch Plenty to customize Feeble…
February 21

No one can hear you scream.
Games 9 hours ago

Well, we weren't expecting that!
News 1 day ago

The Roadhog nerf needed to be bigger.
News 2 days ago