Disney Classic Games: Aladdin and The Lion King Review | More to do than can ever be done?

Whether you believe it or not, there was a time when licensed video game movie tie-ins were good. Aladdin and The Lion King were two of the finest examples of such games back then and have both been brought back to life by Disney and Digital Eclipse (the developers behind Mega Man Legacy Collection and Disney Afternoon Collection) on Nintendo Switch, PS4, Xbox One, and PC as DISNEY CLASSIC GAMES: ALADDIN AND THE LION KING. Given the breadth of content and respectful amount of extras, it’s the definitive edition of these games for those who have fond memories of them while also being a decent package for people who want to dive into these licensed titles from decades ago.

Setting you back around $30 on whatever platform you choose, Disney Classic Games: Aladdin and The Lion King offers up what first appears to be a solid amount of content. The Genesis edition of both Virgin Interactive Entertainment-developed Aladdin and The Lion King are included in the HD port collection. For The Lion King, you can play its Genesis, SNES, Game Boy (black and white original and in color), and Japanese editions. For Aladdin, you can choose from its Genesis, Final Cut, Trade Show Demo (which hasn’t been available since 1993), and Game Boy (again, both black and white and color) versions. However, the absence of the Capcom developed SNES edition of Aladdin is immediately noticeable. This is a shame, for sure, but it’s likely to do with licensing issues. The lack of the Game Gear versions is a shame, too, as it does feel incomplete without them.

Disney Classic Games: Aladdin and The Lion King Review | Oh yes, the past can hurt 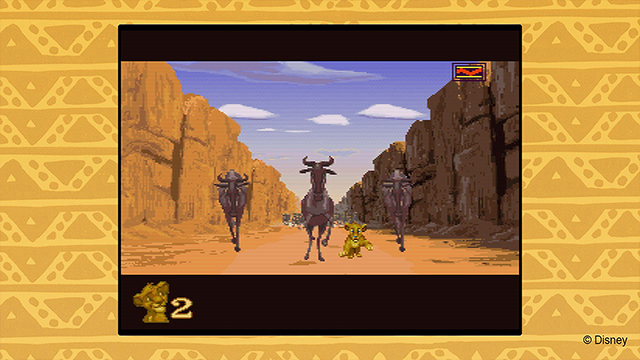 Despite the fact that the SNES edition of Aladdin is absent from this collection, there is a good amount to get on with here. Playing through each of the different versions of both games will take a good few hours, especially thanks to the added difficulty settings. Although it’s hard to imagine anyone getting much of a kick out of playing either of these games on higher difficulties. Both Aladdin and The Lion King are among the most difficult games from that era that people still remember fondly. The Lion King, in particular, is hellishly frustrating.

Everything in The Lion King wants to kill you. It’s unfair in its level design and enemies, which range from annoying to nearly impossible to deal with. You’ll be failing to outrun boulders, navigating your way through lava-dripping volcanoes, and fighting against bastard hyenas and vultures. Turning the difficulty down to easy does help a little, but the collection’s rewind feature makes things less stressful so you can actually complete these games once and for all. Take that, Scar.

Disney Classic Games: Aladdin and The Lion King Review | I laugh in the face of danger 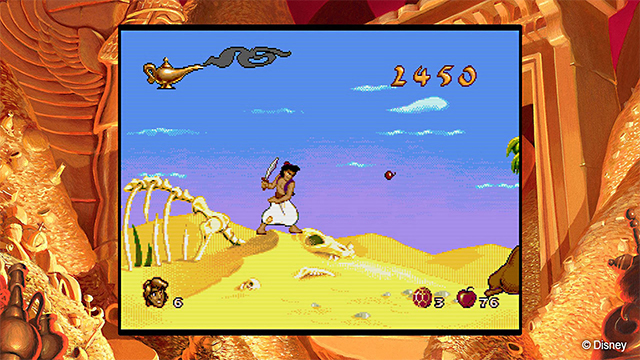 While it may feel like cheating, you can rewind the game at any time, but you can only go back so far. It’s alluring to do, and you’ll feel guilty at first, but by the time that damned hyena has killed you for the third or fourth time, you won’t care anymore. It’s undeniably helpful, at least for an initial playthrough. Besides, you will still need to do everything right in order to complete the game. You don’t have to use the rewind feature, either, if you’d rather play the games how they were originally designed. But only the most stubborn and sadistic players will go down that dark path.

Other useful features include being able to watch a playthrough of either game and jump in to control the action at any time through the pause menu. It’s a neat system that allows you to see how the game is meant to be played if you’re struggling with any particularly tough moment (of which there are many). These new features, along with being able to save your game, are all excellent quality-of-life improvements to these visually impressive and fun (if exceedingly difficult) classic movie tie-ins.

Disney Classic Games: Aladdin and The Lion King Review | It’s all so magical 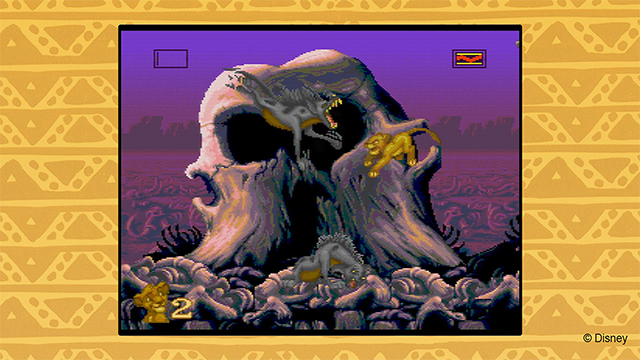 The Disney Classic Games: Aladdin and The Lion King collection is also a looker even in 2019. The vibrant animation and colorful sprites of the original games jump off of the screen thanks to the work that has gone into porting these games to HD consoles. You are able to choose between several different visual effects while playing, too, such as screen size, a border or lack of, and overlays such as if you were playing it on an old school CRT or LCD screen. Thanks to the sharp visuals, this collection is the best way to play both of these games. Aladdin, in particular, looks great, as it has detailed, lively animations of the titular protagonist and most enemies you come across. It is by far the better game of the two, thanks to its generally more fair difficulty and level design.

Despite it missing its SNES version, Aladdin has gotten the star treatment here because of the Trade Show Demo and Final Cut versions of the game. Available for the first time since 1993, the Trade Show Demo of Aladdin features levels that are fairly different from what you’ll find in the finished game. The Final Cut version, meanwhile, is perhaps the best way to play Aladdin. It’s a newly developed version of the game, with bug fixes applied along with a couple of new extra sections in a number of levels.

Disney Classic Games: Aladdin and The Lion King Review | You got to put your behind in the past 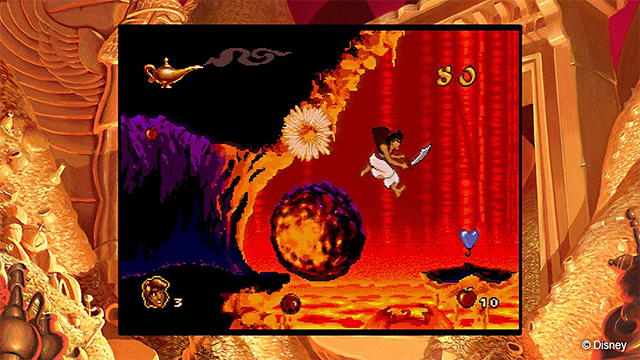 Unfortunately, however, neither game has completely stood the test of time because of the constant deaths and requirement of pixel-perfect jumps. Swinging between rhino tails in The Lion King and jumping up between moving stones in Aladdin spring to mind as frustrating examples. Both games also feature too many moments where you simply can’t quite see what you’re meant to do, or where you’re supposed to go. It’s a shame that the collection didn’t zoom the camera out a little so players could see more of the environment. But this is a port, not a remake, so it is understandable.

The Game Boy versions of both The Lion King and Aladdin don’t stand up to the test of time at all. These are slower, smaller, and worse versions of the home console editions of the same game. Despite this, it’s nice that they are included in this package. While not the main attraction, the Game Boy Aladdin and The Lion King act as curios, taking us back to a time where inferior handheld versions of games were commonplace. The small graphical and sound differences are minute, but seeing the differences between the Genesis and SNES versions of The Lion King is certainly interesting.

Once you are finished with all of the different versions of both games, there are a good number of short documentaries to watch. They detail a good amount of behind-the-scenes goings-on and development stories from back in the day. These are interesting watches for the most part, but far from essential. The same can be said for the movie art and musical collection. Even though they aren’t the meat of this collection, it shows how complete this package is, more or less.

While neither game has stood the test of time without any blemishes, Disney Classic Games: Aladdin and The Lion King is a solid collection full of behind-the-scenes tales from development as well as nearly every edition of both games available. You might not remember how difficult either of these games were and you will find yourself shouting colorful language at colorful hyenas and parrots, but this collection will take you back to the days of entertaining movie tie-ins. Despite the missing Capcom-developed SNES Aladdin, it’s a solid collection for both those who struggled through the originals as well as those curious about these difficult Disney platformers from yesteryear.

GameRevolution reviewed Disney Classic Games: Aladdin and The Lion King on the Nintendo Switch with a code provided by the publisher.

All versions of Aladdin and The Lion King have been faithfully restored with crisp HD visuals. Aladdin is still a…
Friday

All versions of Aladdin and The Lion King have been faithfully restored with crisp HD visuals. Aladdin is still a…
February 10

All versions of Aladdin and The Lion King have been faithfully restored with crisp HD visuals. Aladdin is still a…
February 21

All versions of Aladdin and The Lion King have been faithfully restored with crisp HD visuals. Aladdin is still a…
February 24

The Nioh Collection Review | ‘A definitive duo of difficult classics’

Double the death, double the pleasure.
Games 2 years ago
8