Are U Ready To Wii Party?

The original Wii stole the hearts and living rooms of casual gamers everywhere thanks to a solid offering of extremely easily accessible games and cutesy video-game self-portraits turned avatars called Miis. Although a few subpar third-party publishers have given the party game genre a try on the Wii U, they’ve failed on fun-factor miserably thus far. Now it’s Nintendo’s turn to show everyone else how to throw a proper party on the Wii U.

But before you break out the keg and the beer pong table, know that this party is for families and children. As such, many of the main modes of play as well as the mini-games themselves are lighthearted and easy to pick up, but lack in substance. That’s not necessarily a bad thing, though, as the learning curve and overall difficulty level are well-suited for the intended audience.

The game is divided into three main gameplay modes: TV Party, House Party, and GamePad Party. You can also play all of the mini-games on their own, or even round up to four players for a mini-game marathon complete with organized tournaments and more. Allowing the freedom to play these mini-games is a wise decision, as the bulk of the fun are in the mini-games themselves more so than each of the three modes.

TV Party has a few different options to choose from, but they all essentially play similarly to the board game style of Mario Party. There are some slight variations between them, and oddly enough, the most interesting choice is the Mii Fashion Plaza that has you landing on spaces and facing off in mini-games to earn individual pieces of an outfit that you end up strutting on a catwalk for points to win. It’s quirky, and a fun deviation from the standard board gameplay. However, this mode feels as if it were designed for the Wii, not the Wii U, as the GamePad is rarely touched and the gameplay relies on Wii-motes in each player's hand. 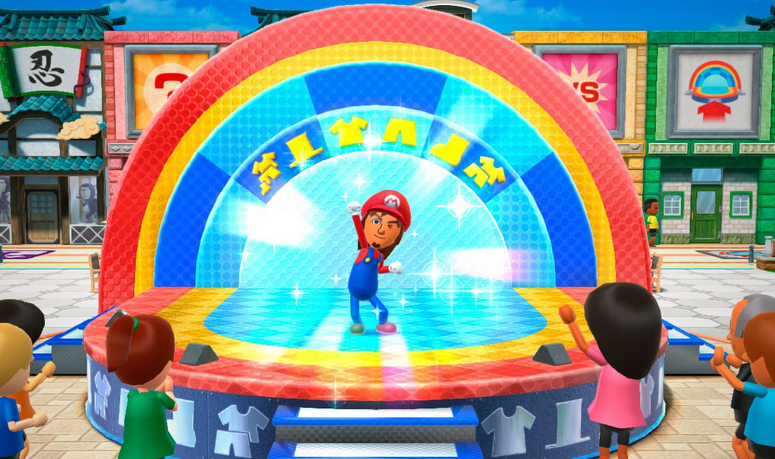 On the upside, House Party does take advantage of the GamePad in some interesting ways I’ve yet to see in any other game. None of the main choices are particularly game-changing, but they do provide some fun ideas unique to Wii Party U. One such example, Name That Face, takes advantage of the GamePad’s built-in camera, having each player try to imitate whatever goofy facial expression the situation calls for on the GamePad screen. Meanwhile, the other players who cannot see what expression the game is asking for, must then guess if the GamePad player has mud in their pants or has eaten too many hot peppers.

Another less successful example puts the GamePad on the floor, displaying a flowing river, while each Wii-mote acts as a ladle to scoop water from the river and fill an in-game jug on the TV screen by walking toward the Wii U sensor. It’s a clever idea, but the execution is clunky, and getting the GamePad placement in correlation with the Wii-mote took some frustrating maneuvering. 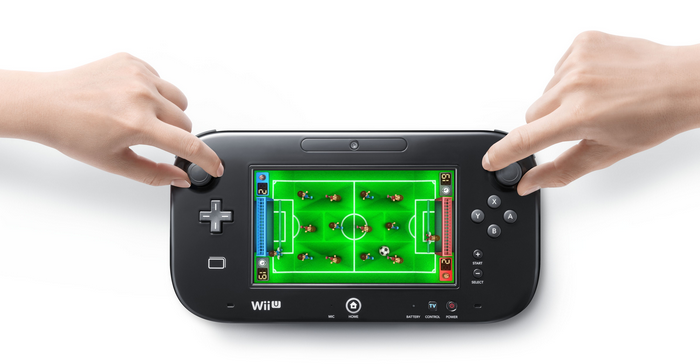 GamePad Party mode isn’t much of a party, since the majority of these games are for two players only, but it offers my favorite mini-games of the bunch. Here, both players grab one end of the Wii U GamePad, giving them half the touchscreen, an analog stick, and trigger buttons as a means of input. This layout allows for a GamePad-only game of Tabletop Foosball or a spoof of Rock ‘em Sock ‘em Robot boxing. Although I did enjoy these games thoroughly, they are among the most blatantly lacking in depth, leaving me a bit on the unsatisfied side, wondering what could have been if the mode was developed to its potential.

Throughout all of the modes, the mini-games, albeit short in nature, are the biggest timesink and where the majority of the fun will be had. Some are competitive in nature, while others require collaboration between one or more players. All of them are new but feel familiar enough if you’ve ever played even one Mario Party game. The way they’re presented and explained is ripped right out of Mario Party, as it does such a great job of demonstrating how to play each different game with minimal instruction. 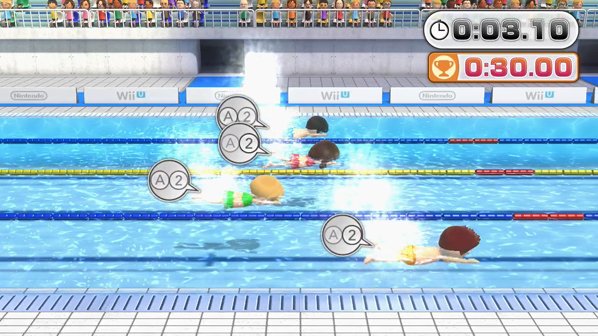 I feel that the game is called Wii Party U, not Wii U Party, for a reason, and that’s because ultimately Wii Party U feels more like a Wii game on the Wii U. The GamePad isn’t used to its potential and is tossed aside on many of the games and almost all of the mini-games. The fact that the game comes bundled with a Wii-mote Plus says a lot about Nintendo’s in-game design.

And after seeing how beautiful HD Nintendo games can be with New Super Mario Bros. U and more recently, Wind Waker HD, the visuals in Wii Party U are a major letdown. Not even the at-first-hilarious-but-soon-terribly-annoying announcer guy, Party Phil, who sounds like he’s speaking muddled pipsqueak Italian, can make up for the last-generation look of the graphics and presentation.

Still, despite lacking depth, visual flair, or the characters of a Mario Party game, Wii Party U is a strong enough party game for Nintendo to offer families on the Wii U thanks to one thing: the mini-games provide hours of fun. Packing it in with a Wii-mote Plus for the price of $49.99 adds value to help make up for some of the game’s shortcomings, which are likely to go unnoticed anyway by the casuals and families who will find the most enjoyment in Wii Party U.

Mini-games are a blast... But are lacking substance Luckily there are so many of them to make up for it…
Friday

Mini-games are a blast... But are lacking substance Luckily there are so many of them to make up for it…
February 10

Mini-games are a blast... But are lacking substance Luckily there are so many of them to make up for it…
February 21

Mini-games are a blast... But are lacking substance Luckily there are so many of them to make up for it…
February 24

No one can hear you scream.
Games 4 days ago
7

Critical Role Criticized Over Lack of Response to D&D’s OGL 1.1 and 2.0