PAC-MAN and the Ghostly Adventures Review

Anybody need a good flashback?

After over thirty years, Pac-Man has become one of those characters that every generation has at least heard about, and more likely than not has played a game of. Thirty years. That's enough time to have determined, through the growing development of the "video game" as we know it, just what makes a great game great and an iconic character, well, iconic. After a few attempts, the franchise has reached Ghostly Adventures… and a three-dimensional attempt at inserting the Pac into a Super Mario Brothers choose-your-stage play field.

Now, while that might sound like a great achievement—SMB3 is one of the very short list of games I would consider anywhere near "perfect"—it makes the package feel dated, stuck in a sort of time vortex that can only point out the shortcomings of the genre, and made me think about just how far we've come since Nintendo's little toaster.

Pac-Man and the Ghostly Adventures stars the single-slice-missing Namco mascot scrambling through missions in multiple-themed worlds, with only a handful of levels in each, and chomping down on copious volumes of ghosts and some beasts that, well, I can't tell WHAT some of them are supposed to be. There are on-fire bats at one point, but the bigger baddies are some kind of demon, or maybe a neighborhood stray with some glued-on horns or something. They're just so specifically weird that it's difficult to explain, but they're too generic to be actually interesting.

The stages that litter each "world" are usually short, maybe ten minutes or less on average, and a few have bosses or "get up to this point" finishing goals. The problem is that they're overall very unsatisfying. Very few boss battles come about at the end of stages, and others wrap up so abruptly and with so little fanfare that I actually laughed aloud and yelled "That's IT?" on multiple occasions. And while I know this game is for kids, the difficulty curve fluctuates throughout regions; one stage might have a "reach this point" without ghosts in sight to spit acid or tornado-spin their way into your grill, and the next is just an awkward onslaught that's inescapably annoying. It's a good thing the Playskool-adjacent rounded edges and colorful paint job looks as friendly and engaging as it does; otherwise, I might've been angry.

Each level is remarkably easy, though that's to be expected. Ghosts are everywhere (still don't understand why, must've been a lot of dead people in Pacopolis) and stages are simply navigated with the occasional twist dropped in. There isn't much to tie them to one another, instead seeming like they were made simply because a designer said, "Okay, we need more levels. Can we give the volcano world more levels? And wait, why can't we tie them together with the ice stages, like it's all frozen over and a different place or something?" 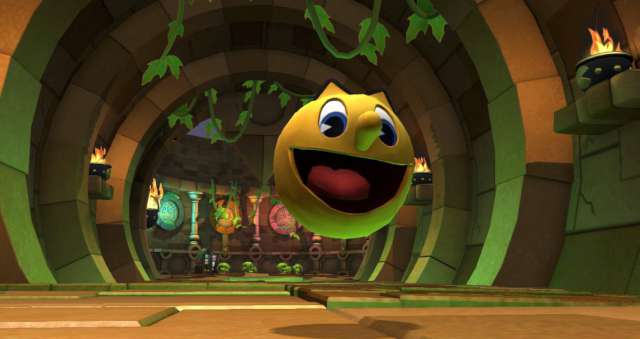 The story, in turn, is… well, have you ever asked a six-year-old to tell you a story? The way they backtrack to fill in the plotholes and create new characters and interesting tidbits on the fly? Ghostly Adventures is just like that, only written by adults like that. There's constant introduction of "oh wait, you have to do this" and "I forgot to tell you about this" littered through the generic, kiddy-inspired landscape. You'll have your friends be kidnapped, and the main "smart scientist" will tell you to go after them, but he forgets until you remind him. Human lives (or "Pac-man" lives, perhaps) are at stake, you ditzy bastard! Pay attention!

At least the graphics look nice. I don't make the Playskool comparison lightly (for our out-of-country friends, I'm talking about a kid's toy company), because everything feels padded somehow, with rounded edges and bright colors and never a hint of "edge." I know this is designed for an E10 audience, but if parents are going to play at all with their kids, why not have something for them aside from that overwhelming "I've played this before" vibe? It's almost too tailored for younger players, if that makes any sense. Might be nit-picky, but it's the truth.

The game also controls well… with one exception. A fireball-wielding Pac-Man is fine, ice beams are cool (see what I did there?), and even Ball-Pac with the easily made-into-a-testes-joke name works well enough. But whoever thought of Balloon Pac and its "I hate life and all shall suffer" controls should be docked. And by "docked," I mean inflated like a balloon themselves and left tied to a pier.  That's how much I despise that "power-up" and level design, where it's ridiculously easy to lose "inflation" and fall into a bottomless pit. Later levels can easily lead to awkward angles and unnecessary deaths, even though by then you'll have plenty of lives to waste. 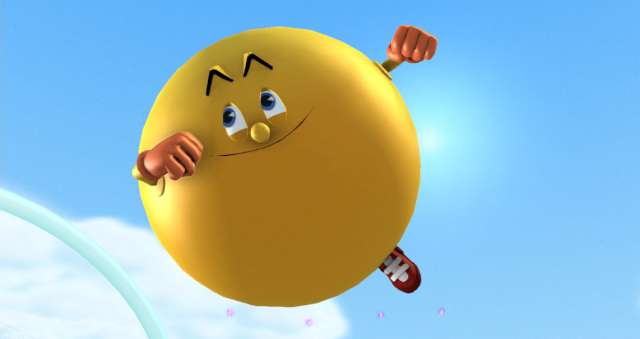 There is a multiplayer mode, sans online, to play with friends, but it's a handful of maps that are only available on one console. It has players take on the role of the ghosts, searching the maze to stop Pac-Man… and that's it. Just points for eating fruits, some minor power-ups that aren't very intuitive, and all of it with scattered smack-talk one-liners. It's as basic as things get, like the original Pac-Man… which it is. I guess for a few rounds it's amusing, but without any online play it gets really stale, really quickly.

PAC-MAN and the Ghostly Adventures as a whole, though, is really not too bad, so long as you know what you're getting yourself into. It's designed for kids, tying into a new Pac-Man animated series, and even with those two game-killing modifiers attached it's moderately fun. I do wish the odd sexual chemistry Pinky and Pac have would settle down a bit at the school.

You think I'm kidding? I'm not. It's creepy.

Copy provided by publisher. Review based on Xbox 360 version. Also available for PS3, Wii U.

I write a lot. Plenty of it for GameRevolution, sometimes on my own.

Looks good, rounded, and clean Difficulty not too high for kids Multiplayer is old-school... and bland "Story" is badly told…
Friday

Looks good, rounded, and clean Difficulty not too high for kids Multiplayer is old-school... and bland "Story" is badly told…
February 10

Looks good, rounded, and clean Difficulty not too high for kids Multiplayer is old-school... and bland "Story" is badly told…
February 21

Looks good, rounded, and clean Difficulty not too high for kids Multiplayer is old-school... and bland "Story" is badly told…
February 24