While some video games have their gameyness constantly questioned, famed designer Keita Takahashi has embraced that space with his titles. Noby Noby Boy is probably his most famous of the lot as it was about eating, pooping, stretching, and feeding those stretched inches to Girl, which is more PG than it sounds. WATTAM is the oft-delayed next game in this odd, unnameable genre and has a lot of the same frustrations seemingly inherent to those games while also maintaining a similar level of charm.

And Wattam goes all in on that charm and assaults you with it at every turn. The game is drenched in bright colors akin to the cover page of a children’s coloring book. Every inanimate object almost always has a smile pasted on the front of it as they bounce to their own beat and interact with each other. 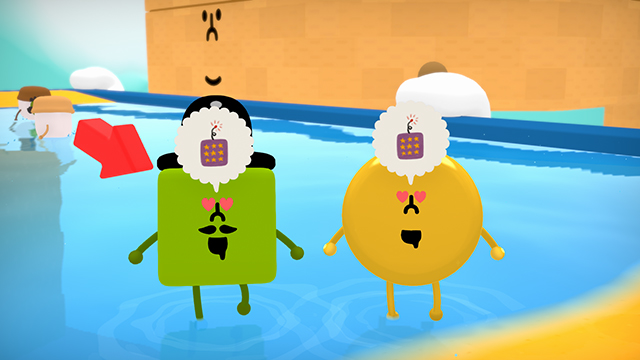 The soundtrack is the most vivid example of its joyous outlook. Not only is the main theme a delightful track with upbeat vocals but it’s also supplemented by similarly happy melodies that dynamically change as you play the game. Each character has its own twist on the current song, adding more instruments as you switch to them complete with a fart that syncopates with the rhythm when you are controlling a poop. These tracks are unlike most other game music and would have been just as pleasant as is yet work even better as they reacts to your actions.

Wattam is more of a toybox so those actions aren’t about intense shooting or platforming, but more in the vein of light puzzles and interacting with the other characters. Some have their own quirks but many are there to be climbed on, grabbed, crapped out, or eaten but hopefully not in that order.

ALSO: Wattam and Katamari creator talks being canceled by Sony, poop, and embarrassment

The Mayor’s ability to explode is the highlight among those less exciting interactions as the characters absolutely love being blown up. Alas, it’s a nonviolent explosion so it’s all cheers unless this is some sort of extremely subtle, twisted terrorist recruitment tool, it’s all in good fun to see everyone get blasted into the stratosphere and giggle on the way down. 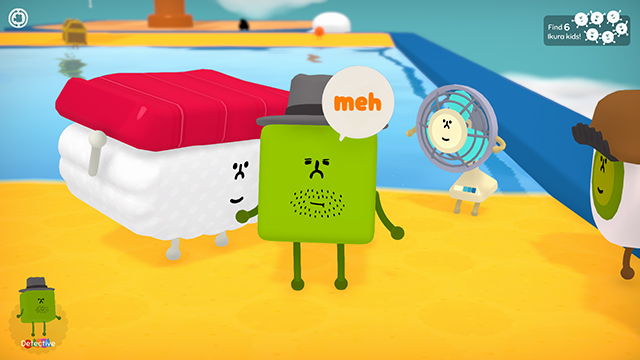 But the explosions point out the biggest problem with the game: its controls. Exploding is designated to the same button that triggers interactions and it can be extremely finicky. Walking up to someone to progress the story can be interrupted if you happen to press the interact button on the nanosecond that the prompt switches from “Talk” to “Explode.” Watching Wattam trigger a glitter explosion is entertaining when you want it to happen, but tedious when you have to watch it all slowly unfold on accident.

These hiccups extend to camera, too, which is far more problematic. Like Katamari Damacy and Noby Noby Boy before it, the camera isn’t on the right analog stick. Here, it’s on the shoulder buttons and never feels quite right. Erasing decades of such a consistent pairing — the right stick and camera — is hard to shake and the game suffers for it as you constantly change characters instead of the viewpoint without meaning to.

Accidentally swapping to another character points other flaws in the game’s controls, too. Many beings cloud the screen and and pointing the analog stick and the exact one you want to play as is frustrating because it is nowhere near as precise as it should be.

You’ll often bounce back and forth between the dozen characters on the map before you finally get to the one you want. It’s needlessly tedious to wrestle with the game and twiddle back and forth between every colored poop on the map except the one you need to control. There is a menu you can pull up to scroll through everyone, but its precision is undercut by how slow it is and how it adds an extra step to the process.

Despite the Mayor’s role as the central character, you will usually have to switch around and use those other objects to complete the game’s puzzles. “Puzzles” might be overstating it, but you’ll often need to figure out how to use its limited verbs to trigger the next objective. Challenge seems to only derive from obtuse solutions as most of them are quite easy, but Wattam’s absurdity helps excuse its mechanical banalities.

It is more toy-like than video game-like and while that is a conceptually sound way to open it up to newer, less experienced players, its structured campaign and price point invite it to be a little bit more than it is. For comparison’s sake, Noby Noby Boy was less traditionally gamey and had the price and laid-back setup that fit that design. With a linear story mode and $20 (or $30 for physical) price point, Wattam is positioned as a slightly more demanding experience that it isn’t quite suited to be. 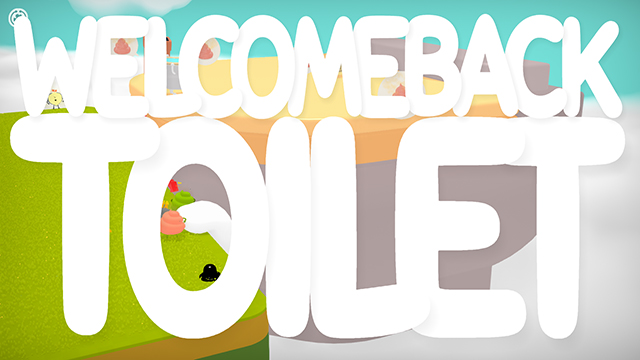 But regardless of positioning, its random,playful humor benefits from these dips into the weird. Finding a piece of sushi’s kids so you can feed a tree is nuts, especially when some of these events trigger an all-caps intro for some giant, random piece of furniture drift in via a portal from space. Seeing “WELCOME BACK TOILET” and comparable statements fill the screen is hilarious and vibes with its weird bits, culminating in a unique sense of humor that can work for all ages. Of course, this is lovingly buoyed by its fascination with poop and farts.

The anticipation of seeing what off-the-wall events happen next is partially given context through its story. The world has exploded. Its many objects have scattered among the cosmos. They are alone within the void until the main character, the blocky Mayor, befriends an innocent rock. From there, it loosely grafts itself onto a story about reconnecting and bringing all of the world’s objects back together, hence why you will “WELCOME BACK TOILET.”

It’s a tale with noble intent as it touches on themes of community and while it might go further than you’d expect, it doesn’t quite go as far as you may hope. These interspersed bits of story jump out suddenly during the campaign and demonstrate that there is a reason why you need to bring an onion to a sandcastle so it can cry itself a moat. While not a strand game, Wattam’s fascination with connection could have been better served if had a stronger story to back it up. Perhaps it could have been a kid-friendly, significantly less convoluted version of Death Stranding if it fleshed out its narrative just a bit more in the right ways.

Both titles do share a connection with number two and while Death Stranding is more focused on weaponized excrement, Wattam is content with having you chuckle at its poo, which is symbolic of the game’s successes. Witnessing its wholesome, nearly childlike view of the world through a bunch of nonsequiteurs is pleasant even if playing through them isn’t always quite as enjoyable. And while Wattam seems to want to avoid descriptors and can get away with it at times, that playability is important for a video game.

GameRevolution reviewed Wattam on PS4 with a code provided by the publisher.

We've got to go back!
Games 5 days ago